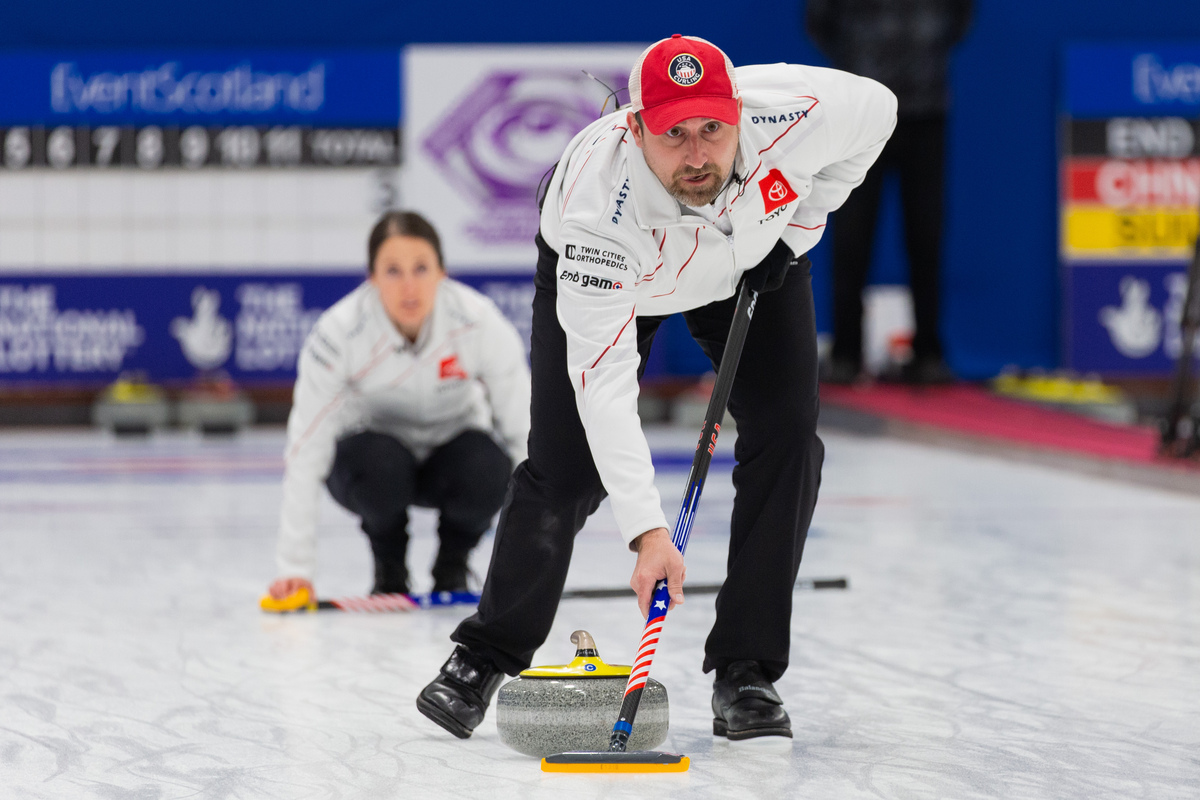 Individual excellence can benefit any team, but it does not necessarily guarantee for a successful duo.

For a prosperous Mixed Doubles partnership, there must be distinct feeling of chemistry and understanding on the ice.

Joe Polo and Tabitha Peterson have racked up an abundance of curling accolades throughout their illustrious careers in the sport.

Both have represented the United States at the Olympic Winter Games, with Polo, 38, claiming a bronze medal at Turin in 2006 before clinching gold at PyeongChang in 2018.

Peterson, 32, represented the women’s team at the Games in PyeongChang, and this month she skipped the States to a bronze medal at the LGT World Women’s Curling Championship in Calgary.

In 2016, Polo and Peterson partnered to form a vastly talented Mixed Doubles pairing that promised to be a threat to the very best duos in the sport – and they certainly didn’t disappoint.

The duo continued to impress, marching into the semi-finals at the World Championship after an undefeated round-robin stage.

A defeat to Russia saw them play a bronze medal game against Scotland, which they edged to claim a memorable win.

Peterson reflected on that moment ahead of this year’s competition and affirmed that they are seeking to go even further this time around, with Olympic qualification the initial goal.

“It’s hard to believe it’s been five years since our bronze in 2016,” Peterson admitted. “We are aiming for a gold medal this time around. And of course, our first goal is to qualify the US for the Olympics.”

Their lofty ambitions are well-founded, as the pair have developed an excellent understanding on the ice – something Polo believes will benefit them, along with their wealth of experience.

“Understanding your partner’s strengths, having personalities that mesh well together and being able to have fun [is important],” Polo explained.

“Just having the experience of going deep into championships is important. It makes things easier for our team because we are learning as we go.

Peterson pointed out the added responsibility that comes with a Mixed Doubles event, and the need for clear communication.

“Mixed Doubles is a very fast paced game and with only two players, you have to do a lot of jobs on the ice,” Peterson added. “Making sure you take the time to communicate to your partner what you are seeing in the ice [is important] as well.”

With both Polo and Peterson having enjoyed success in different teams, implementing differing tactics and styles, the pair must ensure they are harmonious when it comes to playing in a Mixed Doubles event.

Despite the potential clashes over contrasting ideas, Polo assured that they have been able to amalgamate their curling expertise successfully thus far.

“I wouldn’t say [we’ve had] disagreements but different teams have different philosophy’s of how they want to go about things,” he pointed out.

Peterson highlighted how their differing experiences can be of benefit to them as a duo, particularly in terms of their tactical approach on the ice.

“I think playing a lot on our respective men’s and women’s teams only helps us in Mixed Doubles,” she stated. “We get a lot of reps in and another perspective on the game.

“I think the men’s game can be very different from the women’s game, so it is nice to have Joe’s perspective in terms of shot selection.

“He sees a lot of triples and quad take outs and I think ‘let’s just draw’. So, we balance each other out in that way.”

The 2016 World Mixed Doubles Championship was a massive learning curve for the pairing, and Polo is keen for them to use that experience to improve this year, whilst also replicating the aspects of their performances that earned them a bronze medal.

“In 2016 we were able to pick up on draw weight and how the ice was moving relatively early in the week, so we felt comfortable out there,” Polo recalled.

“We have both been to an Olympics since then as well as a couple of World Championships so I don’t think the world stage is scaring us.

“The doubles format for us in 2016 was fairly new and we feel like we are veterans now. We definitely have a better understanding of what we want to do on the ice.”

Polo and Peterson are determined to seal Olympic qualification for the United States, as they are keen to continue their foray into Mixed Doubles on the world stage.

Gold at the World Championship would see them achieve that goal in style and ensure that this Mixed Doubles partnership will feature heavily in the next chapters of two glistening curling careers.

“I think our ambition is to compete at the Olympics,” Polo revealed.  If we have the chance to compete for a World Championship, we would love to do that as well.”