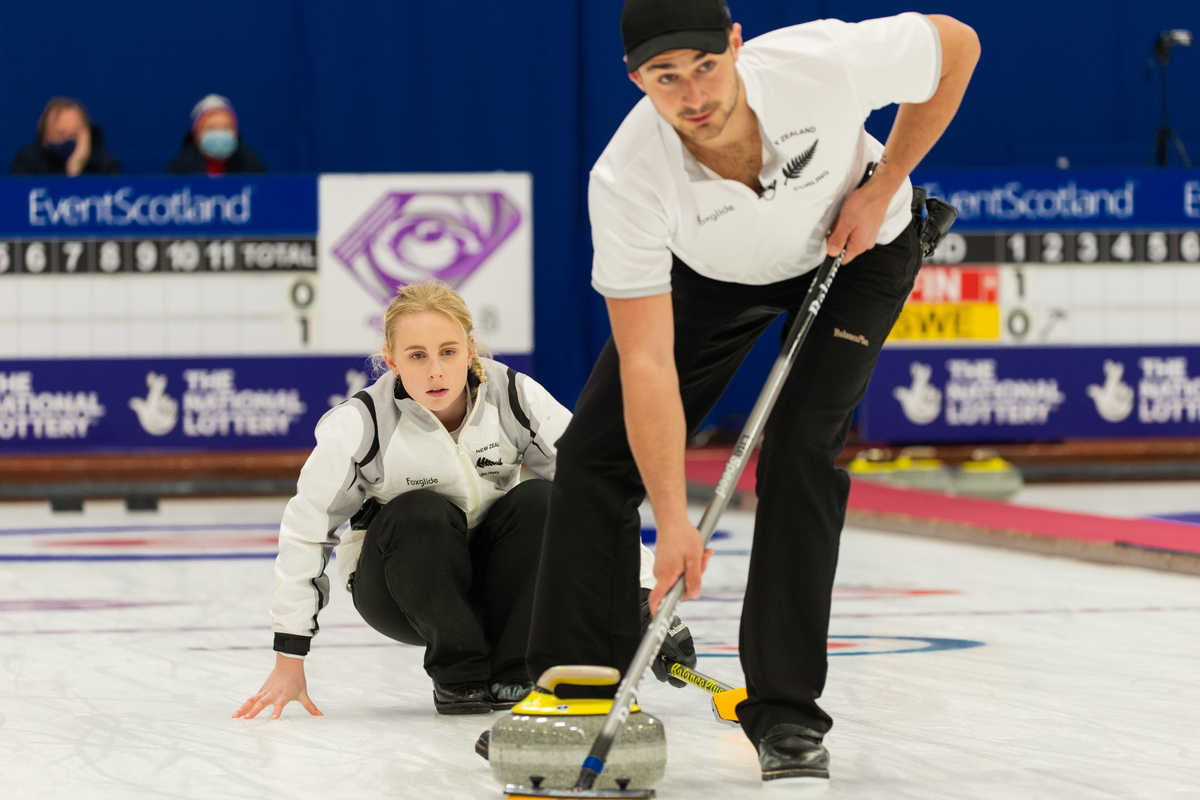 The COVID-19 pandemic has touched every individual across the globe in some way or another and has had a major effect on the World Curling calendar.

Events have been held in bio-secure bubbles, ensuring the safety of athletes, officials, broadcasters and coaching staff.

Most curlers heading to the World Mixed Doubles Championship in Aberdeen have either experienced bubble life already at the Men’s and Women’s World Championships in Calgary or have faced major COVID-19 restrictions in their countries of residence.

Courtney Smith and Anton Hood – the duo representing New Zealand this week – are somewhat the exception to the rule. The Kiwi nation is one of the world’s leaders in tackling the pandemic, almost eradicating community transmission of the virus on its shores.

The 21-year-old pair have lived with limited restriction on their lives. Courtney has spent the entire pandemic either in Dunedin where she studies or in her hometown of Naseby on New Zealand’s South Island, while Anton has been working overseas in Brisbane, Australia as a builder.

“It’s been over a year since I’ve been in restrictions like this when New Zealand originally went into level four lockdown,” explained Courtney from the bubble in Aberdeen.

“This was something I thought could be quite a challenge to adjust to personally.

“We did some work with a Mental Skills Coach (Performance Psychology), Carol Goodlass which was really beneficial.

“I think the key for me was making sure we have plenty of things to do in order to keep busy.”

Courtney is a nursing student and has witnessed the consequences of the pandemic on her fellow healthcare workers.

She has also committed to a COVID-19 vaccinator role on her return from the World Championship.

“I have seen the impact that COVID had on healthcare professionals in New Zealand,” admitted Courtney.

“Many healthcare workers are just burnt out, yet we are so lucky in New Zealand as we currently have no community cases.

“My heart really goes out to health professionals who are battling overwhelming numbers of COVID cases who are having to watch patients die. The impact that has on a person is huge.”

Over 30 hours to Aberdeen

With the success New Zealand has had combating the global pandemic, leaving the sheltered shores of the Island nation was always likely to bring doubts for the Kiwi pair, but they were quick to praise the protocols enforced by the World Curling Federation.

“This is the first time I have left New Zealand since the pandemic began,” Courtney revealed. “I live in Dunedin which is located in the South Island of New Zealand, which hasn’t had an active COVID case for around a year.

“We felt we would be safe in the bubble the World Curling Federation have created here in Aberdeen. I was actually very excited to travel and curl again so it definitely outweighed the risk of COVID for me.”

“I have been working overseas in Brisbane, Australia prior to this event so I personally wasn’t too worried about leaving to come over here,” added Anton.

Despite the trepidation of travelling the globe in these uncertain times, the pair are looking forward to taking on the world’s best pairings in Scotland.

“For me, it’s about trying to play our best game and what happens after that happens.

“I didn’t really realise how excited I was about competing until the airline almost didn’t let us get on our flight from Auckland,” joked Courtney.

“This is my first World Championship and I’m really excited to step up and further challenge myself.”

The pair have only recently come together as a team, but they are confident their individual skills will allow them to succeed as a unit.

“Anton and I know each other pretty well which puts in a good position to be able to support one another throughout this competition.

“We have trained well and can both throw a rock pretty well at times too. We have both had previous skipping experience in fours which I’m sure will be of some use this tournament.”