Playing back-to-back World Championships: An ‘honour’ that ‘never gets old’ 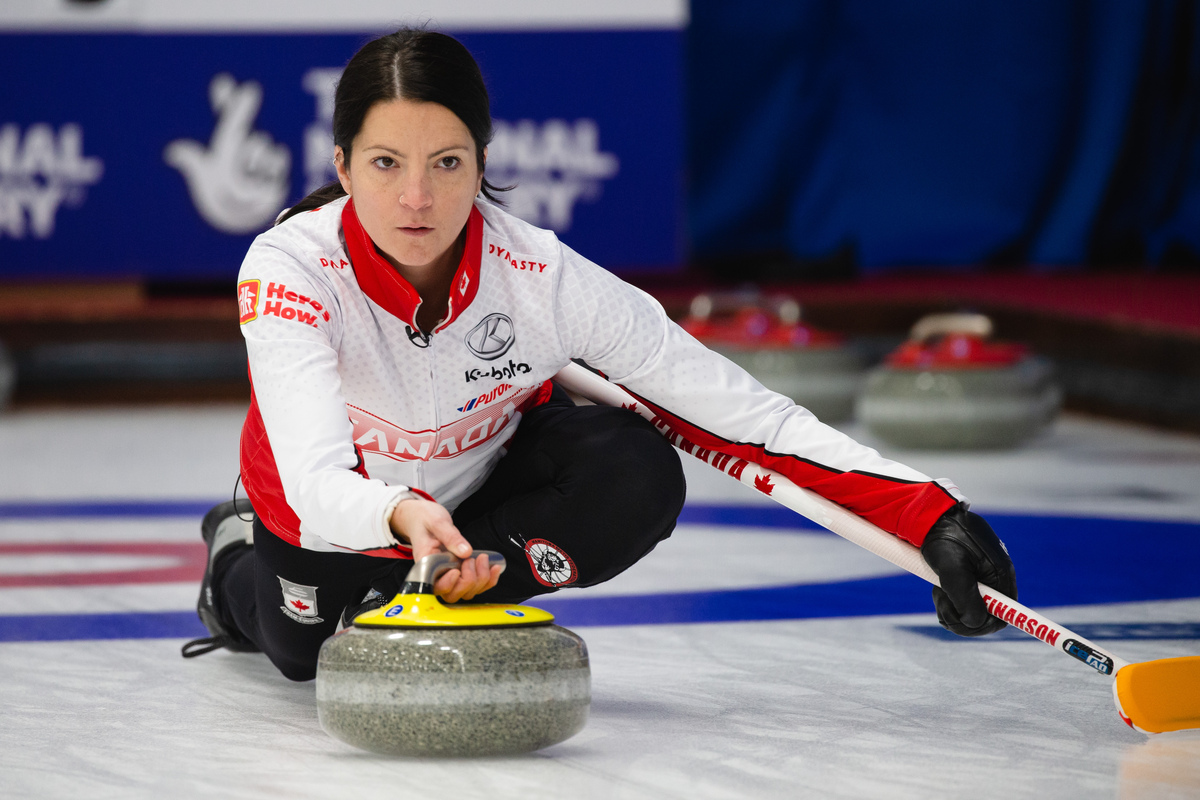 When Kerri Einarson and Oskar Eriksson take to the ice for the Mixed Doubles, they will be competing in their second World Championship in a matter of weeks.

Einarson’s women’s campaign with Canada ended just over seven days prior to the start of the Mixed Doubles event, while Eriksson helped Sweden’s men’s team to a gold medal less than a month before that.

But despite the challenge of travelling from one bio-secure bubble in Calgary to another in Aberdeen, and competing in consecutive World Championships, both athletes spoke of their delight to get back to playing at the pinnacle of the sport.

Einarson’s journey with Canada at the World Women’s Championship ended with an 8-3 defeat to Sweden in the play-offs.

The 33-year-old skipped the team to seven wins in the round robin stage, and now joins up with Brad Gushue to form Canada’s Mixed Doubles duo.

“It’s an absolute honour to be able to wear the maple leaf for a second time in a month,” she asserted. “Not many people get this opportunity.”

Einarson admitted that life within the bubble has been difficult in the sense that it kept her away from her family, but expressed her gratitude for the chance to curl at an elite level despite a global pandemic.

“The bubble life has been challenging, having to be away from our families for such a long period of time isn’t easy,” she explained.” But I’m also grateful for the opportunity to be able to curl in these unforeseen times.”

She maintained that despite the quick turnaround, she is ready and raring to go ahead of the Mixed Doubles – both mentally and physically – particularly after exiting the women’s tournament at the play-off stage.

“It’s pretty exciting to play in two World Championships in a month,” she said. “I’m feeling great physically and getting some rest before I start curling again.

“Mentally I’m doing good but I’m for sure missing my family and friends back home.

“After losing out of the Women’s Worlds, it’s for sure motivated me to get back out and chase my dreams. “

Einarson went on to highlight how the build-up to a Mixed Doubles event can be challenging given the little time duos have to train together, but revealed that she is eager to play at more of the events in the future.

“Preparation for Mixed Doubles is different, we don’t get the opportunity to practice together as our main focus is on our four person teams,” she explained.

“I can for sure see myself playing more Mixed Doubles, I’ve really enjoyed the game. It’s a faster pace game and it’s been exciting seeing so many different shots and angles.”

Einarson went on to hail the influence of her Mixed Doubles partner Gushue, who at 40-years-old has a wealth of curling experience after racking up a plethora of titles over his illustrious career.

“Brad’s been a great mixed doubles partner,” she stated. “He’s very smart, also an unbelievable shot maker and sees shots sometimes I don’t. I think we’ve partnered well together and have both been enjoying the game.”

Playing at third in the men’s event in April, Eriksson helped Sweden to yet another World Championship gold medal.

Victory over Scotland in the final saw Sweden claim a historic third consecutive World Championship title – and Eriksson has been part of the team on each occasion.

And after stacking up masses of medals with his compatriots prior to their incredible trio of titles, there is little that the 29-year-old hasn’t won in international curling.

But ahead of this year’s Mixed Doubles – an event Eriksson won alongside Anna Hasselborg in 2019 – he has rejected the idea that his motivation to succeed could be dwindling.

“Winning these kind of tournaments never gets old,” he affirmed. “When they do I think it’s time to hang up the shoes.”

“I think winning motivates me to win more. It’s tough to get this feeling from something else.

“Sometimes it’s easy to think that you don’t care as much, but right after I have lost or got knocked out of a tournament it’s something I don’t want at all.”

Much like Einarson, Eriksson is grateful to simply be curling again given the abnormality that the coronavirus pandemic has brought on.

“To be honest living and playing in a bubble hasn’t been too big of a difference from what we are used to at a championship,” he explained.

“Of course, we would prefer the freedom to go wherever we want, but we are super happy we can play during this pandemic.”

Eriksson also has a similar attitude to his Canadian counterpart when it comes to playing back-to-back World Championships – he simply can’t wait to get back out on the ice.

“It feels good to play another championship so soon after playing in the Calgary bubble,” he said. “Now I know my form is good and my mind is on curling.

“You know, this is what we as a team and individuals practice and prepare for. To compete a lot and always be as good as possible.

“It’s not a big difference in preparations for me. It’s all about making shots and score more points than the opponents.”

23-year-old Almida de Val will take the place of Hasselborg as Eriksson’s partner for this year’s Mixed Doubles.

The decorated Hasselborg, who is skip of Sweden’s women’s team, leaves de Val with huge shoes to fill, but Eriksson has no doubt she will make an impression.

“I think Almida is a great curler and she sees the game very well,” he added. “This makes it easier for me as well. Because Mixed Doubles is so fast so both players can’t be in the house all the time for example.

“You got to be able to trust each other and I feel like we do that. We have only played a couple of tournaments together but it feels very natural to play together with Almida.”