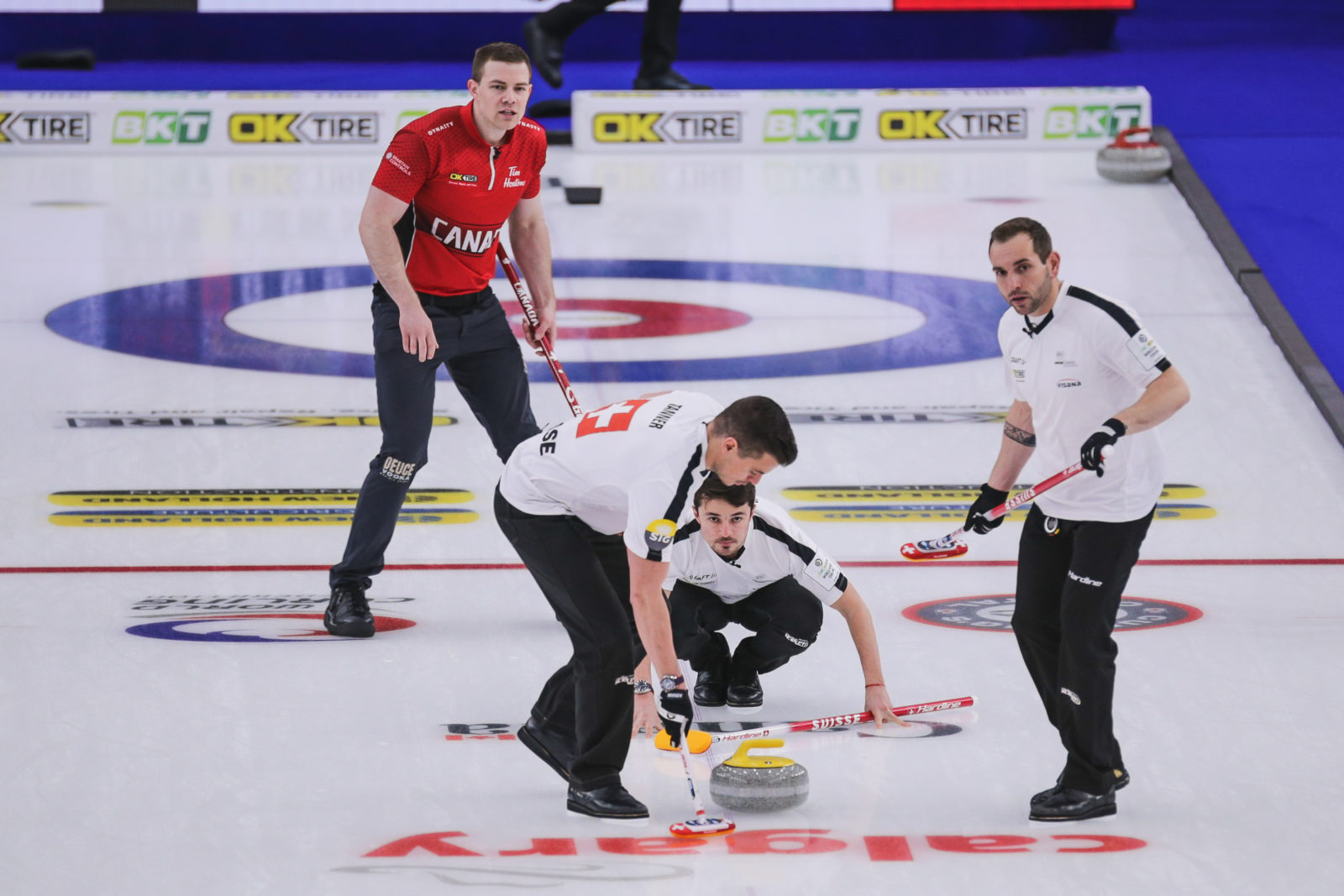 After a tight battle, the two teams were tied 4-4 after ten ends, forcing an extra end. Canada’s skip, Brendan Bottcher, faced two Swiss counters on the covered on button, but came up light with his final draw, giving Switzerland a steal of two and a 6-4 win. With this win, Switzerland join Norway at the top of the standings with four wins and no losses.

“We were a lot better than them,” joked Swiss skip Benoit Schwarz before adding, “No, that’s not true. It was a very good game. They’re a super strong team… we’re extremely happy, we’re going to enjoy this for a bit.”

The Swedes were also in action in this session, against RCF. This game also went to an extra end after RCF scored two in the tenth end to tie the game. In the eleventh end, Swedish skip Niklas Edin made an open hit to score one point, winning  8-7.

“The advantage [of having close games early on] is that you start to feel how the ice gets toward the end of the game. You get a good feel for that. It’s good to have that before the later games of the tournament, to know how much it slows down and how much it curls, because it’s definitely made some difference,” said Swedish second Rasmus Wranaa.

Still looking for a win

Italy faced Germany in this session. Although the Germans took the early lead with a single score in the second end, Italy responded with a run of three scoring ends to go into the break ahead by 7-1. The teams swapped scores of two points in the sixth and seventh ends, when Germany conceded the game, with Italy winning 9-3.

“I think we deserved the win today. We’re happy about it, it’s a big day for us. First win on the board for us today, we need another one,” said Italian skip Joel Retornaz.

United States faced Japan in this session. With the Americans leading by 7-3, in the eighth end Japan’s skip Yuta Matsumura played a difficult cross-house raise double take-out to score two and reduce the United States’ lead to 7-5. But, the Americans lead by 10-5 after the ninth end when Japan then conceded, a third loss for Japan in as many games.

“Finally, these last couple games are really when I’m getting comfortable out there on the ice. When you get comfortable throwing the rock from a line and weight standpoint you feel like you can make anything. I think I’ve gotten into that spot right now,” said United States skip John Shuster.