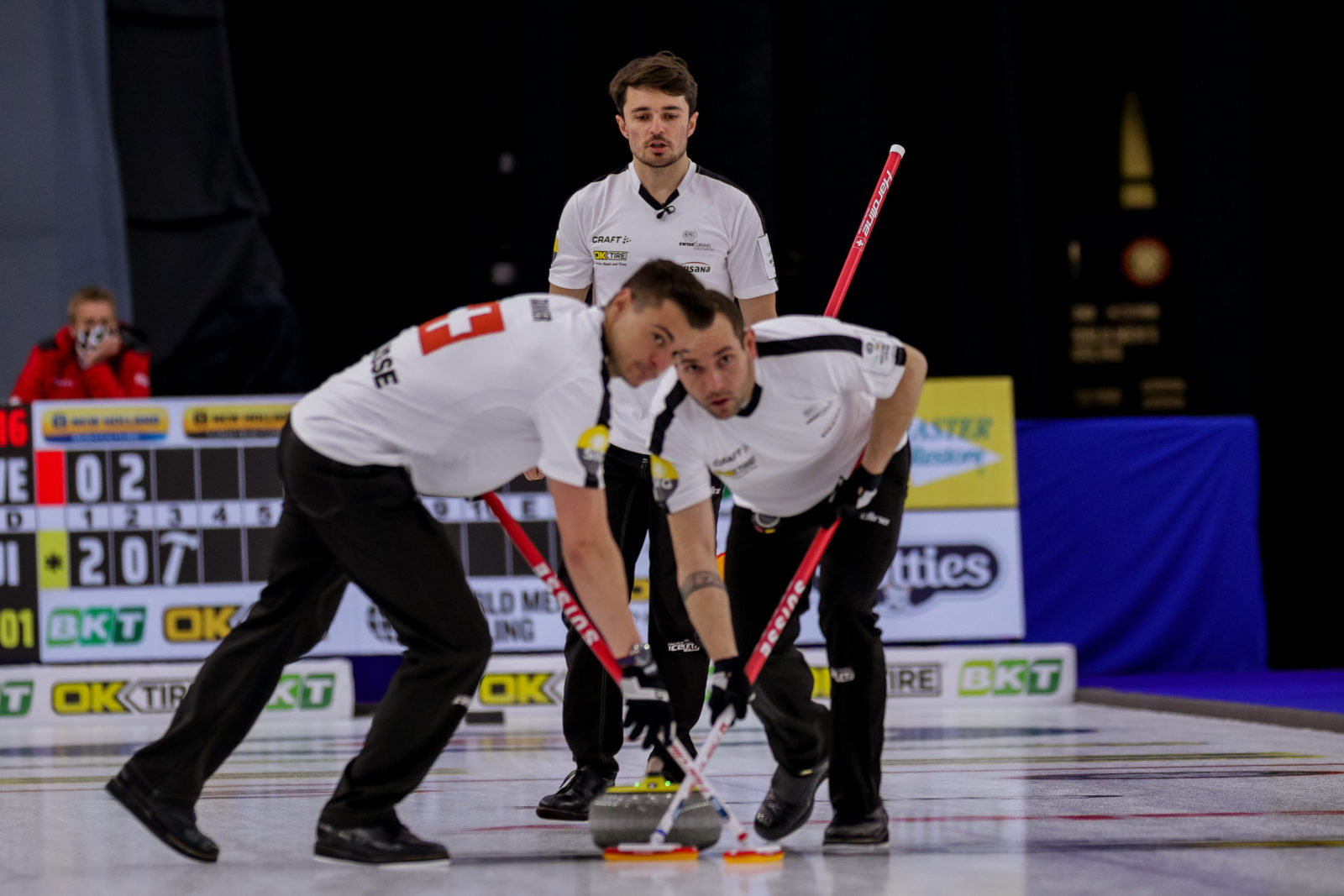 During Friday afternoon’s second round-robin session of the BKT Tires & OK Tire World Men’s Curling Championship 2021, being staged in a COVID-19 secure bubble in Calgary’s WinSport Arena in Canada, Switzerland notched their first win of the tournament, with an 8-7 win over Sweden.

Following the cancellation of the 2020 event, 2019 title-holders, Sweden, opened their defence against Switzerland in this session. Switzerland had the better start, leading by 4-2 after five ends. But, in the sixth end, Sweden’s skip Niklas Edin threaded his last stone through a busy house to draw into position and score one point, reducing the Swiss lead to 4-3.

In the eighth end, Edin played a well-judged tap-back for two points to level the score-line at 5-5. Switzerland then took a two-shot lead again in the ninth end, for 7-5. In the tenth Edin executed a tap-back to score the two needed to level the score at 7-7, forcing an extra end. In the extra end, Swiss fourth player Benoit Schwarz played a hit-and-stay to score one point and give his team an opening 8-7 victory.

“It’s a big, big confidence booster. World champions, multiple world champions, probably the best team in the world. You don’t beat them every day in the big championships,” said Swiss skip Peter De Cruz. “It’s been a long time since we beat them in a major tournament and hopefully we can keep it going.”

The RCF stand unbeaten at the top of the rankings, thanks to their second win so far, by 9-3 over Korea. Under skip Sergey Glukhov, the RCF opened with a score of two, following that up with a single steal in the second end which led them to their win.

“We’ll try to keep concentration for the next games and try to keep doing good things like today,” said Glukhov on the win.

Germany and Japan faced each other in this session as they both opened their campaigns. Japan could not have wished for a better start after scoring four in the first end. Japan maintained control of the game and won 8-5.

Also opening their campaigns in this session were China and the Olympic champions from the United States. After two blanked ends, United States opened the scoring with three points in the third then and a  single steal in the fifth end.

After this, China fought back, scoring one point in the sixth and stealing singles in both the seventh and eighth ends, when United States skip John Shuster jammed an attempted take-out at the back of the house. This reduced the United States lead to one point, at 4-3. United States then moved onto a 5-3 lead in the ninth end, when Shuster produced a triple take-out to score one. In the tenth end, China pressured the Americans, loading up the house and creating a possible opportunity to win.

“It’s never fun to feel like you’re guarding for your life in the last end. Especially when they have three in there and we were looking at losing, not even going into extras. It was a hard-fought battle,” said American second Matt Hamilton. In the end, Zou narrowly missed an angle raise attempt- scoring just one point to lose the game by 4-5.