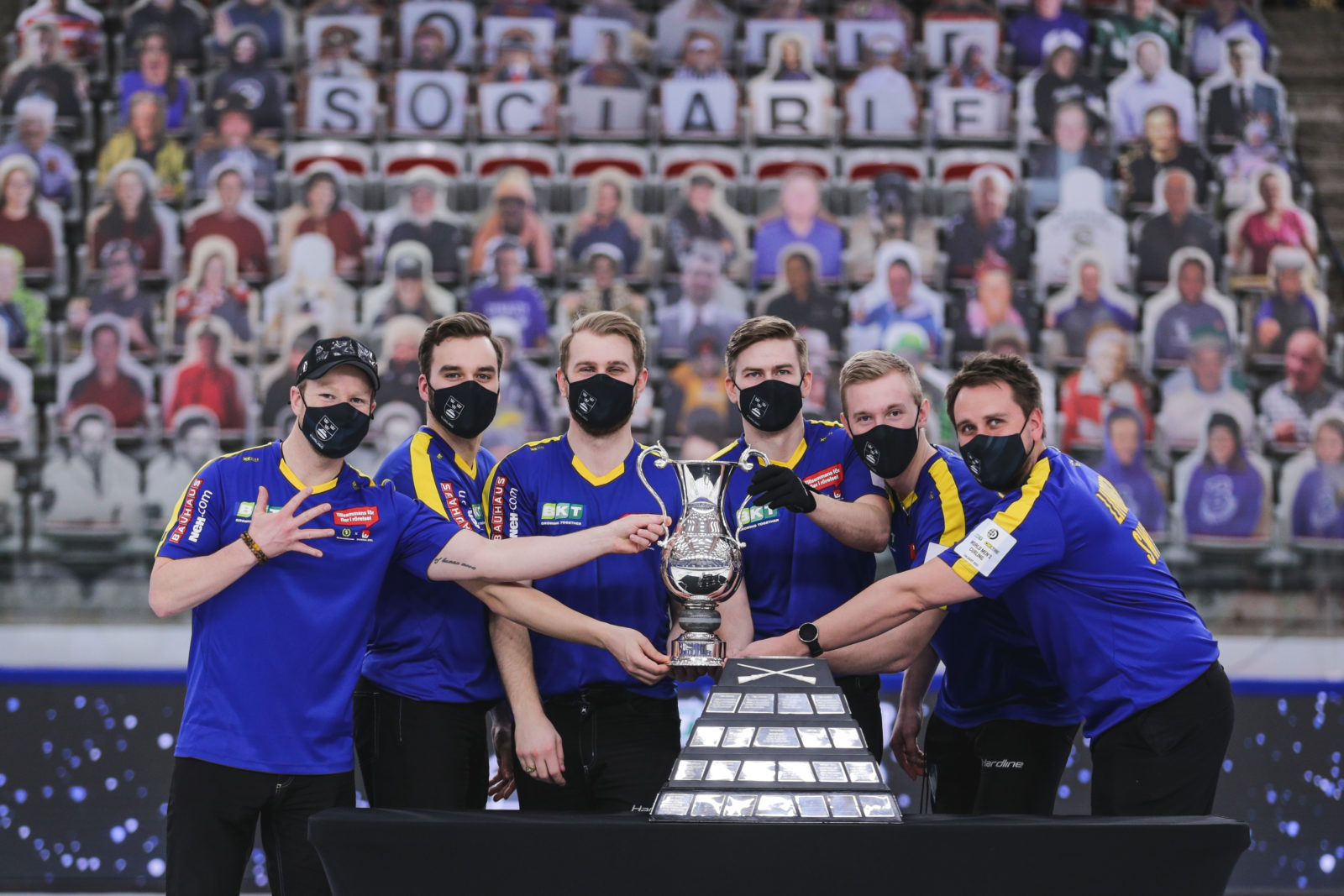 Two-time defending world champions Sweden added a third consecutive world title to their name, and fifth overall title for skip Niklas Edin, with a 10-5 win over Scotland at the BKT Tires & OK Tire World Men’s Curling Championship 2021 presented by New Holland at The WinSport Arena at Canada Olympic Park in Calgary. In the bronze medal match, Switzerland earned a 6-5 victory over RCF.

Sweden — skipped by Niklas Edin with third Oskar Eriksson, second Rasmus Wranaa, lead Christoffer Sundgren and supported by alternate Daniel Magnusson and coach Fredrik Lindberg — got on the scoreboard first. They earned one point in the first end after Edin executed a tight draw to the button against Scottish counters.

In the second end, Scotland — skipped by Bruce Mouat with third Grant Hardie, second Bobby Lammie, lead Hammy McMillan and supported by alternate Ross Whyte and coach Alan Hannah — made use of the last stone advantage to take two points with an open hit. Sweden then took two points of their own in the third end with an open draw to the four foot, bringing the score to 3-2.

Scotland responded with one point in the fourth end, despite giving up a chance to earn two points after Mouat was heavy on his final draw. This tied the game 3-3.

In the fifth end, Sweden took one point with an open draw to the button. After an open hit in the sixth end, Scotland earned another point, again tying the game, this time at 4-4.

In the seventh end, Edin missed a chance at a double take out, throwing his first stone through the house. This gave Scotland a scoring chance for three, but Mouat was light on his final stone. Edin, with last stone advantage, had an open draw to the button for one point, earning a 5-4 lead.

“We had to really focus; every end was super important,” said Edin.

With Sweden in position to earn two points in the eighth end, Mouat executed an open draw to the button to take one, tying the score at 5-5.

The double for five

In the ninth end, Sweden broke through. With the final skip’s shot, Sweden had four stones in the house, with just one counting. Scotland was in second scoring position at the back of the four foot.

With Mouat’s final stone, the Scots drew into the house, coming up just short of their goal and sitting at the top of the eight foot — setting up a natural double take-out for Sweden.

“I didn’t get mine into the best spot so it gave him that double,” said Mouat. “That’s curtain’s in any game.”

“Once we got to that situation, that’s the only call you can make,” said Edin.

In signature Niklas Edin fashion, he executed a masterful double take-out to earn five points and with that, the World Men’s Curling Championship gold medal.

“That kind of double, since you’re running the opposition’s rock into another one, you can’t stuff it there which is really easy to do,” Edin said. “I had to aim for that high-side spot, and then when I made it, it was just pure happiness. I’m really happy this one worked out.”

Edin is the only skip to ever win five total World Men’s Curling Championship titles, while Sweden is the only country other than Canada to win three consecutive gold medals.

“It was probably the toughest field ever at a World Championship,” said Edin, adding, “We were in really good form after winning the Worlds two years ago, and we were super pumped up and eager to play in the Worlds last year and when that got shut down. We didn’t really know if we were still that good [this year]. We are super confident normally going into events like this, but we couldn’t really know if our form and will to win was still the same, so I think winning this one feels unreal.”

RCF hit back with one point in the second end, after an open draw to the house with Glukhov’s last stone.

After a blank third end, Switzerland widened their lead by one point after taking out an RCF stone and staying in the house with their last shot. That brought the score to 3-1.

With the last stone advantage, RCF then took two points after an open hit by Glukhov. That meant the teams were tied 3-3 heading into the fifth end break.

In the sixth end, Switzerland drew to the button with vice-skip Schwarz’s last stone to count one, pulling ahead to a 4-3 lead. But, RCF quickly tied the score with a take-out in the seventh end.

In the eighth end, Switzerland’s Schwarz made a masterful tap back with his first stone and, after a missed double take out by Glukhov, had a chance to take two. But, on his second stone, Schwarz was heavy and tapped the stone that was formerly counting out of scoring position, dashing the Swiss hopes of two points and leaving them with one, for a 5-4 lead.

RCF attempted a raise on Glukhov’s last stone in the ninth end to take two points, but missed. They earned just one point, heading into the tenth end tied 5-5 but without last stone advantage.

In the final end, Switzerland had an open draw to the button on their last stone to score one point and win the bronze medal.

“It’s a big relief after such a long, long event,” said de Cruz. “It was a complicated event and a complicated road to come here. We’re a bit disappointed we weren’t able to give Nik and the team a better game in the semis but RCF pushed us to the end.”