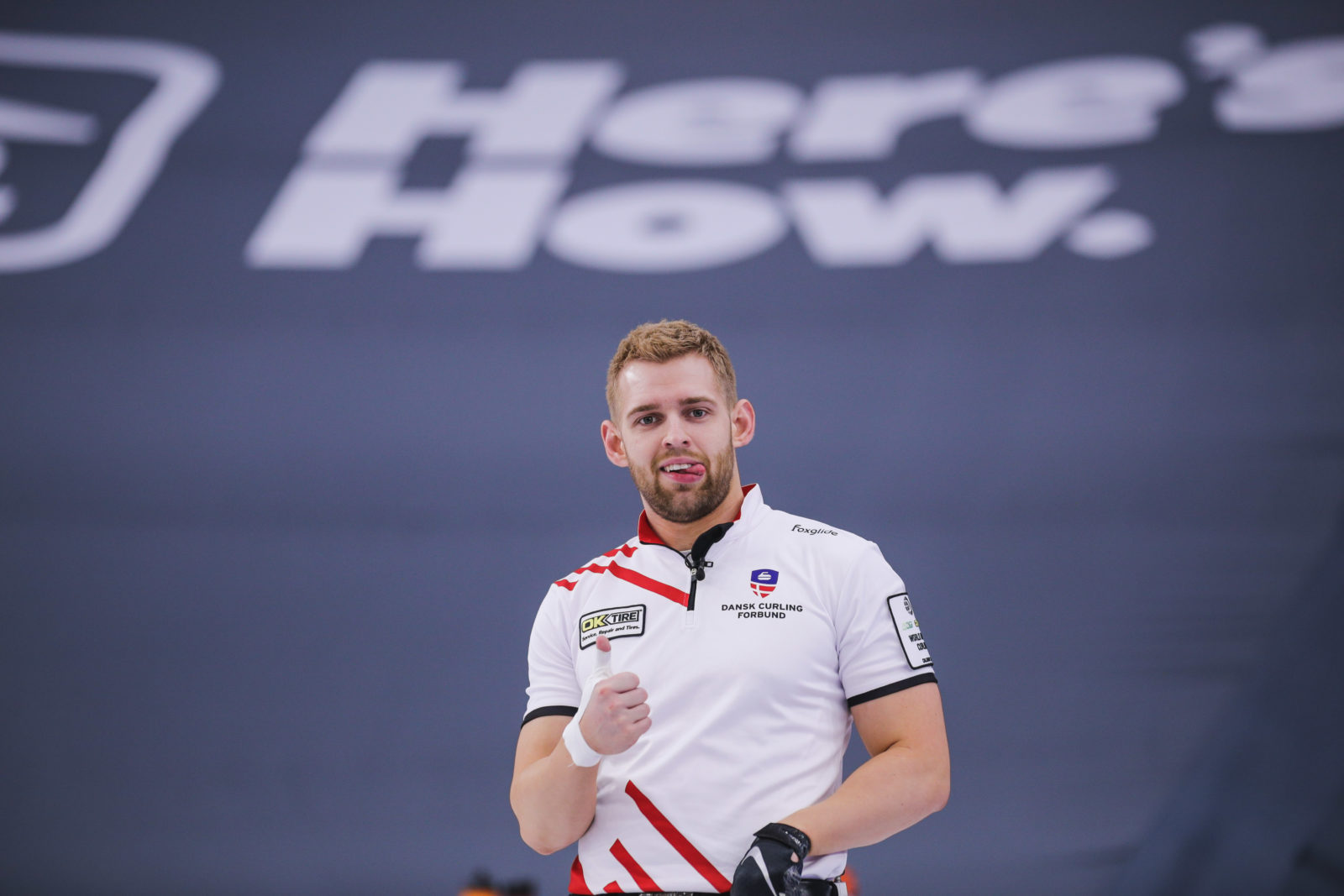 If you listen closely to the on-ice action at the BKT Tires & OK Tire World Men’s Curling Championship 2021 you might just hear some beatboxing rising between all of the shouting. That’s thanks to Danish skip Mads Noergaard, who once ranked fifth in Denmark for beatboxing. Now, it’s a hidden talent and subconscious stress relief that has earned Noergaard a reputation as the beatboxing skip.

“It makes me relaxed without me noticing,” said Noergaard. “I think it’s me telling myself, ‘you can be calm.’ I wouldn’t do it if I wasn’t calm.”

His unique relaxation technique came about after years as a drummer, a passion he pursued before he started curling. As his curling career grew he knew he’d have to sacrifice his musical ambitions. But, after watching an online video of a beatboxer he decided he’d try developing the new skill in his spare time.

“Drummers often speak the beat as they drum, so it was a natural progression,” he said. He soon fell in love with the art of making new sounds, committing to hours of practice to train his voice. “You’re just trying to think of something new all the time and combine new sounds. It’s a lot of work to come up with new sounds all the time,” he said.

After six years of practicing, he found a community of Danish beatboxers who encouraged him to try competitions, busking and performing at small local gigs. That’s when he began competing, making three appearances at Danish nationals and placing as high as fifth in the nation.

He eventually retired from beatboxing competitively to continue focusing on curling. Despite that, the music lives on as the constant soundtrack to his life.

“To some people it’s not music, but it is to me,” he said. The music is so often subconsciously on his mind that, when playing at the club level, he’ll often catch himself beatboxing when he’s sliding or after sweeping.

My parents growing up were like ‘Can you just shut up? You’re doing it all the time,’ said Noergaard. He admitted competitors are sometimes put off when he beatboxes on the ice. “I probably won’t do it as a skip, to not annoy the other skips,” he said.

But, when it’s time to get together off the ice, his hidden talent turns him into the life of the party. “I used to jam with a few friends I’d curl with. I had one friend who’d rap,” he said.

His love for music is also a comforting sign to his team. “For me, when he does it, then I know he’s in a good mood. He doesn’t need any help or to be talked to when he’s down. He just gets himself back there,” said alternate Oliver Rosenkrands. “We know something’s wrong if he doesn’t do it during a game.”

Rosenkrands admits the team even joins Noergaard occasionally, noting he learned to make a raven sound to compliment Noergaard’s music. Their coach also beatboxes. He first attempted the musical art form before coaching Noergaard, and the two bonded over their shared love for beatboxing when they met.

“It’s part of having him on the team,” said Rosenkrands. “It’s his thing to do that. I have quirks, too. But, he’s the sound guy.”

For Noergaard, having a way to express his creativity actually helps his mindset as an athlete.

“It’s good to get your focus off the curling sometimes because it can get too much,” he said. “I think you see sometimes at the big events that teams have been practicing too much and they run out of energy or love for the sport. Your other pursuit doesn’t have to be close to what you already do. It can be totally different. A creative outlet.”