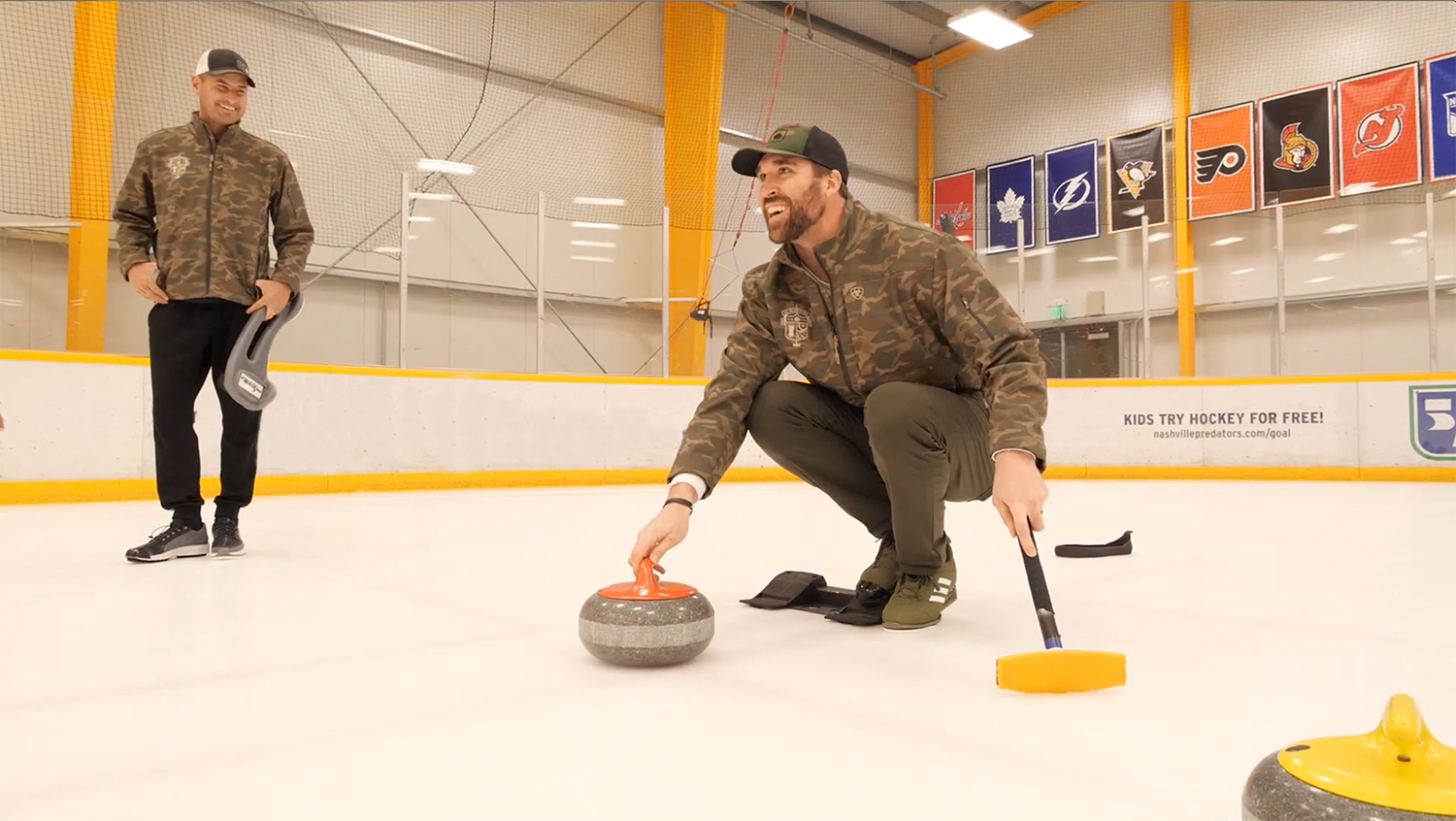 Jared Allen sits in the hack during practice

What do you get when you cross a group of former National Football League (NFL) players, a wild bet and a sheet of curling ice? Jared Allen, who played 12 seasons in the NFL, is hoping the answer is a trip to the Olympic Winter Games.

It might sound far-fetched but Allen, along with teammate Marc Bulger, formerly of the St. Louis Rams, isn’t kidding around. After a friend jokingly challenged him to make it to the Olympics following his retirement from professional football, Allen threw himself wholeheartedly into learning how to curl. What’s more — he hasn’t quit. It’s been two years of starting a new sport from scratch and he still hasn’t looked back.

“We’ve always had a rule in whatever we’ve done — you have to swallow your ego,” Allen said. This was a motto that was certainly put to test in their early days on the ice. “We went to tournament after tournament getting just waxed,” said Allen of the many losses they endured while trying to learn how to curl competitively.

Yet the team didn’t let the beginning losses wear them down. They’ve proven their commitment to the sport, and the results are showing.

“As we learn, we’re finding it’s the nuances of curling that make the biggest difference,” said Allen. He said the game isn’t just one of inches, but of centimetres.

“Our misses went from being, we call a guard and it’s at the back of the house — five or six feet — now we’re missing by a foot — a half rock here, a quarter rock there.” Allen said.

With their deliveries and sweeping improving, now they’re focusing more on strategy.

“The strategy is the tough part — it’s seeing things three shots ahead,” said Allen, adding, “You might see something three shots ahead and then the other person does something to mess that up so you have to react and make a decision based on what’s available.”

“We’re learning nuances we had no clue about,” said Bulger, referencing how he’s learned to time Allen’s slides so he’ll know immediately how much to sweep.

Bulger, who played quarterback throughout his NFL career, is now playing lead and adjusting to what his shots mean to the overall team strategy.

“Now that I’m learning curling, I’ve realized how important lead is. I feel like I lead them down a bad path when I hog one,” he said.

These learnings and improvements haven’t come without sacrifice. They originally began their quest by bringing on former American Olympian John Benton to coach their progress, often flying to Minnesota to practice on club ice in addition to holding practices several times a week in Nashville on arena ice. Keeping with their commitment to the curling community and their personal progress, Bulger is also in plans to build the first dedicated ice facility in Nashville so they can practice on high quality ice more consistently.

In 2019, after less than 12 months on the ice, Allen made his USA Curling Nationals debut as an alternate for Team Ruohonen. Then, in 2020, a lineup change.

“Physically, we’re athletes. We can pick up anything in a short time. From a technique standpoint, and I’ve always been a technician in anything, I’ll pick that up and I’ll master it. From a strategy standpoint, how do you curb the 30 years of knowledge we’re competing against? Go out and get a skip who has 25, 30 years of knowledge. We went out and got Smitty,” said Allen.

By Smitty he means former Olympian Jason Smith, who joined them as skip. They also added former Olympian Tim Solin, as coach, while keeping another former NFLer, Michael Roos, at second. Together they competed in the Men’s Challenge Round in an attempt to qualify for 2020 USA Curling Nationals. They finished the event with a 1-3 record, not ideal for a group hoping to qualify for the Olympic Games in just over two years.

“We were humbled. We don’t feel like we should have lost. We were having a good year before that.”

Still, the loss hasn’t muted their appetite for curling or their Olympic dreams.

“Even the worst team in the NFL every year says they want to win the Superbowl,” said Allen. “Anyone who steps on the ice at a WCT event should have aspirations of making it to the Olympics, because that’s the pinnacle of the sport. If you fall short, so be it.”

For Allen, his commitment to curling is proof that he’s willing to put in the work to make his dreams a reality. “A lot of people probably have that dream,” he said, “but they’re too afraid to chase it.”