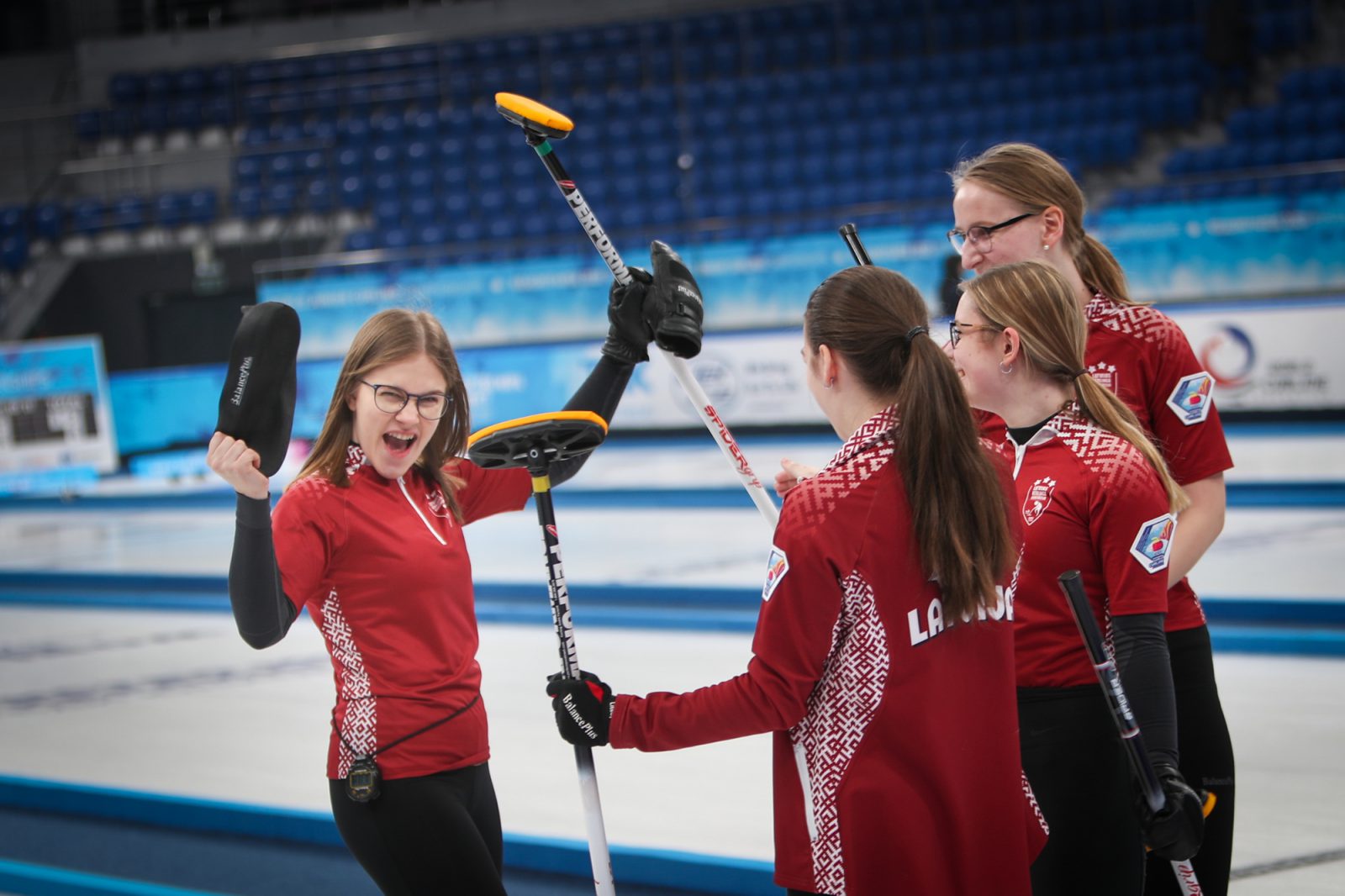 In the first-ever appearance at a world junior championship level by either their men or women, Latvia recorded their first-ever win, beating Norway by 7-6. This historic event took place in Tuesday (18 February) morning’s fifth session of women’s round-robin play at the World Junior Curling Championships 2020 in the Crystal Ice Arena, Krasnoyarsk, Russia.

Sweden also had a first win of the week in this session, beating the defending champions Russia, by 8-3. At the same time, Korea’s 8-3 win over Switzerland kept their unbeaten run going and placed them alone at the top of the table.

Against Norway, Latvia built up an early 4-1 lead after four ends, but a score of two points by Norway in the fifth end, followed up by a single-point steal in the sixth end, drew the Norwegians level at 4-4.

With the score tied at 6-6 after nine ends, Norway had last stone advantage in the tenth end. Latvia left Norway’s Maia Ramsfjell with a difficult take-out attempt for the win. When the Norway stone caught a guard, Latvia took their historic 7-6 victory with a single-point steal.

Afterwards, an excited Latvian skip Evelina Barone said, “We had our ups and downs there, but we came out with the win so we’re happy about that. I was going crazy in my mind when she played her last stone and was thinking ‘well, we did everything that we could, so the pressure is on her, not on us right now’. We didn’t show our best in this game, but it was good enough to win.”

In their game against Russia, Sweden opened with a score of two points in the first end and followed that up with single-point steals in both the second and third ends for an early 4-0 lead.

Try as they did, Russia could not get back on terms after this until, with her stones in a strong position in the ninth end, Sweden’s skip Emma Moberg deliberately threw her last stone through the house for fear of upsetting the situation. She still scored one point from the end and Russia conceded, with the score at 8-3 to the Swedes.

Afterwards, Moberg said, “We played very well in this game and made all the key shots. We have struggled a little bit this week with the line and the weight and some stones, but today it all came good.”

With Denmark beating previously undefeated Japan by 6-3, thanks to scores of two points in the seventh and tenth ends, Korea’s 8-3 win over Switzerland puts the Koreans alone at the top of the table, undefeated after five games.

In the fifth game of the session, Canada beat Hungary, finishing the game in the eighth end with an umpire’s measure for four points and a 12-4 win after Hungary conceded.

Behind unbeaten Korea, three teams — Canada, Denmark and Japan — share second place, on four wins and one loss, with Russia in fifth place. The top six teams from this event qualify directly to next year’s Championships, with Switzerland currently occupying the crucial sixth spot. Meanwhile Hungary are now the only women’s team still looking for their first win.