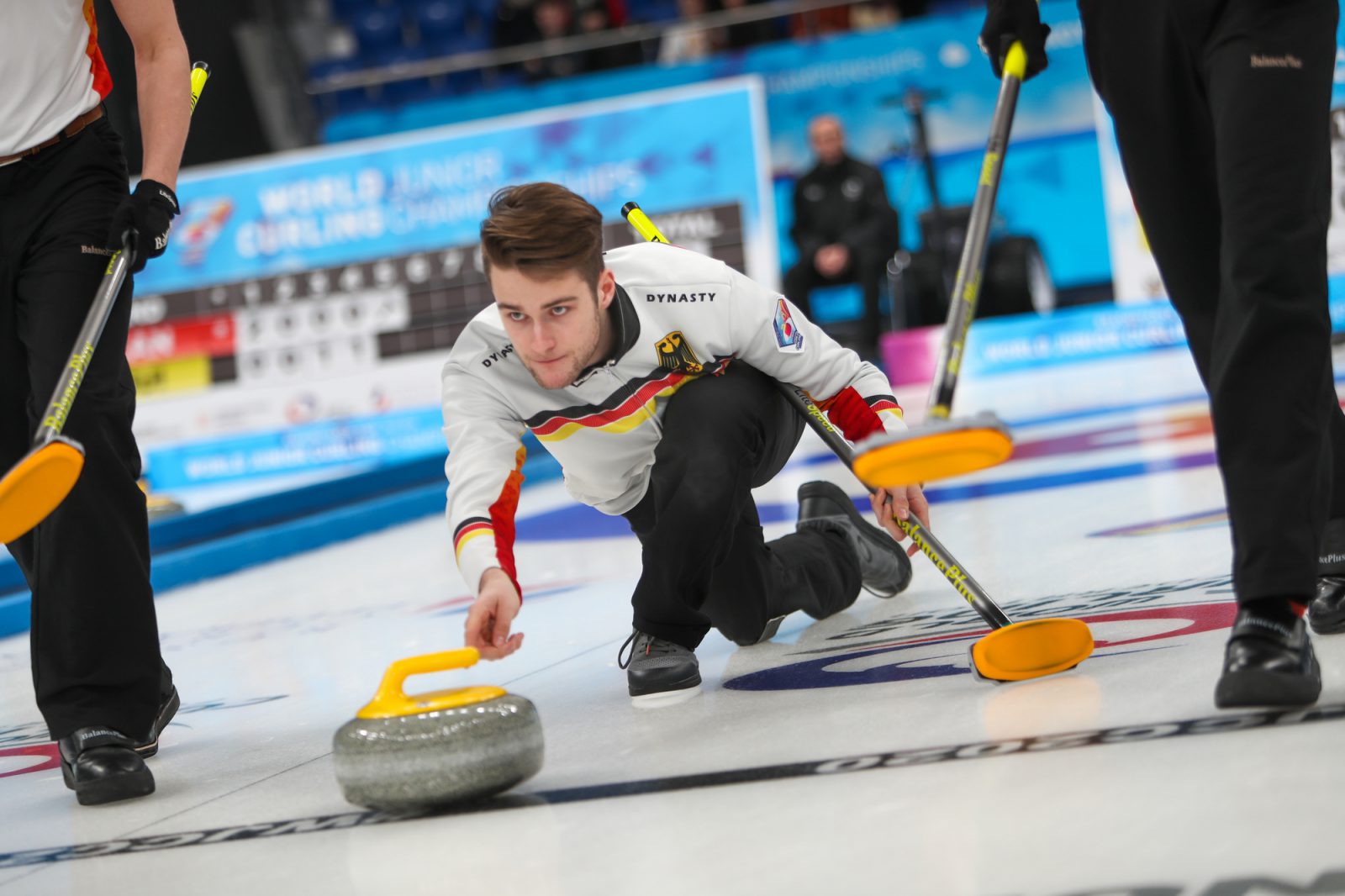 Germany and United States faced each other, tied in shared top spot, when the teams went onto the ice for Sunday (16 February) afternoon’s third session of men’s round-robin play at the World Junior Curling Championships 2020 in the Crystal Ice Arena, Krasnoyarsk, Russia. But an 8-5 win in this top-of-the-table clash saw Germany break out into a clear lead on the rankings.

With the teams tied at 2-2 after three ends, Germany had a single-point steal in the fourth end and followed that up with a steal of two points in the fifth end to take a 5-2 lead into the half-time break.

In the second half of the game, the Germans managed to keep United States at bay before eventually running them out of stones in the tenth end to record their victory.

After the game Germany skip Sixten Totzek said, “It was a hard game. The ice was difficult for us today, really fast and I think that’s why they made two in the first end. But we came back in the third end and in the middle of the game.” He added, “It feels great to be on three wins. To be honest I did not expect that. I thought that maybe we can win two, but three – perfect start!”

Defending champion nation Canada faced Switzerland in this session and they survived a mid-game scare when they gave up single points in three successive ends to go into the break down by 2-3.

Canada pushed ahead again with a score of two points in the sixth end and a single-point steal of their own in the seventh end for a 5-3 lead. They then went onto a 7-5 victory for their second win so far.

Hosts Russia faced Italy in what was a tight game until, with the score tied at 4-4 after eight ends, the Russians carved out single-point steals in the ninth and tenth ends for a 6-4 win.

After the game Russia skip Artem Karetnikov said, “It was complicated in the last end but we’re happy – finally – to come out with the win. We waited for a mistake and we finally got it, so we capitalised on that.”

In their game against Norway, New Zealand had a strong middle section, taking a 3-2 lead with a single point score in the fourth end, then stealing two points in both the fifth and sixth ends to extend their lead to 7-2. A further steal of one point in the ninth end sealed the game, with New Zealand going on to win, by 9-4.

These results mean that Canada, New Zealand, Russia and United States now head up the chasing pack behind Germany, on two wins and one loss each.

In the fifth game of the session, Scotland beat Sweden, by 7-3, to record their first win and leave Norway as the only team still looking for a victory. Scotland now joining Italy, Sweden and Switzerland on one win.

A steal of three points for Scotland in the third end made all the difference in this game and afterwards, their skip James Craik said, “It’s nice to get started on the board and hopefully there’ll be a winning streak to follow. I sure hope that’s our turning point. We knew this was a big game – obviously they all are – but at 0 and 2, we wanted to get on the board, so we’re just happy we could bring that performance today.”