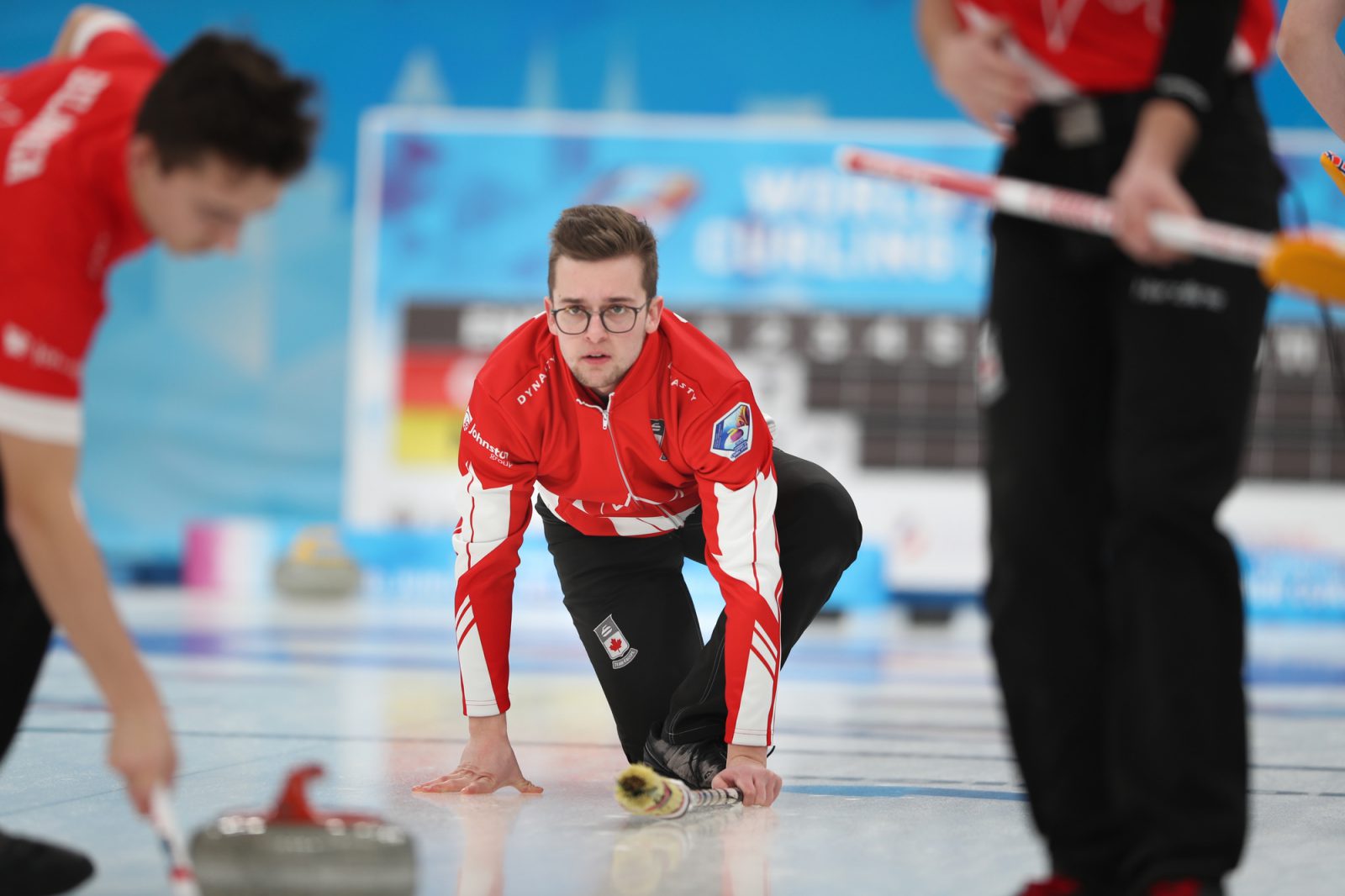 Canada beat Norway, by 9-3, while Germany had a 9-7 extra-end win over Italy in Monday (17 February) evening’s fifth session of men’s round-robin play at the World Junior Curling Championships 2020 in the Crystal ice Arena, Krasnoyarsk, Russia, and these results mean that these two teams share top spot, each on four wins and one loss.

Against Norway, defending champions Canada blanked the first end and then scored three points in the second end.

Although Canada gave up a steal of one point in the fourth end to reduce their lead to 3-2, a further score of three points in the sixth end, for 6-2, re-established their superiority. The Canadians then sealed their 9-3 win with a steal of two points in the ninth end.

Canada lost their opener on Saturday, but since then have posted four wins in a row. After this latest victory, their skip Jacques Gauthier said, “We’ve had a couple of days and games to process our opening loss. We’ve been playing better and better. We had a bit of a speed-bump tonight, we weren’t as sharp as we’d like to be, but every game, we’ve picked it up and I’m pretty happy with our playing. I don’t think I personally caught onto the ice as well as I would have liked to, and we had a little bit of struggles early trying to figure out our rocks. I think we played a lot better after the fifth end.”

Germany were level with Italy at the fifth end break of their game, with the score at 3-3.

The lead then changed hands four times in the second half, and when Italy could only score one point in the tenth end, to tie the game again, at 7-7, the teams played an extra end.  Germany used their last-stone advantage in that extra end, to score two points for the win, 9-7, and a place as joint leaders.

Two other games in this session went to extra ends.

After United States carved out three points in the tenth end of their game against Sweden to level the score at 8-8, Sweden’s skip Daniel Magnusson played a nose-hit with his last stone of the extra end to score the one point needed for a 9-8 win.

The third game to need an extra end was between hosts Russia and Switzerland.

The Swiss were 4-0 up after the first two ends but after that, play swung either way. The game featured a number of hog-line violations at crucial points and eventually Switzerland won with a single-point steal in the extra end when an attempted Russian take-out did not properly remove a Swiss stone.

In the fifth game of the session, Scotland produced their third successive win with an 8-4 victory over New Zealand.

The Scots had single-point steals in each of the fourth and fifth ends to go into the break with a 4-1 lead. Scores of two points in both the eighth and tenth ends completed their win.

Afterwards, Scottish skip James Craik said, “Three wins in a row is a nice streak to have, and hopefully it continues throughout the championships. The morale in the Scotland camp is really high, even after the slow start. We’re building back up, getting into the flow of things and it’s nice to see the results coming in as well.”

After this session, New Zealand, Russia, Scotland and Sweden share third spot, one win behind joint leaders Canada and Germany, with Norway the only win-less team in the men’s event.