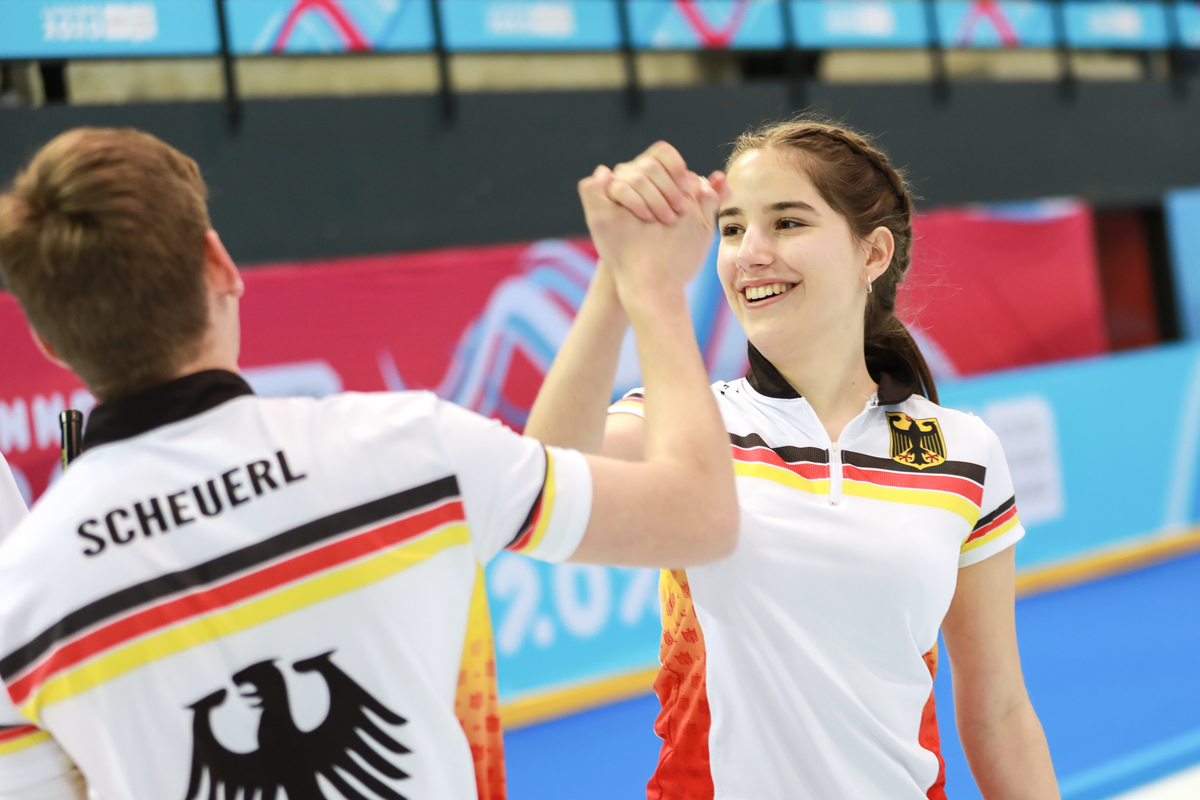 The 15th and final round-robin session of the mixed curling competition at the Youth Olympic Games 2020 saw three games in Group B and one in Group D.

The only group left with a play-off spot up-for-grabs was Group B and three teams – China, Germany and Hungary – had chances to take that. A win for Germany ensured they were the successful team.

The quarter-finals will be played at 10:00 on Wednesday (15 January). The semi-finals will then take place at 14:00 that afternoon. These times are Central European Time (CET) which is one hour ahead of Universal Coordinated Time (UTC). The quarter-final line-up is as follows:

Firstly, Germany took on Hungary. Hungary stole a single point in the first end, while Germany took two points from the second end. In the following two ends, a very precise Germany managed to steal two single points. At the fourth-end break Germany were leading, 4-1.

Hungary came back from the break re-energised and managed to score three points in the fifth end, tying the game at 4-4. In the following two ends, the teams traded two-point scores and went into the eighth end tied at 6-6. At this stage, Germany had the last stone advantage. In the final end, Hungary tried to set up a steal, but their last stone came up short, meaning that Germany didn’t need to throw their last stone. Germany won 8-6.

On another sheet China met Denmark. The Chinese knew that they could qualify for the quarter-finals by winning this game, but relied on Germany losing, which didn’t happen. Denmark stole three points in the first two ends and forced China to a single point in the third. In the next end, China managed to steal a point and narrowed the gap between the teams to a single point. At this stage Denmark were up, 3-2.

In the second half, Denmark put on a strong performance, scoring two points and stealing four points in the fifth and sixth ends, respectively. Denmark led the game 9-3 after seven ends of play when China conceded defeat.

A pleased Denmark skip, Jonathan Vilandt, commented on the game, “It was a great win. We’re going to go to the next tournament with a great feeling so that’s good.”

The hosts, Switzerland, had a perfect record going into their last round-robin game and already had a spot in the play-offs, while their opponent, Brazil, was in search of their first win. Switzerland – playing without their regular skip Jan Iseli – pulled out a strong performance once more, scoring eight points in the first half of the game. This included a big score of five points in the fourth end. The teams went into the break with a 8-1 score on the board. After half-time, Switzerland kept their momentum, stealing two points in the fifth end and forcing Brazil to take a single point in the sixth end. With a 10-2 score after six ends Brazil shook hands. The victory meant that Switzerland ended the round-robin stage with a perfect record of five wins and no losses.

In the only Group D game, Italy played Czech Republic. Italy went into the game with an unbeaten record knowing that they had already qualified for the quarter-finals, along with Japan from this group.