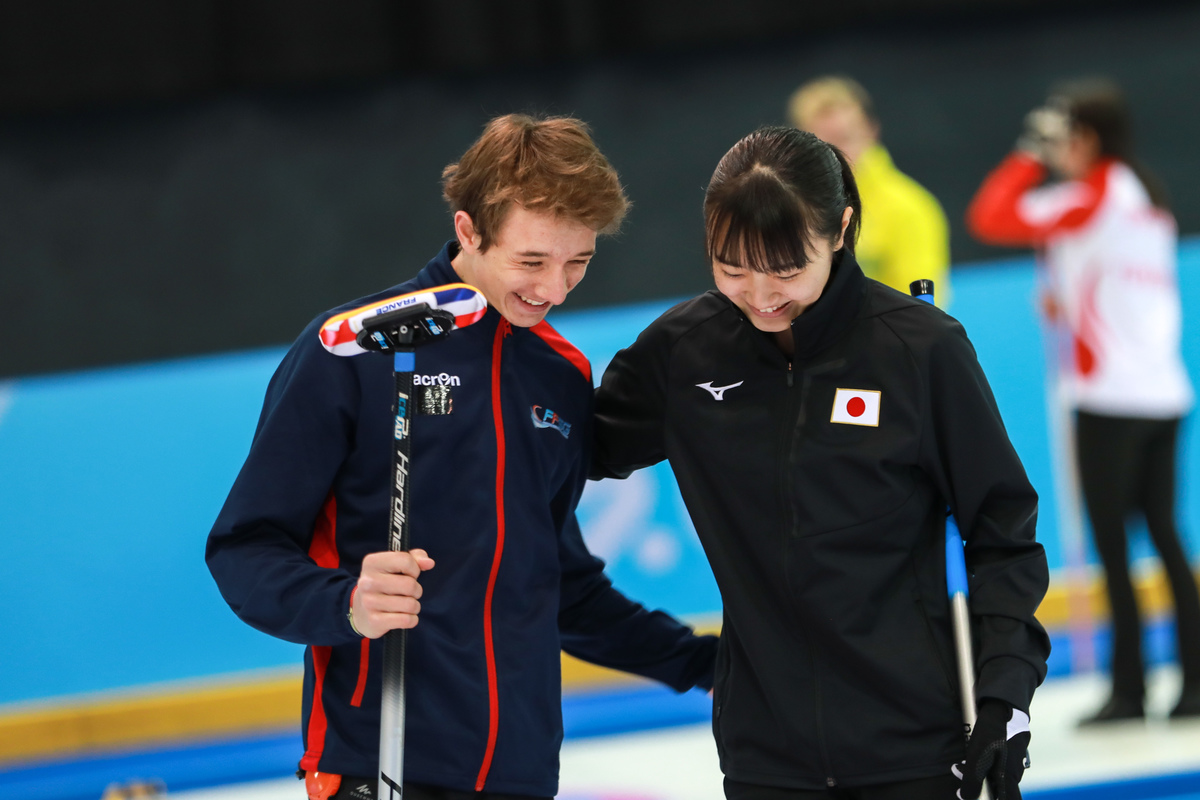 The mixed doubles competition at the Youth Olympic Games Lausanne 2020 got underway on Saturday (18 January) at the Champery Curling Club in Switzerland.

A total of 48 teams were paired together, with one female and one male player from different National Olympic Committees. These teams were based on the athletes’ position within their team and their nation’s overall position at the end of the mixed competition.

The competition is a single knock out event with three sessions a day until Wednesday (22 January) when the medal games take place. After day one action, 12 teams advanced to the Round of 24 on Monday (20 January) while the second Round of 48 will be played tomorrow (19 January).

Leo Tuaz: “It was a beautiful experience. When I played the first two ends it was a new game a new strategy and a lot of changing but it was a really good experience. I am excited we get to play more games – it’s great if you win because you get to play more games but if you lose you don’t. I don’t speak very good English but the communication we use the signals and it is very good. [on the winning shot] I was very nervous, but she [Mina Kobayashi] was very, very nervous and the last shot was beautiful!”

Jamie Rankin: First of all, we just sort of spoke to each other on the bus to the venue, just asking ‘where we’re from’, ‘how long we’ve been curling’, ‘what sort of things we do after school’, that sort of thing. And then with the coach, we spoke about the on ice stuff, how we’re going to communicate, what order we’re going to play in. And just went on, and that was it really. Obviously it worked for us today, getting the win, so I think we will just keep it as it was.”

Marta Lo Deserto: I feel very good with him because we are very happy together and we are the same with the decision and all the things. And it’s very good. If we lost a shot we said to each other ‘no problem, it’s good’, and after we can do better. We are a great team I think. We can do very strong.

Nikolai Lysakov: It was a very intense game, we had our ups and downs, especially in the fifth which was a disaster for us with minus four on the scoreboard, but somehow we managed to get back into the game and just stay together and support each other.

Nilla Hallstroem: “We didn’t play so good in the first end, but we stepped up our game, and to the end we didn’t play so good either, but they didn’t either. So it was good. We didn’t argue and stuff, we can’t talk, because we don’t speak the same language, but I think we just tried to talk and we made it.”

Vit Chabicovsky: “So, I guess we had our speed with the ice pretty great. So, I mean we had in the first part of the game really great draws, and we probably read the ice quite well. In the first ends, it was a bit like wild, but then we figured out and I think we can communicate pretty great.”