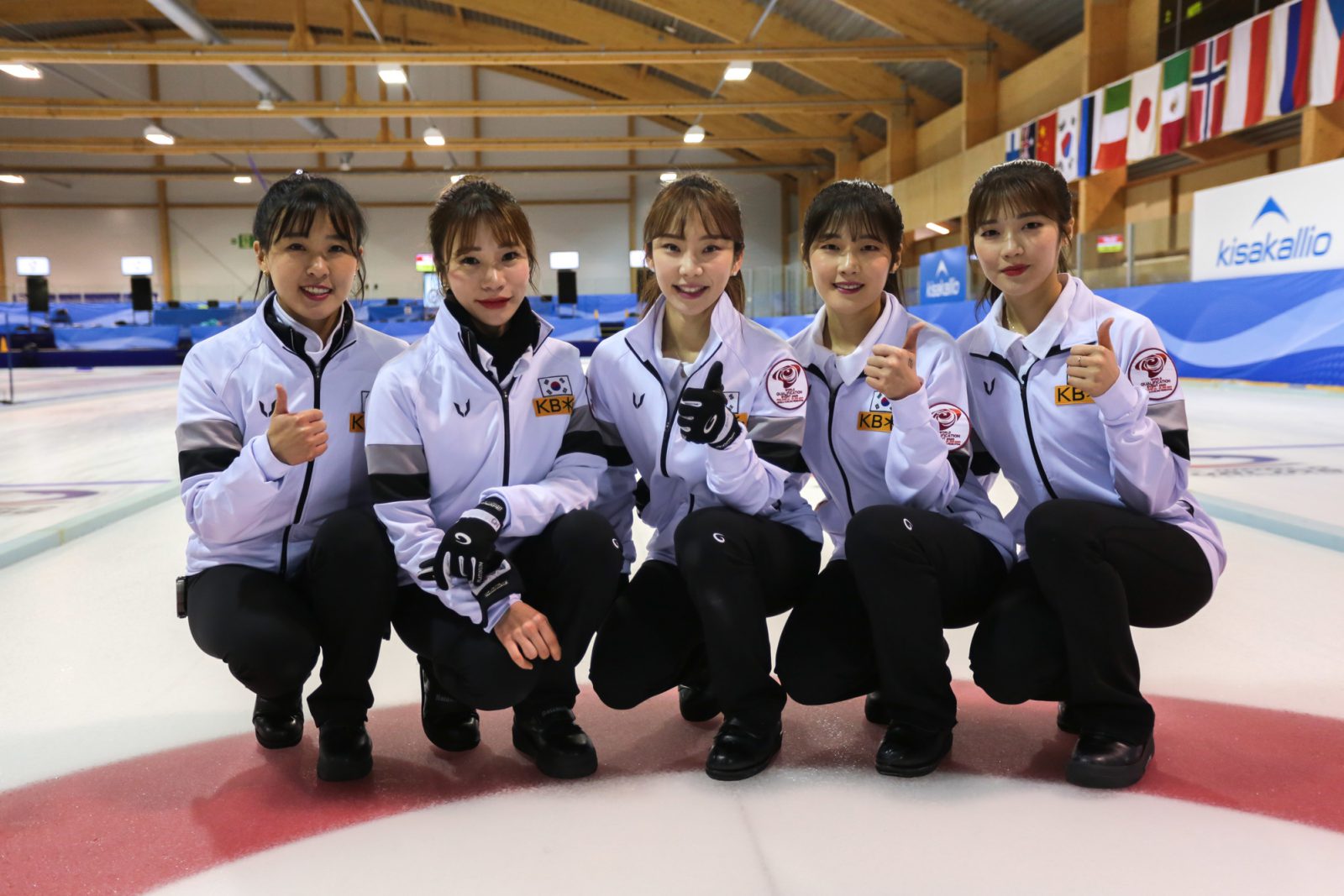 On Saturday (18 January) morning at the Kisakallio Sports Institute in Lohja, Finland Korea women and China men were the first teams to claim world championship places, after winning the opening play-off games at the World Qualification Event 2020.

Korea – skipped by Un Chi Gim, with third Min Ji Um, second Su Ji Kim, lead Ye Eun Seol, and support from alternate Dong Ho Seol and coach, Dong Ho Shin – were undefeated coming into this play-off game and opened the scoring with a draw for a single point in the first end. Italy responded with an open hit for two points in the second end and the early lead.

Korea had the chance to retake the lead in the third end, but skip, Gim’s attempt to promote one of their own stones into scoring position caught a guard and Korea had to settle for a single point from the end.

Korea then scored a single point in the sixth end, before applying pressure to Italy in the seventh end, forcing a steal of one point after Italy skip, Veronica Zappone’s, hit and roll was heavy after facing four Korean counters.

Korea then stole another single point in the eighth end before Italy levelled the score in the ninth end.

Then, in the tenth end, with her final stone, Gim played a draw to the four-foot for the single point, the win and a place in the World Women’s Curling Championship 2020, taking place in Prince George, Canada, from 14-22 March.

After claiming their place at the world championship, Gim said, “I am really, really happy with this result. I wasn’t satisfied with the result from the Pacific-Asia championship in China, so I was a little tense, but we tried our best and we’re so happy. This week has been so great with the team. Korea have never won a gold medal in a world championship, so that’s our goal [in Canada].”

In the men’s first play-off game, China faced Russia and opened the scoring with a single point in the first end.

Russia levelled the game in the second end, with a precise draw into a crowded house for a single point.

China – skipped by Qiang Zou, with third Jiafeng Tian, second Zhiyu Wang, lead Jingtao Xu and support from alternate Peng Han and coach Soren Gran – then scored two points in the third end after Zou was left with an open hit to take a 3-1 lead.

China followed this with a steal of three points after Russian skip, Sergey Glukhov, caught a guard with his final stone draw attempt, when facing three Chinese counters.

Russia responded immediately from this setback with a score of four points in the fifth end, after Glokhov was left with an open hit of the lone China counter, to reduce the deficit to 5-6.

After blanking the sixth and seventh ends, China were left with an open draw for four points in the eighth end, after which Russia conceded, giving China the 10-5 win and a place in the LGT World Men’s Curling Championship 2020, being held in Glasgow, Scotland from 28 March to 5 April.

On making the world championship, Zou said, “We are really excited and happy we can go to a world championship. We know there are a lot of top teams there, so we’ll try out best to have good training and a team dynamic to do our best in each game. Hopefully we will have a good performance.”

The second qualification games take place this afternoon at 14:00 and will feature Italy versus Turkey in the women’s game, while Russia will face Japan in the men’s game. All times are Eastern European Time (EEST) which is UTC + 2.