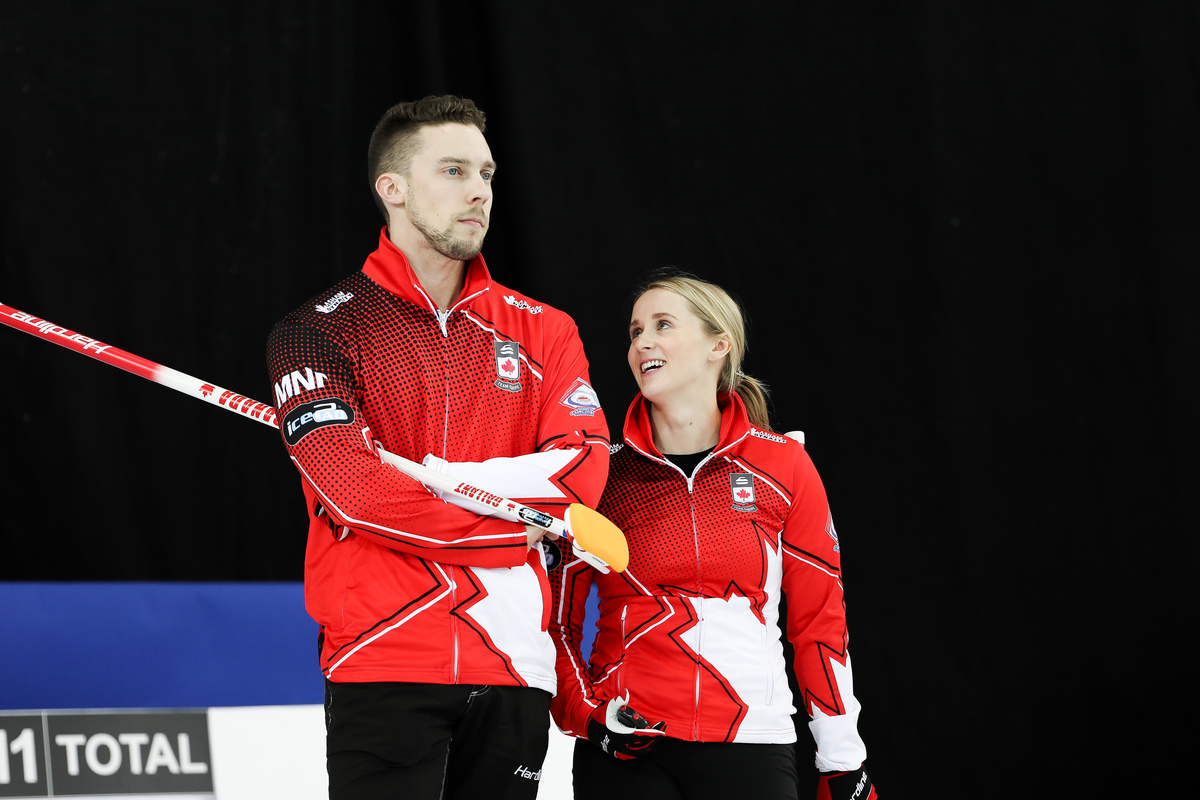 Canadian mixed doubles pair Brett Gallant and Jocelyn Peterman aren’t just your average mixed doubles team. Aside from partners on the ice, they’re also partners in day-to-day life and each compete on one of the top men’s and women’s curling teams in the world. Gallant, who plays second for Brad Gushue, and Peterman, who is second on Jennifer Jones’ team, recently came home with a silver medal from the World Mixed Doubles Curling Championship 2019.

Both Gallant and Peterman kicked off their curling careers as Canadian junior champions. Gallant finished with a silver medal at the World Junior Curling Championships in 2009 and Peterman came in sixth place in 2012. Soon after they both aged out of juniors, Gallant joined Brad Gushue’s team, while in 2015 Peterman teamed up with 2019 Canadian champion, Chelsea Carey.

That season, Peterman went on to win the Scotties Tournament of Hearts and represented Canada at the World Women’s Curling Championship in 2016. Gallant followed suit himself, winning the Brier in 2017 and 2018. At his first world championship, Gallant won gold on home soil against Niklas Edin. The following year was a repeat of the world championship final, but this time Sweden claimed the title, resulting in silver for Gallant.

How did you get involved in curling and what motivates you to continue to play at the top level?

Brett: My family got me involved in curling when I was quite young and I threw my first rocks when I was four years old. My parents Kathie and Peter have each competed in the Scotties and Brier respectively representing Prince Edward Island. Together they won a Canadian Mixed title in 1987 so you could say mixed curling success runs in our family!

Jocelyn: My dad was an ice maker when I was growing up so I spent a lot of time at the curling club. Both of my parents curled as well as all of my siblings so it was always something fun we could do as a family. I’ve always dreamed of playing in events like the Scotties and I feel very blessed to have had the opportunity but the goals I still plan to achieve are what motivate me.

Brett: My long-range goals include becoming an Olympic champion and to regain our World Men’s Title.

Jocelyn: My long-range goal is to be an Olympic gold medallist!

What is your greatest curling accomplishment?

Brett: Winning my first Brier in front of our home Newfoundland and Labrador crowd in 2017 was one of the greatest moments of my career. The energy in the building was electric and sweeping Brad’s final draw into the house is a shot I will never forget.

Jocelyn: My greatest curling accomplishment was winning the Scotties Tournament of Hearts in 2016 in my home province with all of my family there watching. The Scotties is something that I’ve always dreamed of playing in and to win my first time when I was only 22 was surreal.

On the flip side, what was your toughest loss in curling and what did you learn from it?

Brett: One of the toughest losses I’ve had was the 2009 World Junior final. I personally played poorly in the final and did not feel comfortable with the pressure during that game. I’ve learned that the mental side of the game is extremely important and that it requires training along with the other parts of the game.

Jocelyn: My toughest loss was losing the semi-final of the Mixed Doubles Olympic Curling Trials in 2018. It was just a month after losing the Women’s Olympic Trials final and after been so close to being an Olympian, it was really hard for me.

How did you meet and what were your first impressions of each other?

Brett: We first met at numerous events on the World Curling Tour. I was looking for someone to play mixed doubles with and asked Jocelyn to play with me. Our first event together was the 2016 Canadian championships which we ended up winning.

Jocelyn: We had known of each other for a long time but the first time we met was at a Grand Slam of Curling event and I thought that he was super kind and funny.

How much of your conversations revolve around curling?

Jocelyn: Honestly, if it’s not immediately after a game and we’re discussing how it went, we rarely talk curling?

What do you like to do when you’re not curling?

Brett: We both live and train in different provinces than our families, so we often try to see them when we get a break from curling. During the summer I like to hit the golf course as much as I can.

Jocelyn: I have been trying to take up golf as well, but I also enjoy playing softball. Mostly I like training and spending time with my family.

How do you balance dating a curler during the season? Do you think it’s trickier or easier both being curlers?

Brett: We try to visit each other as much as possible if we get a break in our schedules. We compete in the same events quite often throughout the season but it can be difficult to spend a lot of time together during events with both of our teams playing at different draw times. It can be tricky at times both being curlers but we understand completely each other’s commitment to compete at the highest level.

Jocelyn: What he said! But, we do often say that we probably see each other a lot more than we would if we weren’t dating curlers because a lot of our events are the same.

You both play on two of the best teams in the world just now. What are some of the things you’ve learned from your teammates, especially both of your skips being Olympic champions?

Brett: I’ve learned that success doesn’t happen without a lot of attention to detail and a lot of hard work. Brad, Mark and Geoff are some of the hardest working teammates I’ve ever had and their motivation to always improve is contagious.

Jocelyn: I’ve learned a lot from my teammates. I’ve how much commitment and hard work it takes to continuously work to be better than you were before in every aspect of the game and to never be complacent.

Jocelyn, how has the move to Manitoba been and better yet, how is rooming with Kaitlyn [Lawes]?

Everyone in Manitoba has been so welcoming. I have a great trainer in Winnipeg and it’s nice to be able to practice with my team. And, living with Kaitlyn has been great! We didn’t know each other too well before I joined the team, so it’s been a great way to get to know each other.

Brett, what did you think of your dad coaching Korea at the Olympics? Who were you cheering for?!

It was incredible for me to watch my Dad coach in the Olympic final. He has a very strong passion and knowledge for the sport and I was very proud to see him share that with Team Kim and contribute to their silver medal. As a Canadian I was certainly cheering for Canada at every opportunity but as a son I had to root for my father and his team.

What is it like watching each other compete in a big game versus playing yourself? What makes you more nervous?

Brett: It is way more nerve wracking watching Jocelyn compete than competing myself. Watching her compete in the Olympic Trials final was one of the most nerve wracking games of my life.

Jocelyn: Same, I don’t often get too nervous or high strung when I curl, but I definitely do while watching Brett. I think when I’m on the ice I’ve worked hard at having the skills to keep my emotions in check, but when I’m watching that goes out the window. I think it’s just because I see every day how hard he works and how much he puts into the game, that when it doesn’t work out I’m often more heart broken than him.

What was it like playing mixed doubles at the Worlds with your partner?

Brett: It was a surreal opportunity to share the experience with Jocelyn. At the time we were just trying to play our best and win a world championship for Canada. Reflecting on it now, it’s a week that will always be special for us because we were able to go through the ups and downs together and I’m very proud of our performance.

Jocelyn: It was incredible to play at a world championship with Brett. We just work really well together and really enjoy playing together. We were super focused and motivated at the World Mixed Doubles but were happy with how we played and realise how lucky we were to have had the opportunity to go through it as a couple.

Thank you, Brett and Jocelyn, for the insight into your curling career so far and all the best in your future endeavours.