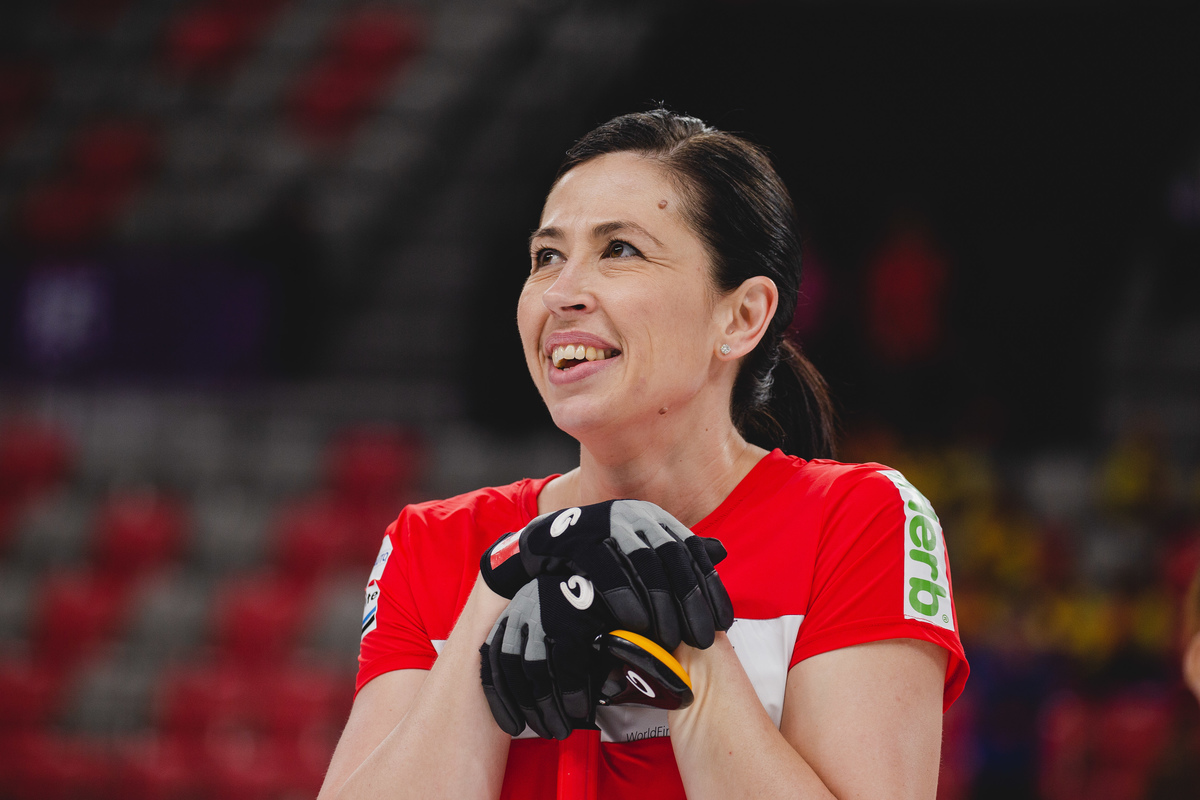 We’re back to find out more about Canada’s and the World Curling’s Athlete Commission member, Jill Officer…

You recently took a step back from playing competitively. What has that transition been like? What have you been up to all year?

Well, this is a loaded question! The transition has been both great and difficult. Great because there are so many things I don’t need to do and worry about anymore, like sponsorship, season planning and some of the same old routines. But, also very difficult because at the beginning of last season I felt lost. I felt left out when everyone else was practicing and going off to their events. Then I got a job as an analyst with CBC (Canadian Broadcasting Corporation), so I was able to go to some of the Slams, which was great to catch up with everyone. Also, it was really weird because I wasn’t out there, especially when Team Jones was playing. My year ended up consisting of a mish-mash of things between the broadcasting, fifth player, playing a few events, a couple of trips for meetings after being elected to the World Curling Athlete Commission and then capping it off with a win, with Team Jones, at the Curling World Cup Grand Final in Beijing.

You also recently returned from a trip to Northern Canada. What were you doing there and how was the experience?

Yes, I just returned from a ten day expedition cruise to Baffin Island which is part of Canada and Greenland. This trip was a result of a sponsorship of the Scotties Tournament of Hearts in Sydney last year. One Ocean Expeditions, which uses the port in Sydney, sponsored the Scotties. Part of their sponsorship was to give away a trip with a celebrity curler, which obviously turned out to be me.  Kim Warburton, who does sponsorships for Curling Canada, called me about being the celebrity curler. Then One Ocean ended up giving away two trips at the Scotties. So there were two couples from Sydney plus myself, my husband and our seven-and-a-half-year-old daughter (the half is very important at her age). The experience itself was absolutely incredible. The scenery was remarkable and almost unbelievable. We had encounters with a polar bear and a number of humpback whales. We learned about the Inuit culture of Northern Canada and had to opportunity to see the Greenland Ice Cap. And, all that is just a small part of the experience. I am so grateful to Kim and to One Ocean for the opportunity and would love to plan a trip with them to now go to the other end of the world, Antarctica.

We are in Ilulissat, Greenland tonight! This is one of the few times I’ve had cell service & time to post. I can’t possibly show & tell everything we’ve seen on this amazing trip with @OneOceanExp but here are a few. pic.twitter.com/MzUO8Rn9IC

How important is it for you to give back to the game now that you’re not a full-time athlete?

Now that I am not playing full-time and have had time to reflect, I have thought about the challenges and struggles I faced in my career and I would like to use that knowledge and experience to help others. I also feel curling has given me so much that if I can help grow the game or make it better for our athletes that it would be important for me to do that.

Where else have you traveled for curling? Do you have any memorable travel stories to share?

Oh wow, I have traveled so many places for curling – so many places that I never would have dreamed of traveling to when I was in juniors or even early in my women’s career. Who would have thought I would curl in Las Vegas, Siberia, Korea or China?!

I have many memorable travel stories, but I think one of our best ones was the first trip we went on when Kaitlyn joined the team in 2010. We did a side-trip to Istanbul before competition. We decided to do a Turkish Bath. We were always of the mindset to do as the locals do, so we did the bath naked – some tourists wore a bathing suit or part of one. If you’ve ever done a Turkish Bath you know that someone else bathes you and washes your hair. So, this all ended up being an interesting experience with each other, as one of the first things we experienced with Kaitlyn, especially when we couldn’t find our shoes in the bath and we wandered naked aimlessly looking for them! Talk about team bonding!

What is some of the greatest advice you’ve been given?

My dad was a pretty good hockey goalie when he was young and he always told me, “If you’re not nervous you’re not ready”. I always played my best when I was nervous before a game.

Also, my grandpa used to tell me, “That anyone can beat anyone on any given day on any sheet of ice”. It was always a good perspective to have so you never let your guard down in any game.

What are your plans for the upcoming season?

Good question. I still feel like I am transitioning and trying to find my way toward something I am passionate about. I hope to do some more broadcasting and I would like to plug away at my coaching certification. I would also like to explore some potential education opportunities.

Thank you, Jill, for the insight into your curling career so far and all the best in your future endeavours.