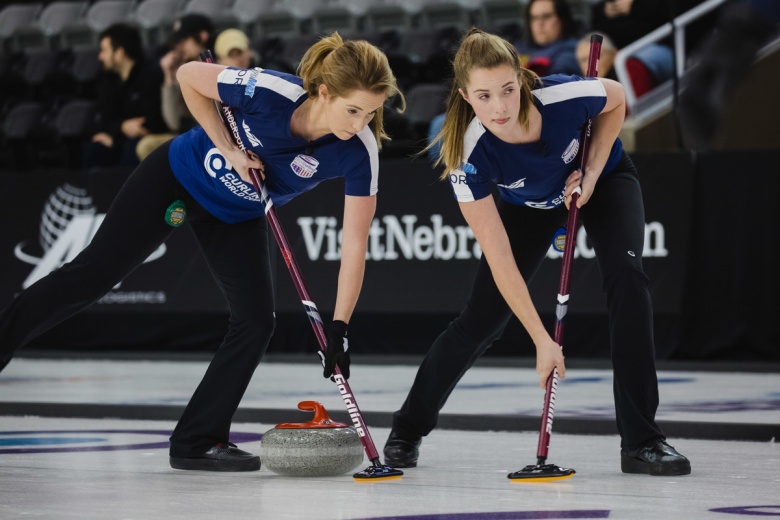 Juggling studies and elite sport: The life of student curlers

The ice isn’t the only required reading for some of the world’s most elite curlers. For many young people who compete internationally in curling, passion for the sport means they’re faced with balancing both their studies and rigorous training schedules as they compete to represent their nations on the world stage.

Just like a smooth delivery, it takes balance, especially in nations where university curling isn’t an official school sport.

“Sarah likes to sit in the front row in lectures,” said Taylor Anderson of her twin sister. The sisters have represented United States in curling at the 2012 Youth Olympic Games – in Innsbruck, Austria – and at an impressive resume of junior and women’s world curling championships since. They’re eyeing Beijing 2022 as their ultimate goal.

“I like to sit in the third row,” Sarah said, clarifying. When you’re in a giant lecture hall, there’s not much difference between those in the first and third row. They usually have the same goal in mind – to get to know the professor.

“Creating a really good relationship with your professors is key,” said Sarah, who is pursuing a kinesiology degree part time at the University of Minnesota. Taylor is at the same school studying business management.

At the University of Minnesota, curling isn’t an official sport so the sisters are mostly on their own when it comes to negotiating with professors how many classes they can miss and how lenient due dates will be. American schools typically have programmes in place to assist student athletes with scheduling classes and planning their degrees, but because the sport isn’t a varsity sport the girls have less structured support. While the sisters say many of their professors are understanding, the pressure of balancing full-time school with their Olympic dreams can get overwhelming.

“I started in the nursing programme and it ended up that I was getting very busy with curling and nursing, so I decided to switch majors and go more into curling,” said Sarah. “At the end of sophomore year we started going part time because we couldn’t do both to the level we wanted to.”

To find balance, both sisters, who are fourth-year seniors, focus on curling during the season and resume school in the spring and summer months. They also have a few tips and tricks they use to capitalise on their time.

“I like audio books. They’re nice to listen to on the plane,” Taylor said. “That helps a lot with keeping up with your reading. And, you definitely have to take really, really good notes. Because you’re missing a lot of lectures.”

Just north of the border in Canada the situation for student curlers is slightly different. Many Canadian universities have official curling teams that play each other, so the opportunity to represent your school in curling makes balancing class and sport less of an administrative headache.

“It helps a lot when you are on a University of Alberta team and you can say that you are representing your school,” said Karsten Sturmay [pictured above, © Curling Canada] of Edmonton, Alberta who is majoring in chemistry at the University of Alberta. He’ll be representing Canada at the 2019 Winter Universiade in Krasnoyarsk, Russia this (2-12) March, a global, multi-sport competition for university students.“At the end of the day,” said Sturmay, “I think the role of the student athlete has grown a lot in the last couple years. Professors really understand there’s more going on in people lives instead of just academics.”

Yet even with the support of his school the skip found it easier to take fewer classes each semester so he could pursue curling, and work opportunities, alongside his studies. “It’s definitely a balancing act. One thing that does help was spreading my degree over a slightly longer time helps me take a reduced course load which helped me keep my head above water,” he said. Sturmay is in his fifth year as a full-time student.

Yet the pressure of studies and curling hasn’t been enough to make any of the curlers give up on their dreams. “It’s always been a lifelong dream of mine to be able to go compete and put a maple leaf on my back,” said Sturmay. The Anderson twins similarly also admitted they’re taking steps toward what they hope will be an appearance at the Beijing Olympic Winter Games.

Until they walk across the stage, degree in hand, don’t be surprised if you see any of these curlers wearing their country’s colours while also shuffling cue cards and notes as they balance both sets of priorities.