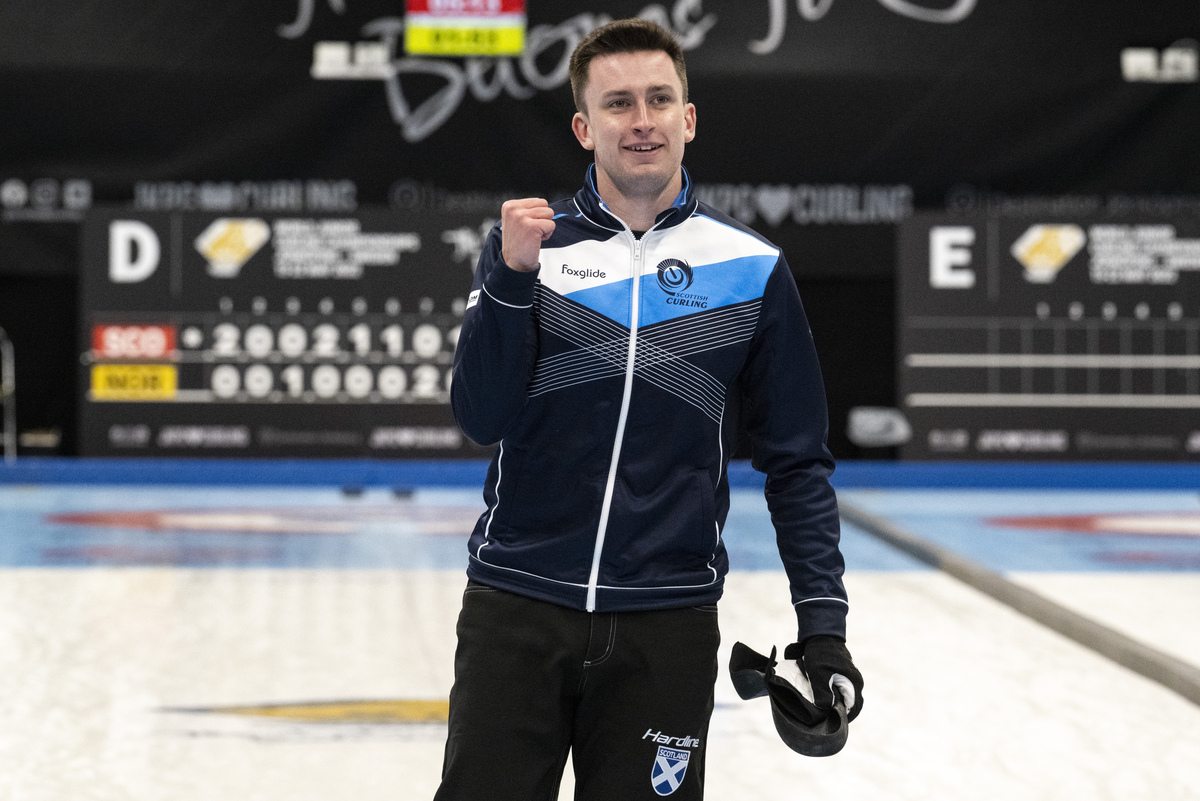 On Saturday afternoon the men played their semi-finals at the World Junior Curling Championships 2022. Germany took on Canada, while Scotland played Norway.

Germany blanked the first end. Canada skip Owen Purcell came up short with his last stone of the second and handed Germany a golden opportunity to score two. Benjamin Kapp didn’t miss out on that and opened the scoring with two.

The third end was another blank, this time, by Canada. In the fourth, Germany were sitting two before Canada’s last. Purcell wrecked on a guard on the way to the house, and Canada gave up two. Germany were leading the game by 4-0 after four ends.

In the fifth, Purcell tapped out the German counter sitting on the four-foot and Canada got on the board with two. The teams went into the break with 4-2, Germany leading.

Purcell wrecked on a guard with his last in the sixth end, giving Germany a chance to draw for two. Kapp, however, was light, and Germany could only score a single.

In the seventh, Purcell played a difficult runback for two points to narrow the gap to a single point, 5-4 for Germany.

In the eighth, after his take-out, Purcell couldn’t roll in with his shooter to sit shot stone, and it opened the door for Germany to draw for two. Kapp executed it perfectly to restore the difference to three points, at 7-4.

In the ninth, Germany filled the house with red stones without hammer, and Purcell needed to draw against four to take his single. He just did that, for 7-5.

In the tenth end, Kapp executed an open take-out for one, for the win and for a place in the Gold medal game. The final score was 8-5.

A very happy Benjamin Kapp reflected on the game, saying, “It is unbelievable, we are so happy with our performance, and now we are very excited for the final. I think the 4-0 lead gave us a big advantage, but then our opponent played better and it got tight in the end.”

Commenting on his lead, Magnus Sutor’s tick shot in the last end, he added: “It was a game winning shot and he did a great job.”

Scotland had last stone in the first end against Norway.

As Norwegian skip Grunde Buraas rolled out with his shooter on an attempted hit-and-roll, he gave Scotland the opportunity to draw for two.

Scottish skip James Craik was perfect with his last, and opened the scoring with two. Following a blank second end, Norway scored one in the third after a perfect double take-out by Grunde.

In the fourth, Grunde’s difficult double take-out attempt could remove only one Scottish counter, and Craik was able to draw for two. He didn’t make a mistake, and added two more points on the board to go up, 4-1.

In the fifth, Grunde elected to play a double take-out with his last, but his shooter rolled out once again, giving up a steal of one. The teams went into the break by 5-1, Scotland leading.

In the sixth, Grunde attempted a hit-and-stay on the Scottish shot stone, but rolled too far and gave up another single.

In the seventh, Norway managed to put their first multiple score on the board, following a tap by Grunde. With this, they reduced their deficit to three points, 6-3.

In the next end, Craik played a hit on the Norwegian shot stone to take a single for 7-3.

In the ninth, Grunde executed an open hit for two and for a 7-5 score, Scotland leading.

In the tenth end, Scotland ran Norway out of stones and with this, qualified for the final.

After their victory, Scotland skip James Craik said, “This is something we’ve had our eyes set on and to get a chance to play in this final is going to be something special. We’re playing against our friends, Germany, so it’s going to be a really great contest, and hopefully a great match to watch and play in.”

Reflecting on the tournament so far, he added, “This week has been more than a skip could ask for, my team has played awesome, they’ve stuck by me so much, and genuinely been so great. We’re are shooting the lights out and having a blast whilst we’re doing it so hopefully we can bring home the gold and make it all worth it.”

The men’s Gold medal game will take place on Sunday (22 May) and will see Germany taking on Scotland. Canada and Norway will play for the bronze medals at the same time.
In the evening the women played their semi-finals. Norway saw hosts Sweden, while Japan met United States.

Norway had hammer in the first end, and scored two after Norwegian skip Eirin Mesloe tapped out the Swedish shot stone with her last.

Patience paid off for them, as they put together a great fourth end, which resulted in a score of three. At this point, Sweden were leading the game by 3-2.

In the fifth end, Norway tied the game at 3-3 with a score of one.

Sweden blanked the sixth and the seventh ends. In the eighth Swedish skip Moa Dryburgh faced five Norway stones when she played her last. To the delight of the home crowd, her tap was successful, which resulted in a single point for Sweden to go up, 4-3.

In the ninth, Norway skip Eirin Mesloe wrecked on a guard with her first, and then was only partly successful with her double take-out attempt with her second. This meant that Norway could only take a single to tie the game at 4-4, going into the last end.

Dryburgh needed a hit-and-stay to score a single and win the game in the tenth. She just did that, which qualified Sweden for the Gold medal game.

After their victory, a delighted Dryburgh said, “It’s a dream come true. I don’t know what to say, I’m shook. It has been a rollercoaster, it’s been up and down and it was hardly that we made the play-offs, but everything went our way so it just feels amazing and we’re so excited to be here.”

Talking about her mentality before throwing the last stone of the game, she added, “I didn’t think that much, I thought all my shots were pretty good this game so I was pretty secure. So I was just ‘okay don’t think, just go’ and that is what I did and it worked out well.”

After the first blank end, Japan managed to steal one in the second, as United States skip Delaney Strouse couldn’t tap out the Japanese counter from shot position.

Japan stole a second point in the third end when Strouse’s shooter rolled out on her hit-and-stay attempt.

United States got on the board in the fourth end with a precise draw for one by Strouse. After four ends, Japan were holding a one-point lead, at 2-1.

After an exceptional double take-out by Japan fourth player Ueno Miyu, Japan scored a single in the fifth to lead the game by 3-1 at half time.

In the sixth end, Strouse threw for two. Helped by the sweeping efforts of her three teammates, she was successful with the attempt and tied the game at 3-3.

Japan blanked the seventh end and score a single in the eighth to take the lead again, at 4-3.

In the ninth, Strouse faced three Japan stones when she threw her last. She came up short and gave up a steal of three.

Japan therefore lead the game by four points, at 7-3, going into the tenth. In that tenth, Japan ran United States out of stones and booked their place in the Gold medal final.

After the game, Japanese fourth player, Ueno Miyu said, “I’m so happy to advance to the final. Our goal is to win the gold medal, so we now have the ticket to play for it. We are just going to concentrate on staying the way we are and trying our best in the final game.”

The women’s medal games take place on Sunday (22 May) at 14.00. Sweden will take on Japan for the gold medals and the World title, while Norway and United States will play for bronze.