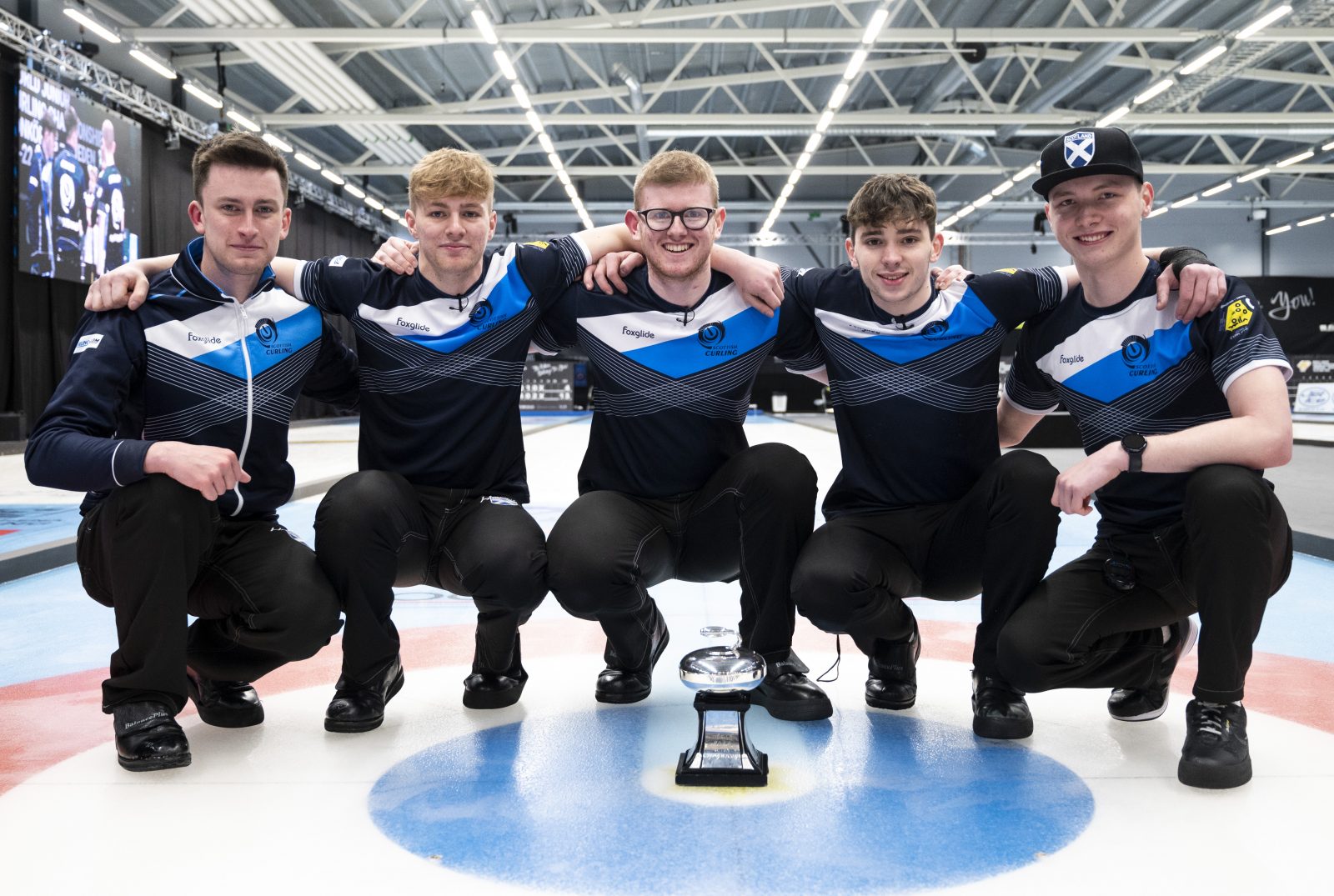 On Sunday morning the men’s medal games of the World Junior Curling Championships 2022 were held in the Jönköping Curling Club. Scotland and Germany played for the gold medals and the world title, while Norway and Canada met for the bronze medals.

Scotland had last stone in the first end. Scottish skip James Craik had a complete miss on his first stone, which then forced him to play a hit-and-stay for one with his last. He just did that and put a single on the board for Scotland.

After a blanked second end German skip Benjamin Kapp was forced to draw for a single. He was heavy with it and Germany gave up a steal of two to Scotland. The Scottish were leading by 3-0 after three ends of play.

In the fourth, Scotland forced Kapp to play a precise draw to the one-foot to score a single. He did that and put Germany on the scoreboard. After four ends, Scotland were leading by 3-1.

After a blank fifth, the teams went into the half-time break with this 3-1 result.

Craik made a perfect tap for two in the sixth to extend Scotland’s lead to four points, at 5-1.

In the seventh, Kapp was not perfect with his difficult take-out attempt, which resulted in a steal of one for Scotland, for 6-1.

A further steal of one by Scotland put the game beyond Germany’s reach, who conceded defeat after eight ends with 7-1 as the final result.

After claiming the World Junior title, Scotland skip James Craik said, “It feels pretty crazy right now, I don’t really believe it just now. I’m just so proud of the boys. They came out and shot the lights out there and played so well. That was one of our most clinical performances.”

Reflecting on the entire tournament, he added, “Our week was perfect. I’m so over the moon. We had a great time here in Sweden, it was just fantastic. I couldn’t be prouder of the guys and all the team behind us and we’re just so thankful.”

Canada had hammer in the first end. Norway forced Canada skip Owen Purcell to draw for a single against three Norwegian stones. He executed the task and got his team on the board.

Norway responded with two points after an open hit for two by Norway skip Grunde Buraas.

In the third, Canada put great pressure on Norway, who asked for a time-out before Buraas’ last. His difficult hit didn’t turn out the way he wanted it to, which allowed Canada to draw for four. Purcell didn’t miss the chance and put four on the board to go up, 5-2.

In the fourth, Buraas attempted a double take-out, but he had a complete miss on it. It resulted in a steal of two for Canada, for 7-2.

Buraas hit for one in the fifth. The teams therefore went into the break with 7-3, Canada leading.

In the sixth Purcell made a controlled take-out on the lone Norwegian shot stone to remove it completely from the house and put four on the board. After six, Canada held an eight-point lead, at 11-3.

In the seventh end, Norway changed their line-up. Original skip Lukas Hoestmaelingen, who joined the team later in the competition as alternate, replaced skip Buraas. He made a hit-and-stay for one at the end of the seventh to reduce his team’s deficit, 11-4.

In the eighth, Canada put two more on the board for 13-4, after which Norway conceded defeat. Canada are the World Junior Curling Championships 2022 bronze medal winning men’s team, while Norway finished fourth.

After the game, a delighted Canada skip Owen Purcell said, “It’s fantastic. Especially to come out playing as well as we did after a tough loss yesterday, it feels great. We really showed a lot of fight, grit and tenacity. I think what we managed to do after starting the week at 0-2, is pretty incredible.”

Talking about the support system around his team, he added “It’s always key to have those support systems when you’re away at these events because it’s a long event and you need the people to be able to get your through the highs and the lows. It’s pretty great to have the people back home and the people here.”

The women’s medal games take place on Sunday  (22 May) at 14.00. Sweden will take on Japan for the gold medals and the World title, while Norway and United States will play for bronze.