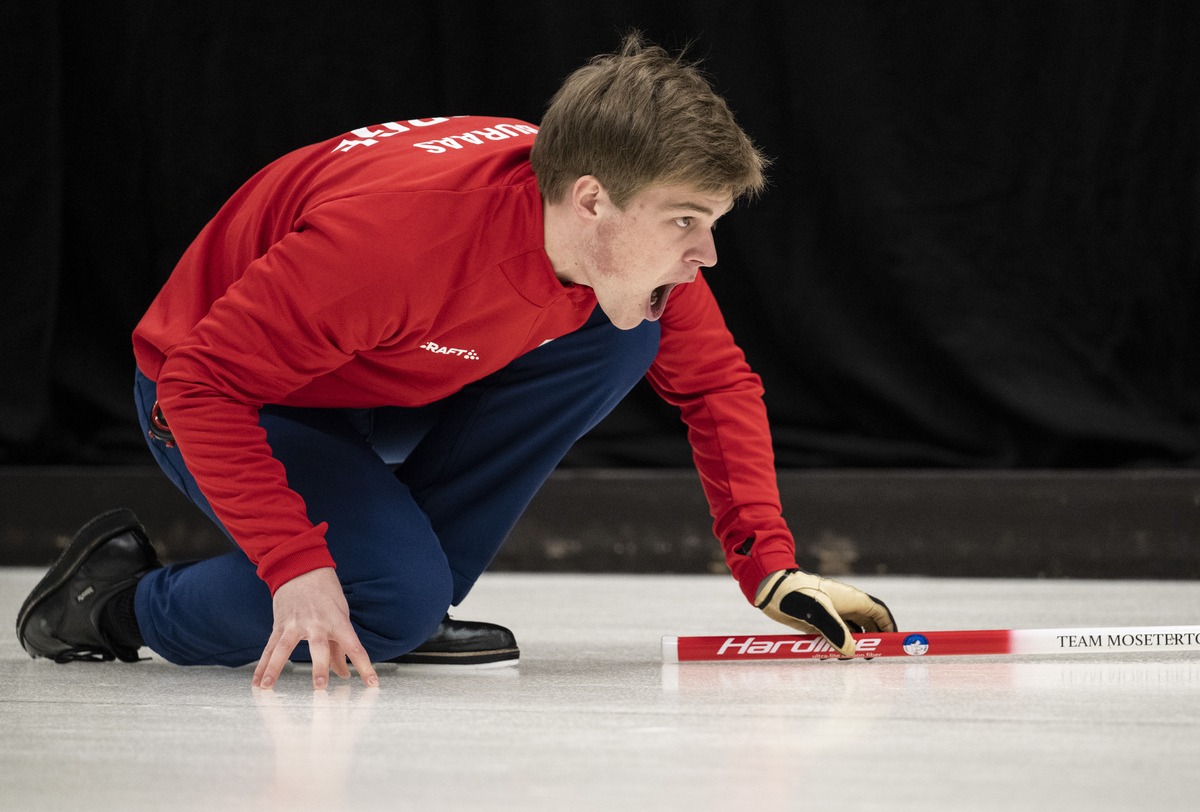 All ten men’s teams took to the ice on Sunday morning for the first session at the World Junior Curling Championships, being held in Jönköping, Sweden.

Title defending nation, Canada faced United States, while hosts, Sweden played against Switzerland. In the other games, Norway met New Zealand, Germany were up against Italy and Scotland played Korea.

In the North American battle, United States capitalised on their last-stone advantage in the first end, scoring two. Canada responded with a three after a perfectly-executed take-out by their skip, Owen Purcell.

After a missed take-out attempt by American skip Daniel Casper, Canada stole two in the third.

In the fifth, United States put a three on the board to tie the game at 5-5, going into the break.

The lead exchanged hands throughout the second half. Going into the tenth end, Canada were leading by 10-9 and United States had hammer. The Americans made use of their last-stone advantage, scored two and won the game by 11-10.

After their win, Daniel Casper said, “Games like that are fun, we love those. You know, at the World Championship, first game, lots to figure out; the ice and everything else. I think that’s probably why it was back-and-forth, high-scoring. But it was super fun.”

In their game against Sweden, Switzerland put three on the board in the third end to take a 4-1 lead.

Sweden scored three right back to tie the game at 4-4.

Going into the eighth end, Switzerland were leading by 6-5. In that end, the Swiss put a big score of four on the board, after which Sweden conceded defeat with a 10-5 final score.

Before their game against New Zealand, Norway needed to shake up their initial line-up, as their original skip, Youth Olympic champion Lukas Hoestmaelingen couldn’t travel to the event.

Norway were leading the game by 3-1 after three ends, but a perfect double take-out by New Zealand skip William Becker resulted in a score of two and a tied game after four ends.

Norway made a breakthrough in the fifth with a big score of five to take an 8-3 lead.

They followed that up with a steal of two in the sixth for 10-3. New Zealand responded with a two in the eight, but after a score of four by Norway in the ninth, New Zealand conceded the game with a 14-5 final result.

After their win, Norway skip, Grunde Buraas said, “It was good, we started a little bit slow, but once we got hold of the ice and got in the rhythm, then we really just pulled away and it was just about controlling the game the last three ends when we got the big end. We felt the big end was coming because we really put the pressure on them from the second end all the way out.”

Commenting on their new line-up, he added, “Since our skip, Lukas got sick and couldn’t play, we just tried to do our best.”

Germany and Italy were tied at 1-1 after three ends. In the fourth, Italy skip Giacomo Colli came up short with his draw attempt, giving up a steal of three.

This proved to be crucial in the game, as only single scores and blank ends were produced later in the game. Eventually, Italy won by 6-2.

After the game, Germany skip, Benjamin Kapp said, “We feel very good, we are happy that we won the first game, and we are looking forward to some more. We tried to keep it simple and it worked really well for us.”

The game between Scotland and Korea was a back-and-forth battle throughout. They went into the break tied a 4-4, and then they were tied again after eight, at 5-5. Scotland scored an important two in the ninth to go into the tenth end with a two-point lead. In the last end, the Scottish eventually stole a single, making the final score 8-5.

It was a two-point game throughout the first six ends until the Swedish team executed a nose-hit for four points to take a 7-1 lead over the Swiss.

Despite stealing single points in ends eight and nine, Switzerland conceded after nine ends, with a final score of 7-3 for Sweden.

Swedish skip, Moa Dryburgh, spoke after the game saying, “It is really fun to play in our first World Juniors. It’s very special to have friends and family cheering us on.”

Japan started off their game strong against Korea, taking an early lead in the second end with a score of three points. After exchanges of two points in the fourth, fifth, sixth and seventh ends, the score was 8-4 for the Japanese team.

Korea managed to steal single points in the eighth and ninth ends, but ultimately conceded a 9-6 victory to Japan.

Norway and Denmark put on a close game during all ten ends.

Despite Norway holding a 5-2 lead at the half-time break, Denmark responded in the sixth end with a score of three to tie the game.

Exchanges of single points followed, but with a score of two in the seventh end and a steal of one more in eighth, Norway came out on top of Denmark with a final score of 9-6.

Another close game was fought between United States and Latvia.

After eight ends, the score was tied at 6-6.

A couple of tough misses from United States allowed Latvia to capitalise on their last-stone advantage to score four points in the ninth end.

Latvian skip, Evelina Barone, expressed, “We knew we needed to score at least a couple in the ninth end, and to get four was awesome.”

In the fifth game of the session, Scotland faced Canada.

After three ends, the Canadian team held a 5-0 lead, but with a score of three in the third end and a steal of two more in the fourth, the Scottish tied up the game.

Scotland’s perseverance continued in the second half of the game, scoring another two points in the seventh end and a single in the tenth.

This gave Scotland a 9-7 win over Canada.

In the evening, it was again the men’s turn to play.

United States met Scotland, New Zealand played Korea and Canada were up against Germany. Switzerland face Italy, while Sweden and Norway played each other.

Scotland had a solid game against United States, stealing in five consecutive ends to take a 6-0 lead after six. United States scored a single in the seventh.

Scotland had last-stone advantage for the first time in the eighth end, and they used it to score three. United States conceded defeat at this point, with a final score of 9-1.

After their win, Scotland skip James Craik said, “We’re really buzzing after that. We came out, the ice was a little bit tricky tonight, probably the first evening session may be the reason. But we came out sharp and really ready to tackle it. We had hammer once and it was in the last end and we made three, and we still managed to score six other shots and force them to one which was really good. Their skip struggled a wee bit, but we really didn’t give them much chance.”

Korea were leading the game against New Zealand by 3-1 after four ends. In the fifth and sixth ends, Korea produced nine points altogether — with a score of five, followed by a steal of three — for a 12-1 lead after six ends. At this point, New Zealand conceded making 12-1 the final score.

Germany were leading their game against Canada by 3-1 after four ends. Then, the Germans stole a single in the fifth and three in the sixth to extend their lead.

Canada put their second single point on the board in the seventh, before conceding the game with a 7-2 final result.

Following their victory, Germany skip Benjamin Kapp said, “We are super happy after the game, very happy about the performance, and we are looking forward to some more wins. I think our mentality [made the difference]. We were very happy and proud of ourselves, and we kept it simple and it made it easy for us.”

Switzerland and Italy had a close battle for the entire game. They traded the lead five times over the first six ends. After six, Italy were leading by 7-5.

In the seventh, Switzerland tied the game with a score of two.

Going into the tenth, Italy were leading by 9-7. In the tenth, Italy skip, Giacomo Colli made an exceptional double take-out with his last stone to run Switzerland out of stones and make 9-7 the final score.

The Nordic match-up was another close one. The teams were tied at 3-3 after three ends, then at 4-4 after five.

Sweden were leading by 7-5 going into the tenth end. In that end, Norway capitalised on their hammer, scored four, and eventually won the game by two points, 9-7.