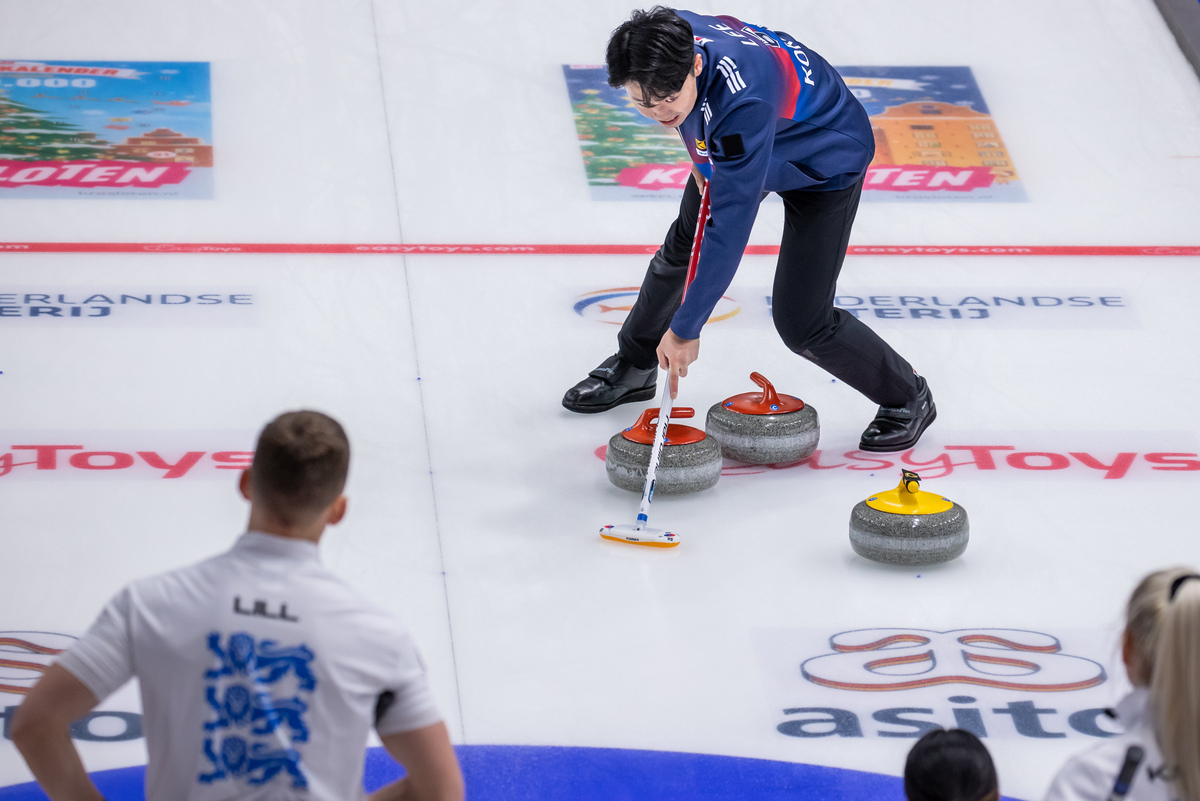 Korea and United States stay locked together at the top of Group B after the ninth session of Mixed Doubles play at the OQE2021, both staying unbeaten on four wins.

United States beat Latvia 10-3 in seven ends. By contrast it took a steal of two points in an extra end before Korea overcame Estonia by 10-8.

Despite their final draw of the first end coming up short, United States still managed to score three points to open the scoring. United States then had a single steal in the fourth end when Latvia’s Daina Barone came up short with her final draw. The Americans went into the break with a 7-1 lead.

In the fifth end, Latvia’s Barone cleared out two American stones to score two points and reduce United States’ lead to 7-3. United States scored one more in the sixth end and then stole two more points in the seventh when Latvia got their take-out angles wrong. Latvia conceded after this, giving United States their fourth win so far, at 10-3.

After the game, United States’ Chris Plys said, “We’re feeling good, starting to get a bit more of a hang on what’s going on out there. The jet lag has worn off which is nice. We know we’ve got two more games in the round robin so hopefully we can keep that going and hopefully get the bye to the semi-final.”

He continued, “We came here with the goal of winning it. Two more games now, we know we’ve got New Zealand and Korea left, and both of those teams can play, but we’re starting to think about the play-offs.”

Estonia started strongly in their game against Korea, scoring one point in the first end and stealing two points in the following two ends. This gave Estonia a 5-0 lead after three ends. However, in the fourth, when they called a power play, Korea’s Kim Minji had a straightforward draw to finally get her team on the score-board with four points that reduced Estonia’s lead to 5-4.

In the fifth end, it was Estonia’s turn to give up a steal of two and give Korea the lead for the first time in the game, at 6-5. In the sixth end, as they used their power play, Estonia’s final hit rolled too far but they still managed a score of one to level the game at 6-6.

Estonia then took the lead again in the seventh end, when Korea gave up another steal of two. In the eighth end, Kim Minji played a hit-and-stay to score two points, level the game at 8-8 and force an extra end. In that extra end, Estonia’s Harri Lill played last stone for his team, but his final draw did not curl enough, giving Korea a steal of two for a 10-8 win. This keeps Korea in joint top spot, unbeaten on four wins.

Japan faced a New Zealand team still looking for their first win in the third game of this session. It was New Zealand who started better, taking a 3-2 lead into the break. After this, scores of two in both the fifth and seventh ends gave Japan a 6-5 lead. In the eighth, New Zealand’s Mhairi-Bronte Duncan caught a guard with her final draw, giving Japan three points and a 9-5 win.

After the game, Tanida Yasumasa said, “Despite losing the steals we thought we were putting the stones in the right places so we told each other that as long as we continue to do that, we will get a chance back. We wanted to finish in the eighth end, so we tried to put the pressure on them.”

Finland sat out this session.