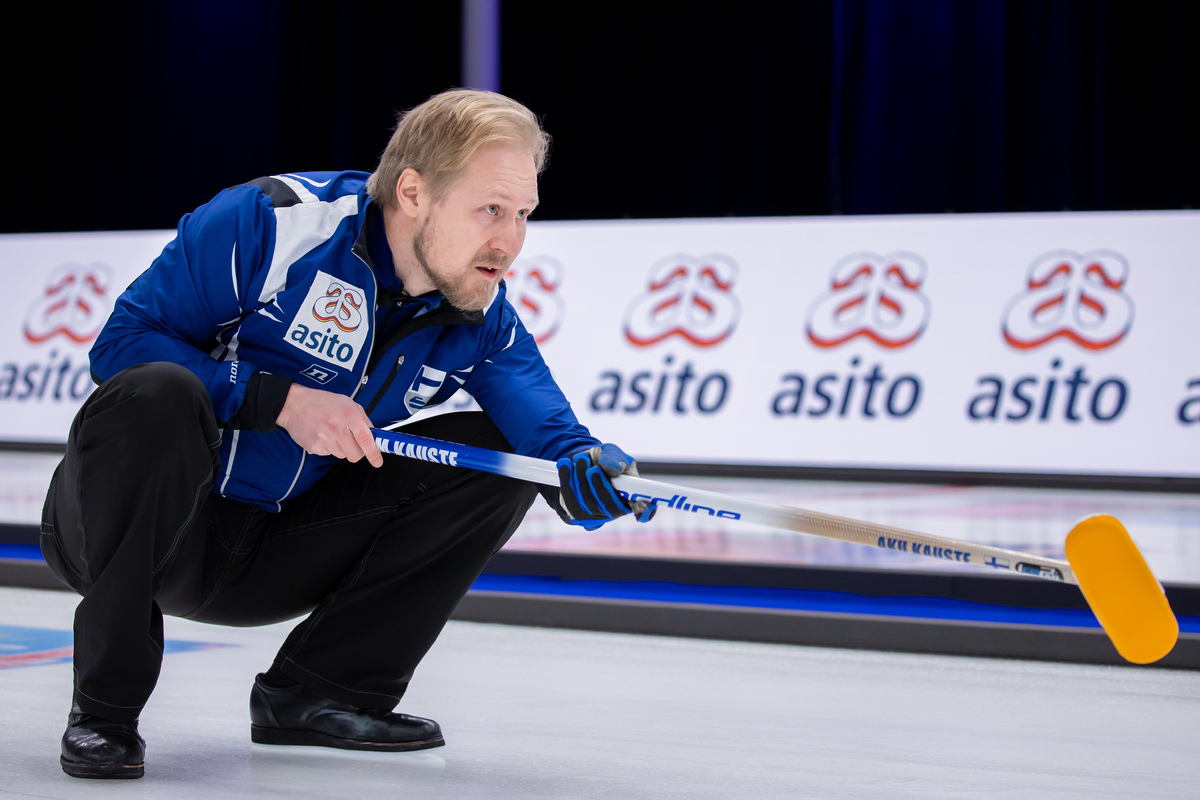 Korea and United States both had straightforward wins in Tuesday evening’s eleventh session of Mixed Doubles round-robin play at the OQE2021.

United States beat New Zealand by 9-3 in just six ends, while Korea survived a mid-game come-back by Latvia to win by 9-7. In the third game of this session Finland beat Estonia by 10-4 to keep their play-off hopes alive.

This was the second-last session for Group B teams and both Korea and United States had already qualified for the play-offs.

Now with identical records of five wins and no losses, they face each other in Wednesday’s last Group B session, with the winner going straight to the last qualifying game and the loser facing an extra challenge in a play-off semi-final.

Against New Zealand, United States gave up a steal of one in the first end, but, in the second, United States’ Vicky Persinger played a delicate tap-back and stay to score five points and give her team a 5-1 lead.

In the fourth end, with the score now at 5-2, Persinger played a draw for a further two points, moving United Sates’ lead to 7-2. The Americans went on to win by 9-3 in just six ends.

Afterwards, Vicky Persinger said, “We made some good ones early on and got them into some tough spots, forcing them into figuring it out for themselves. I thought we played well.”

Her partner Chris Plys added, “We took the positions they gave us, and we were able to clear a bunch of rocks out… I’m happy with the way we played there.”

Looking forward to the game against Korea, he said, “Sometimes it’s better to have that extra game and not be sitting around all day… what’ll be, will be.”

Against Latvia, Korea raced into an early lead. In the first end, Korea’s Kim Minji played a freeze onto one of her own stones to score three points.

Korea managed to steal two points in both the second and the third end, and was leading the game by 7-0 after three ends.

In the sixth end Latvia’s Daina Barone drew her last stone into the house and scored four points, reducing Korea’s lead to 8-6.

In the eighth end, Barone was wide with her final stone to give up a steal of one and lose the game by 7-9.

Estonia opened their game against Finland with a hit for one point in the first end, but, in the second, Finland’s Oona Kauste had a draw to score two points and take a 2-1 lead.

In the third end, Estonia’s Marie Kaldvee was short with her final draw to give Finland a steal of four points and a 6-1 lead.

Kauste added to Finland’s score in the sixth end when, having called a power play, she drew again, this time for three points and a 9-4 lead.

A steal of one point in the seventh end following an Estonian miss gave the Finns a 10-4 win.

They now face Japan, who sat out this session, in Wednesday’s final round-robin session, with the winner ready to grab the third qualifying slot form Group B.

After the game Aku Kauste said, “That was a scary game. In the first end they had a shot for three and they slightly missed it. We made some stupid calls in the last end, and they nearly had a shot to finish the game… my heart missed a few beats. It was really close.”

Looking forward, his sister Oona said, “We just need to win all the games, so we won’t think about that. We’ll just play our stones and make good positions and… win!”