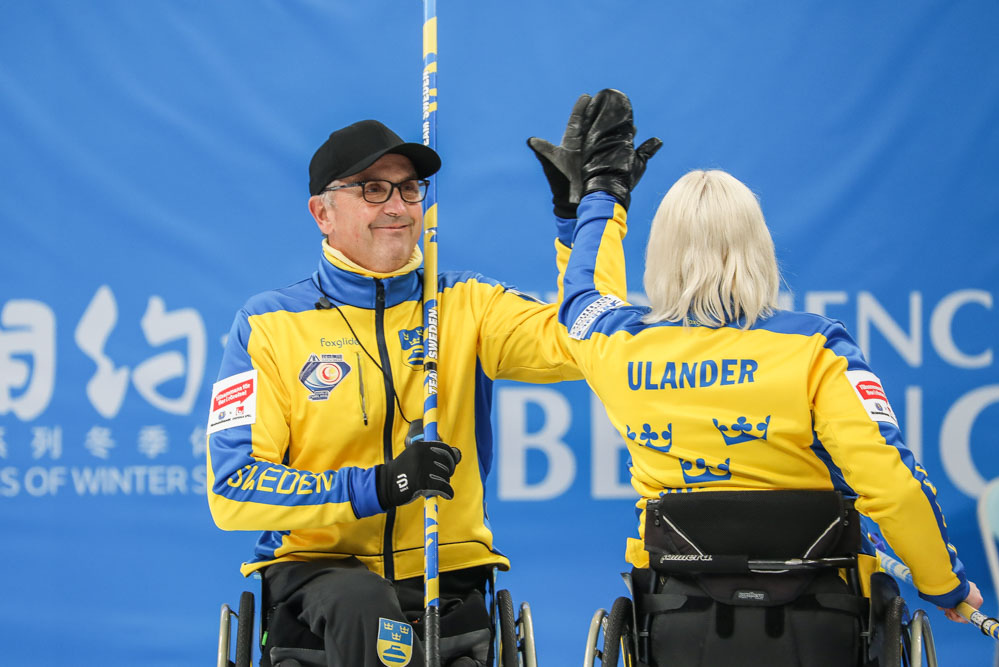 Canada capitalised on their last-stone advantage in the first end, putting two points on the board.

In the second end Norway replied with their own two points to level the game.

In the third end, Canada scored another two points, while in the fourth end, they forced Norway to take their single point. The teams went into the break with Canada leading, 4-3.

In the fifth end, Norway stole a single point, when Canada fourth player, Jon Thurston was slightly wide in his attempt to remove the lone Norwegian stone from the house, just pushing it further into the four-foot with his last shot.

In the seventh end Canada scored two points to take back the lead by 6-5. Then, in the last end, Norway secured two points, for their 7-6 victory.

After the game, Norway third player, Jostein Stordahl said “It was a high-pressure game from the start. We had some bad starts at this tournament, so we had to have a win. And they got two, we got two, they got two and we got one. So they had a lead 4-3 in the break. But we came back, steal, steal and we were on track and we felt very good with our stones. We had a great time on the ice. Two girls and two boys, we had a perfect time out there.”

Norway skip, Ole Fredrik Syversen added, “My last rock, I remember that it was perfect. They couldn’t hit it, so they had to make the freeze, so they could have gotten the extra end. And when they didn’t do that, we won the game. And that’s good for the team. So we are back on track.”

Both teams came into the game with a 3-2 win-loss record and were looking for their fourth win of the week.

Sweden started the game with a steal of two points in the first end, when Latvia fourth player, Agris Lasmans was unsuccessful in his take-out attempt with his last stone.

In the second end, Latvia scored a single point, then, in the third end, Latvia stole four points when Sweden skip, Vilho Petersson-Dahl tapped a Latvian stone into scoring position with his draw attempt on his last stone.

Latvia took a 5-3 lead into the break, then in the fifth end Latvia scored a single point to extend their lead.

In the sixth end Sweden scored four points due to their precise draw-game. In the seventh end, Sweden stole a single point to lead the game by 8-6 going into the eighth end. In the last end, they ran Latvia out of stones, making 8-6 the final result of the game.

Sweden skip and fourth player, Viljo Petersson-Dahl said “I think we had a good first end, and then we struggled with the ice and we didn’t get the broom, so it was hard in the beginning. And I think the further the match developed, we started to get the ice and we started to play better. But it was a tight game, we almost lost it. They played well.”

United States recorded their fifth win of the week and consigned Switzerland to their sixth loss in an extremely close game.

United States used their last-stone advantage in the first end, to score two points for the early lead only to have Switzerland respond with two points of their own in the second end to level the game.

A further two points in the third end, followed by a single point in the fifth end gave United States a 5-3 lead after five ends.

Then, in the sixth end, Switzerland took the lead for the only time in the game with a score of three points, though Swiss skip Eric Decorvet missed the opportunity for a fourth point from the end when his final stone draw attempt caught a high United States guard.

United States responded immediately with their own score of three points to retake the lead in the seventh end, when their skip Matthew Thums played an open draw to the button with his final stone.

United States then ran Switzerland out of stones in the eighth end to hold on for their 8-6 win.

After the game, United States lead player, Batoyun Uranchimeg said “We struggled a little bit, we weren’t as crisp as we wanted to be in our shot-making. But we pulled through it and I’m pretty happy with the result.

“We have a great camaraderie with each other and encourage each other. Whenever we make shots, even when we miss a shot, just the next person will tell the other ‘okay, pick it up, I got your back’. We basically try to pick each other up if someone misses a shot. And when somebody makes a great shot, we congratulate and just keep that energy going. So we’re all in a good mood and spirit to continue, no matter what’s happening on the ice. It’s fun, we’re here to have fun as well.”

Slovakia collecting second win of the week over Korea

Going into this session, both teams were looking for their second win of the championship.

Slovakia started the game better, scoring a single point in the first end and stealing single points in the following two ends. In the fourth end, Korea got on the board with a single point.

In the second half of the game, the teams exchanged single-point scores with hammer, which meant a 5-2 scoreline to Slovakia heading into the last end. In the last end, Slovakia ran Korea out of stones for the 5-2 win.