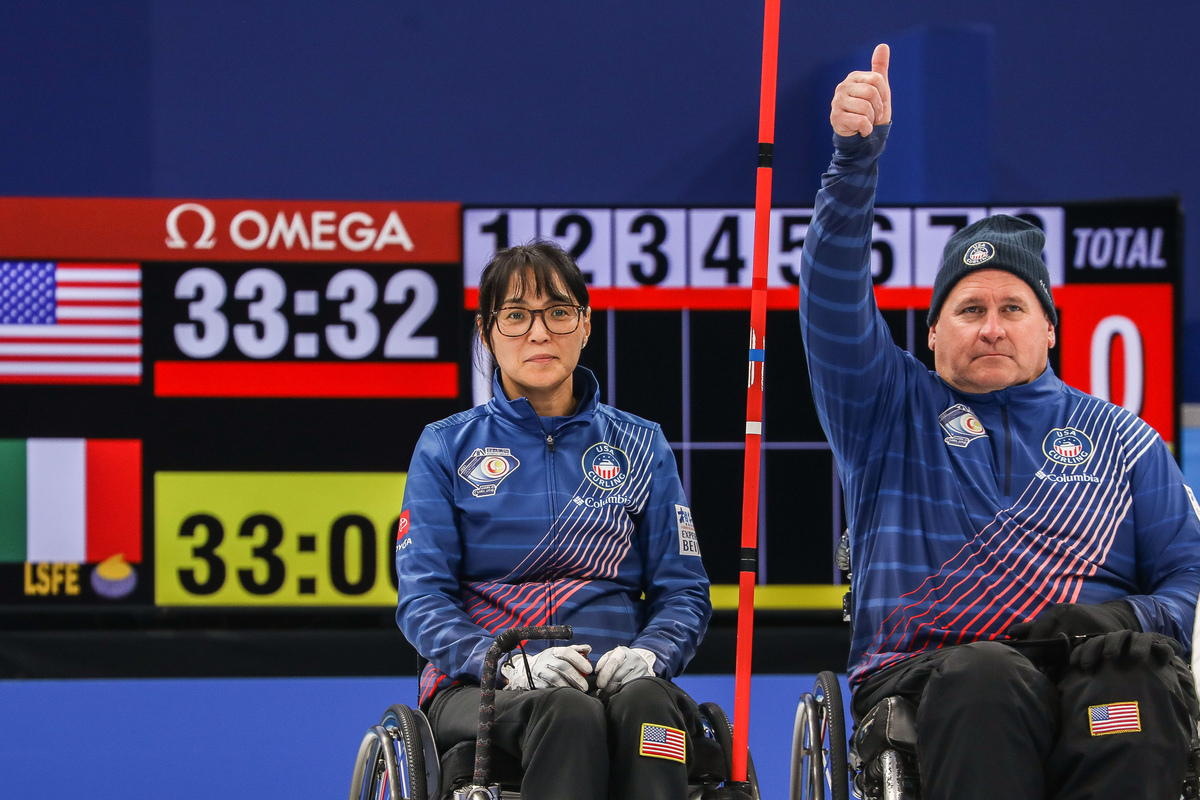 Italy scored the first point of the game in the first end, then stole two more in the second end, when United States skip and fourth player, Matthew Thums was unsuccessful on his draw attempt with his last stone.

In the third end, United States got on the board with two points, and Italy responded with a single point in the fourth end to take a 4-2 lead into the break.

Italy battled back in the seventh end, scored two points and levelled the game at six each, going into the last end.

In the eighth end, United States’ Thums was left with a difficult angle-raise to outscore the Italian stone sitting on the four-foot. He executed that perfectly, scoring the much-needed single point to win the game for United States, 7-6.

After the game, United States third player Stephen Emt said, “Great Italy team! We battle with them all the time, it came down obviously to the very last stone. We were down a little bit, we’re just finding our way to make things happen this week. We still haven’t played our A game, but we’re coming out with some victories where in years past we wouldn’t be in the game, we would been blown out, we’d been shaking in the sixth end.

“So it was an incredible game, it was up and down, rollercoaster, some great shots, not so great shots, on both sides. Just very-very proud of my team. Pleased to be here and having fun.”

After the first blank end, RCF stole a single point in the second end, when Sweden skip, Viljo Petersson-Dahl missed his promotion take-out attempt to remove an RCF stone sitting in the four-foot ring.

RCF stole another point in the third end when Petersson-Dahl rolled out with his last take-out attempt.

The fourth end was blanked, and the teams went into the break with RCF leading, 2-0.

Sweden also blanked the fifth end of the game, before getting on the board in the sixth end, with a score of two points to level the game.

RCF responded with a score of their own two points, going into the last end leading, 4-2.

In the last end, RCF filled the house with stones, forcing Petersson-Dahl to attempt a difficult take-out with his last stone. He was unable to manage the challenging shot, giving up a steal of four points and giving RCF the win, by 8-2.

Korea played in their second game of the day, this time facing hosts China. It was a tense beginning to the game with the teams being forced to single-point scores with hammer in the first two ends, before Korea took the advantage with a steal of one point in the third end.

A score of two points in the fourth end by China gave them a lead that they held onto for the remainder of the game.

With his final stone of the sixth end, Jung hit a Chinese stone in the 12-foot ring, causing it to roll to the edge of the four-foot, giving China another steal of three points. After which Korea conceded with the score 9-2 in favour of China.

After the game, China lead, Yan Zhuo said “During the first half of the game, I was a bit worried and a bit unfamiliar with the ice. But during the second half, I gradually found some stability and gradually got a better handle on the ice. We need to practice more and to learn about each other more in order to work better as a team in the future games.”

In this session Canada faced Scotland and were looking to secure their second win of the day. Scotland began the game with last stone advantage but were forced to a single point in the first end.

Canada then scored a single point in the second end when fourth player, Jon Thurston’s hit and roll attempt on the lone Scottish stone in the house caught onto the edge of the 12-foot ring.

In the third end, Scotland skip, Hugh Nibloe was left with an open draw for two points to take a 3-1 lead.

After forcing Canada to score another single point in the fourth end, Scotland extended their lead with another open draw for two points in the fifth end.

Canada were left with an open draw of their own in the sixth end for two points. In the seventh end Scotland’s Nibloe played a wide draw into the eight-foot for another two points and the 7-4 lead. Scotland then ran Canada out of stones in the eighth end for their third win of the week.