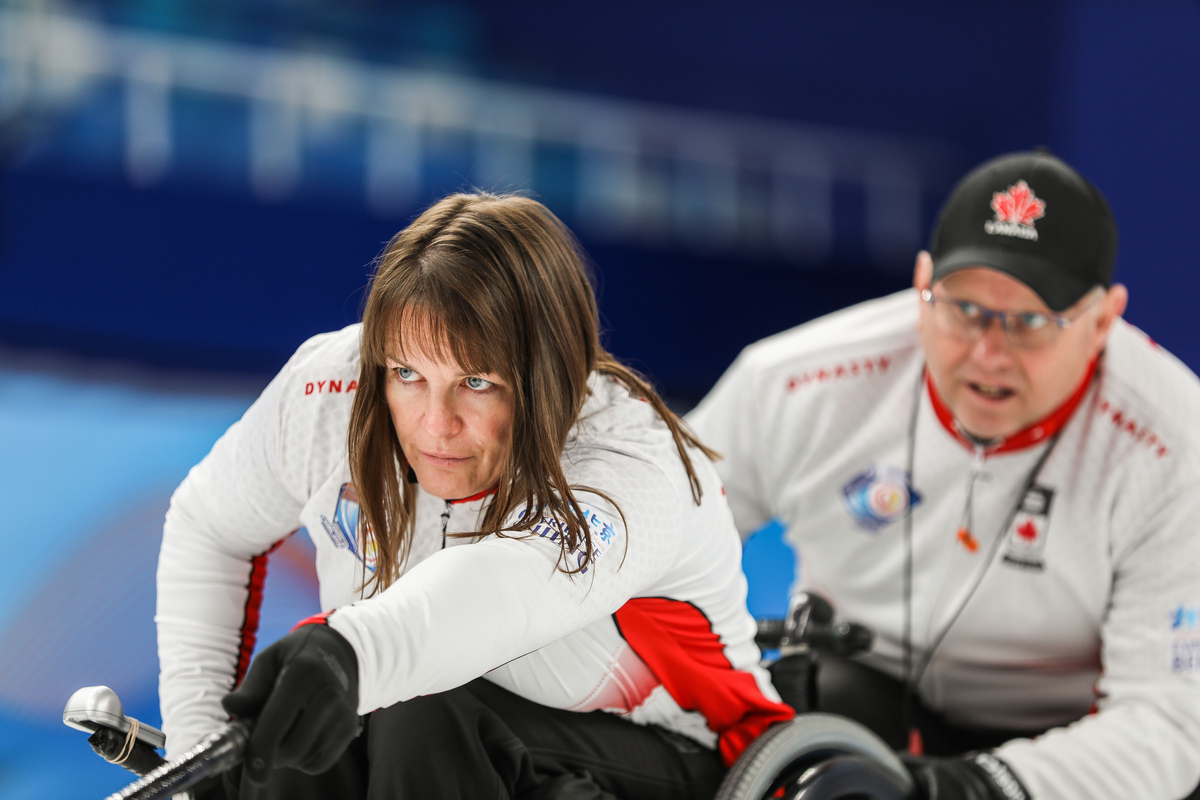 Day five of the Kuntai World Wheelchair World Championship 2021, taking place  in the Ice Cube in Beijing, China began with session 12 of the round robin and saw wins for Canada, China, RCF and Sweden.

After a two-loss day, Canada was looking to get back to winning ways when facing Korea in this session.

Canada started the game with a score of one point in the first end and added one more stolen point on the board in the second end.

In the fifth end, Canada stole a single point, when Korea skip and fourth player, Jang Jaehyuk was heavy with his last stone and was unable to get inside the Canadian counter on the back of the four-foot by his draw attempt.

In the sixth end, Jang Jaehyuk came up short with his last draw attempt, giving up a steal of three points, after which, Korea conceded defeat with the final score, 8-2, for Canada.

After the game, Canada skip Mark Ideson said “It was very much needed. Basically the theme of the week for us has been consistency and we’re trying to find that. You know, coming off lots of time off, we’re slowly improving and we’re trying to take advantage of the key moments in the games, which, some we’ve let slip away. So we’re just gonna keep working on that and keep working towards playing on the weekend.”

Sweden opened the scoring with a single point in the first end. In the next two ends, the teams traded two-point scores with last-stone advantage, making the score 3-2 in favour of Sweden after three ends. In the fourth end, United States scored a single point and tied the game going into the break.

In the fifth end, Sweden scored a single point. The turning point of the game came in the sixth end, when United States skip, Matthew Thums, was heavy with his last draw attempt facing three Swedish counters and gave up a steal of three points.

In the seventh end, United States could only score a single point. Then in the eighth end Sweden ran United States out of stones, for the 7-4 win.

After the game, Sweden skip, Viljo Petersson-Dahl said “I think we played well today. Better than the first game yesterday, so I’m satisfied. I think USA played very well as well, so it was a tight game. But we managed to get three points in one end and that’s the difference today.”

The current world champions, RCF, played against Scotland in this session.

RCF was first to score when they put a single point on the board in the first end. In the next two ends, the teams traded single points, then in the fourth end, RCF stole a single point for a 3-1 lead at the break.

Scotland played an exceptional fifth end, and scored three points to take the lead the first time in the game, 4-3.

RCF responded by scoring two points in the sixth end to take back the lead, 5-4.

In the seventh end, RCF kept putting stones in the house, and left Scotland skip, Hugh Nibloe facing three RCF counters before his last stone. His double take-out attempt didn’t work out, and Scotland gave up a steal of three points.

In the eighth end RCF ran Scotland out of stones, with the final score 8-4, to RCF.

In the last game of the session, the leader of the standings, China, played against Italy who were looking for their third win of the week.

China capitalised on the hammer in the first end, scoring a single point. In the second end, they stole two points when Italy fourth player, Egidio Marchese was unsuccessful with his take-out attempt.

In the third end, Italy scored a single point. Right before the break, China put together an exceptional end, and scored five points to take an 8-1 lead.

In the fifth end, China stole two more points to extend their lead to 10-1. Then, in the sixth end, Italy took a single point and conceded the game afterwards with the final score being 10-2 in China’s favour.