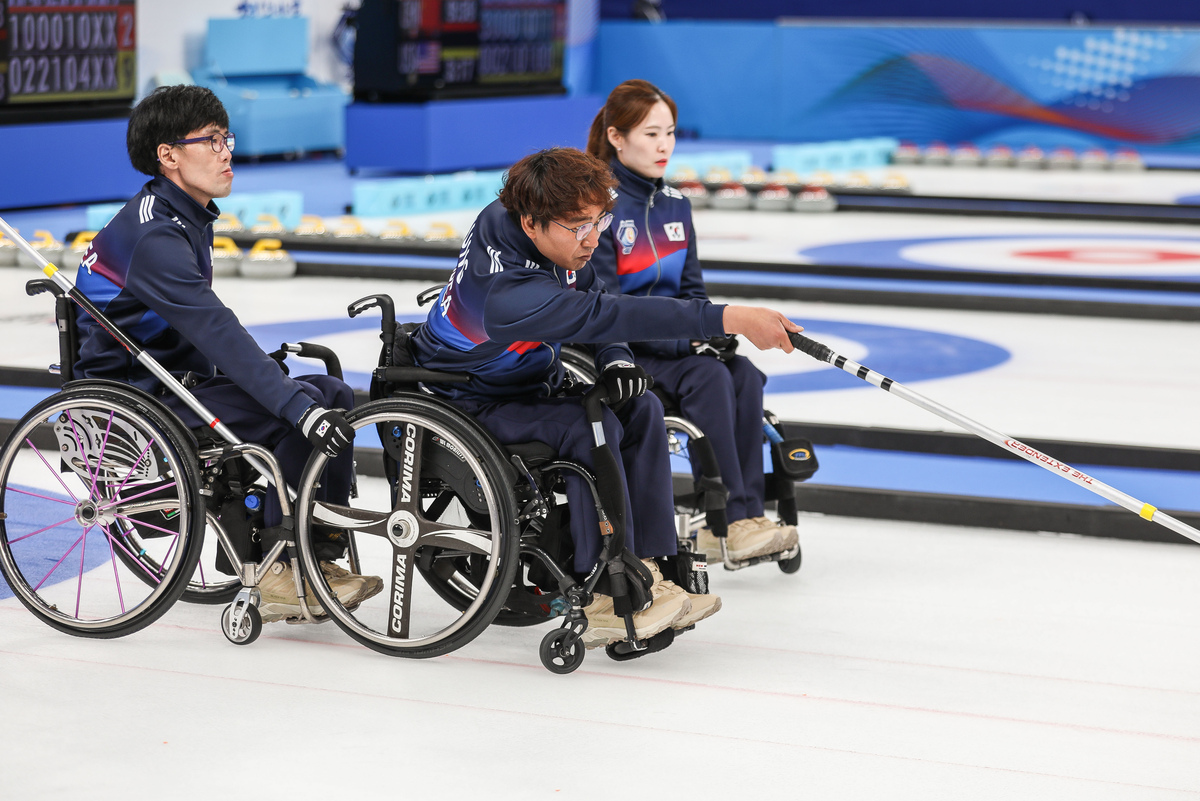 Korea faced Italy in this session with both sides looking to record their second win of the week and it took an extra end for that winner to be decided.

Italy applied pressure to Korea from the first end with Korea skip, Jang Jaehuk, facing three Italian counters when he threw his last stone. Jang’s take-out attempt cleared one of the Italian stones, but rolled wide to the edge of the 12-foot ring to give up a steal of two points. Italy then stole a single point in the second end.

A score of one point in the third end by Korea was followed by a steal of two points in the fourth end, when Italian fourth player, Egidio Marchese’s take-out attempt rolled wide after clearing a single Korean shot stone. Korea then stole a single point in the fifth end.

Korea, with last-stone advantage in the eighth end, were forced to take a single point and take the game to an extra end.

In that extra end, Marchese attempted a draw with his final stone with Korea sitting shot stone, but hit a guard with the attempt to give up a steal of one point and Korea the 6-5 win.

After the game, Korea lead Baek Hyejin said “We really wanted to win this game, also we did it in an extra end. We could win because in the extra end all our players guarded the second stone. I hope we can keep winning.”

In a repeat of last year’s final, RCF led Canada, 3-1, at the break after scoring two points in the fourth end when RCF skip Konstantin Kurokhtin was left with an open draw to the house with his last stone.

In the fifth end, when facing four RCF stones, Canadian fourth player, Jon Thurston rolled out after removing one of the RCF counters to give up a steal of three points.

Canada bounced back immediately in the sixth end, when Thurston’s raise take-out with his final stone gave Canada a score of four points. Then a single-point steal in the seventh end, levelled the score at 6-6.

In the eighth end, Thurston faced three RCF counters when he played his final stone. His attempted raise was unable to get into scoring position giving RCF the 9-6 win without having to throw their final stone.

After the game, RCF skip, Konstantin Kurokhtin said “Team Canada is a very good team, we know each other for so many years, we played many games together. Today both teams wanted to win, we were highly motivated. In the middle of the game, we had a momentum going, but couldn’t hold it till the end. So the end of the game became stressful and everything was decided by the last stones of both fourth players. We wish luck to Team Canada in their future games.”

China opened the game with a score of three points in the first end, then after blanking the second end, United States scored two points in the third end, then stole one point in the fourth end to go into the break level at 3-3.

The teams then traded single points for the next three ends. With United States trailing by one point in the eighth end, but having last-stone advantage they put themselves in a position to score two points for the win.

However, United States’ skip, Matthew Thums’ hit attempt with his final stone curled too much and pushed the China stone closer to the button to give up a steal of one point and give China the 6-4 victory to move into joint first place with RCF.

Scotland opened the scoring with a single point in the first end, then Sweden responded with two points of their own in the second end.

In the third end Sweden stole two points when Scotland skip, Hugh Nibloe was unsuccessful with his take-out attempt. Sweden stole another point in the fourth end, and the teams went into the break with Sweden leading by 5-1.

After the break, Scotland switched around their line-up and Gregor Ewan began throwing last stones, with Nibloe moving to third stones.

In the fifth end, Scotland scored a single point. However, Sweden played an exceptional sixth end that resulted in a four-point score, after which Scotland conceded defeat with a final score of 9-2, for Sweden.