First wins for Estonia and Norway in Helsingborg 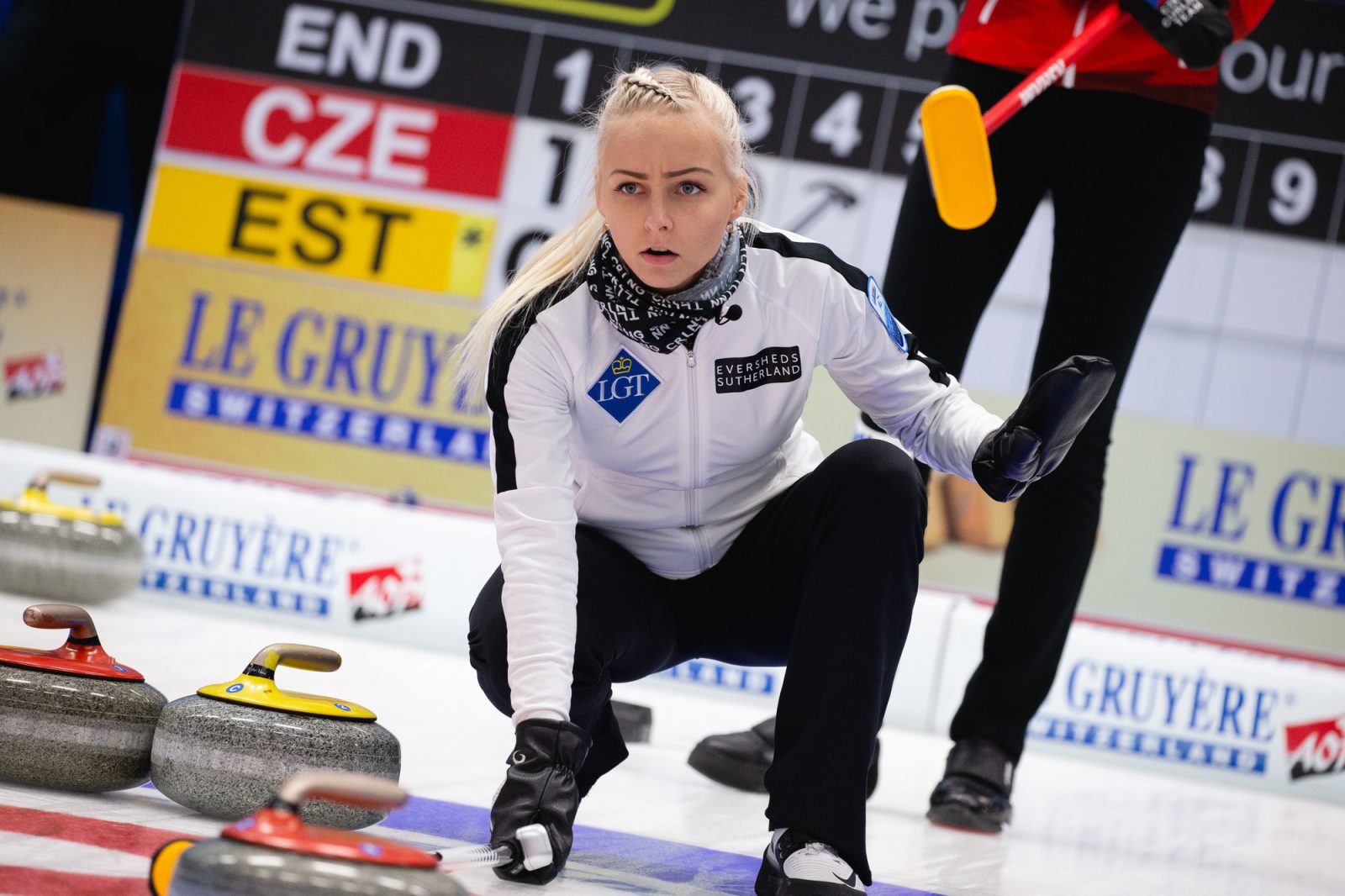 Home / News / First wins for Estonia and Norway in Helsingborg

There were first wins for Estonia and Norway in Sunday morning’s second session of women’s round-robin play – as well as a false-alarm fire alarm and venue evacuation during play at The Olympia Rink in Helsingborg, Sweden

Estonia beat Czech Republic by 6-5, while Norway had a 6-5 win over Latvia. The other winners in this session were Switzerland, who beat Sweden by 9-3; Russia, who were 7-5 winners over Germany; and Scotland, who had an extra end 7-6 win over Denmark.

Estonia faced Czech Republic in this morning session, still searching for their first win on their return to the A-Division.

The scores were level at 2-2 at the fifth end break, before Estonia took a 5-3 lead into the ninth end. In that ninth end, Czech Republic skip, Anna Kubeskova drew her last stone into the house to score two points and level the score at 5-5.

Then, in the tenth end, facing three counting Czech stones, Estonia skip, Marie Turmann drew her last stone inside all three to give her team the one point needed for their first win of the championship, by 6-5.

A delighted Turmann said afterwards, “It feels good, especially having a bad game yesterday.  I think we shook that off and just got to play our game today and show the good shots. We have seven more games to go now so we will keep at our best level now.”

Latvia faced Norway and this game, along with the game between Denmark and Scotland, was called off the ice before it could be completed because of a false-alarm fire alarm and venue evacuation.

After this, and a briefing involving all four teams and competition officials, to explain how the rules deal with such an incident (see the Rules of Curling, rule R12), the teams returned to complete the tenth end.

In that tenth end, Norway’s fourth player Kristin Skaslien drew through a hole to score one point and win by 6-5 for their first win of the week.

After the game, Norway’s skip Marianne Roervik said, “It was a really good game. We were a bit nervous, but we hung in there. That was a good win, we thought that we were really close against Scotland yesterday when we lost. We have Denmark tonight and we hope to have a good game against them as well. I hope we have a shot for the win.”

Tied at the top

In the seventh end of the tight game between Denmark and Scotland, the Danes led by 3-2 when Scotland skip, Eve Muirhead, played a raise take-out of a Danish stone to score two points and take a 4-3 lead.

This game went to an extra end, which was played after the fire-alarm evacuation. The Scots won by 7-6 when Muirhead scored the one point needed with a draw into the house for one point.

The game between world champions Switzerland and Olympic champions Sweden was a re-run of last year’s European final.

In the first end, Switzerland’s fourth player Alina Paetz hit a Swedish stone off the eight-foot ring to open the scoring with one point.

Later, in the seventh end, Paetz drew her last stone into the four-foot ring to score three points for a 9-3 lead.  Sweden then immediately conceded defeat.

Afterwards, Swiss skip Silvana Tirinzoni said, “It looked easier than it actually was. We were forced to make a few great shots and they didn’t play badly. We’re happy it only took seven ends – that’s unusual against this team.”

In the session’s final game Russia faced Germany, and in the fifth end, with Russia leading by 4-3, Germany’s skip Daniella Jentsch played a hit and roll to score two points and take the lead at 5-4.

This game went all the way to the last stone of the tenth end when Russia’s skip Alina Kovaleva played a hit on a German stone and then rolled into position to score one point and seal a 7-5 win that puts Russia into joint top spot on the rankings, alongside Switzerland and Scotland.