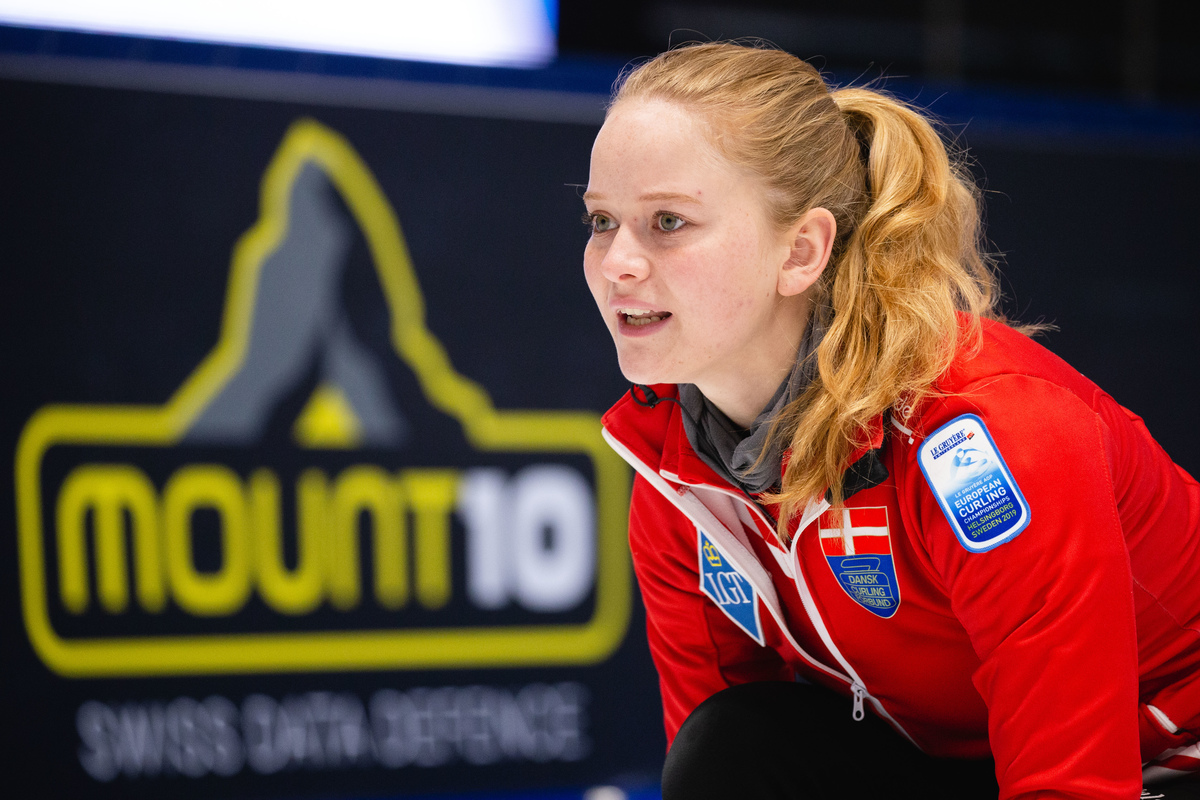 Both Denmark and Latvia women put a first win to their names after session three on Sunday night at the Olympia Rink in Helsingborg, Sweden.

Denmark beat Norway by 7-3 while Latvia won 10-9 after an extra end. In addition, Scotland and Switzerland remain the two unbeaten teams with three wins and zeros losses after wins against, Czech Republic and Russia respectfully.

Sweden picked up their second win of the competition, against Germany, 6-3.

Looking for their first victory, Denmark faced Norway. In the seventh end, Danish skip Mathilde Halse executed a perfect soft weight take-out, avoiding her stone on the four-foot ring to score three points to go up 5-3. Denmark capped the game with steals in both the eighth and ninth ends and went on to win their first game of the championship, 7-3.

“I don’t think much changed from the other games because we played well against Sweden and Scotland but they’re just really experienced curlers. Really hats off to those guys because they are just so good,” said Halse.

“But against Norway we just had kind of an advantage because we played up to our standards and I guess they struggled a little. We played really good and my teammates did really well and I made some key shots. They had a chance for three and I made a double take-out so we had some good shots.”

After a back and forth battle against Latvia, Estonia skip Marie Turman attempted an angle raise take-out for the win in the extra end, but her stone didn’t curl enough, giving Latvia the stolen point and their first win, 10-9.

“We wished to win this game but in the first end we lost three which wasn’t that good. Then it was very up and down but we kept on going and made ourselves believe in ourselves and that’s how I think we were able to win this game,” said Iveta Stasa-Sarsune, skip of Latvia.

Undefeated Switzerland, skipped by Silvana Tirinzoni, played Russia’s Alina Kovaleva. In the fifth end, Kovaleva drew her final stone perfectly to the button to score a single point to go down 2-3. The game took a turn in the ninth end when fourth stone thrower, Alina Paetz, made a draw for two points, and Russia conceded, 7-3.

“My three hundredth game representing my country makes me feel quite old but to get a win makes it I guess a little bit more special. It’s a very special thing to represent your country and have 300 caps,” said Muirhead.

After a steal of two points in the eighth end, Muirhead then drew her final stone to the button forcing Kubeskova to settle for one point in the ninth end. Scotland won 8-5 to stay undefeated alongside Switzerland.

With upcoming games against Olympic champions, Sweden, and world champions, Switzerland, Muirhead acknowledged the big day ahead of her team tomorrow.

“Definitely not thinking too far ahead, we know we have some very tough games to come,” said Muirhead.

“Tomorrow is going to be a very tough day but I think we can take a lot of credit for the last three games, we’ve played some good curling and we need to take that into tomorrow. It’s going to be a tough game but of course we’re going to give it our all.”