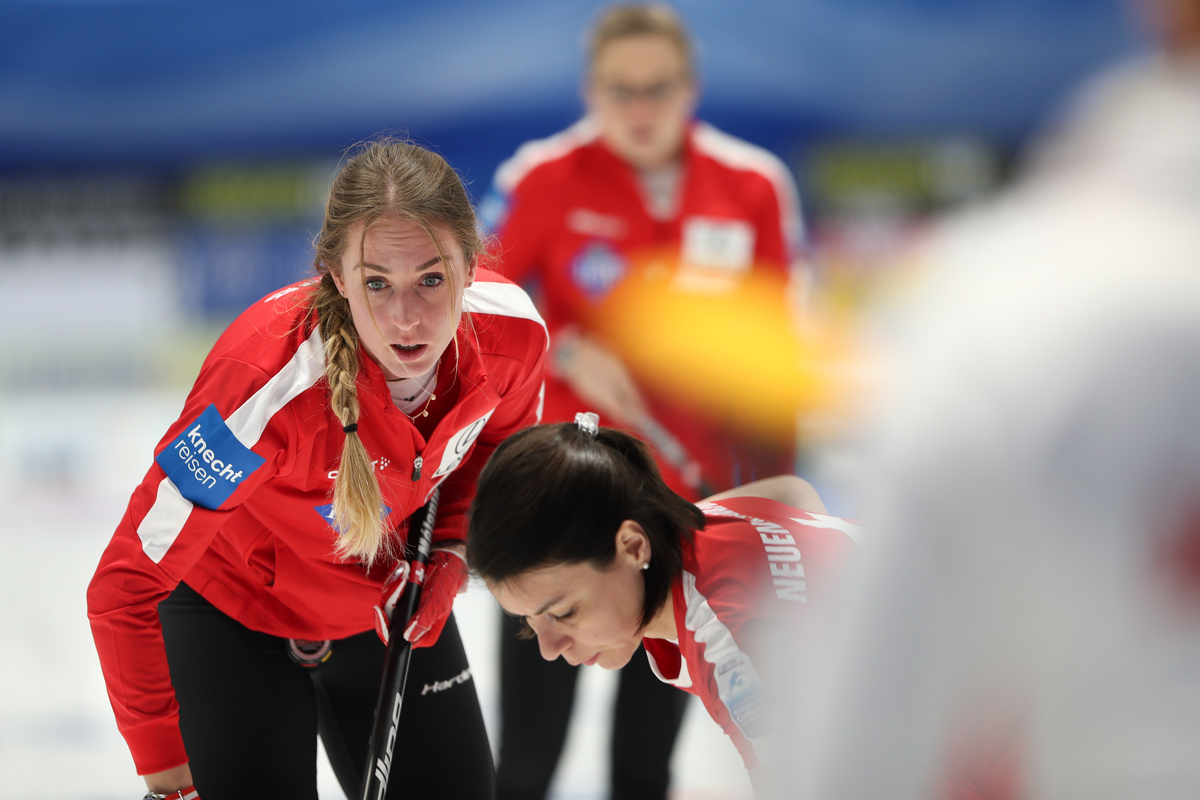 After Tuesday afternoon’s sixth women’s round-robin session, it remains crowded at the top of the table, with all four joint leaders – Russia, Scotland, Sweden and Switzerland – picking up their fifth wins.

Russia were 8-5 winners over Latvia; Scotland beat Germany by 10-5; Olympic champions Sweden defeated Estonia by 7-3; and Switzerland overcame Denmark by 6-4. Czech Republic were the other winners in this session, beating Norway by 6-5.

Against Latvia, Russia opened the scoring with a single point in the first end and they added to that when Latvia skip Iveta Stasa-Sarsune came up short with her draw to give Russia a steal of two points and a 3-0 lead. Further scores of two in the sixth and eighth ends helped Russia on the way to an 8-5 win.

Scotland had to come from behind against Germany when in the fourth end their skip Eve Muirhead drew her final stone into the house to score three points and move to a 4-3 lead. In the eighth end, although Muirhead’s final draw was a little heavy, they collected three points after an umpire’s measure, to win by 10-5.

After this game, Muirhead said, “that was a really solid game by all of us. We came out pretty sharp today. We’re over halfway now and to be sitting joint top is good.”

After blanking the first end in the game against Estonia, Sweden’s skip Anna Hasselborg played a split-raise at the front of the house to open the scoring with three points in the second end. Later, in the sixth, Hasselborg added another two points with an open hit to move into a 6-2 lead. Sweden eventually won by 7-3.

Switzerland were 3-1 up in the fourth end against Denmark when Denmark skip Mathilde Halse drew her final stone onto the button to score two points and level the score at 3-3. In the seventh end, Halse was just too thin with a take-out attempt to hand Switzerland a single-point steal for a 5-3 lead. The teams swapped singles in the eighth and ninth ends before Denmark ran out of stones in the tenth, giving Switzerland a 6-4 win.

After the game, Switzerland skip Silvana Tirinzoni said, “it was a close game, but I was never really afraid that we were going to lose. They played well, we didn’t expect them to miss – they kept the game close and forced us to play very well.”

Czech Republic faced Norway, and, in the sixth end, Czech Republic skip Anna Kubeskova, already with a 3-2 lead, played a nose-hit on a Norway stone to score two and extend her team’s lead to 5-2.  In the tenth, Kubeskova took out the one Norwegian stone she needed to remove and although Norway stole one point, the Czechs had a 6-5 win.

Afterwards, Kubeskova said, “we were definitely nervous. Both teams could’ve won the game. It was just about a few shots difference. Going into the second half of the championship it’s always good to start with a win.”