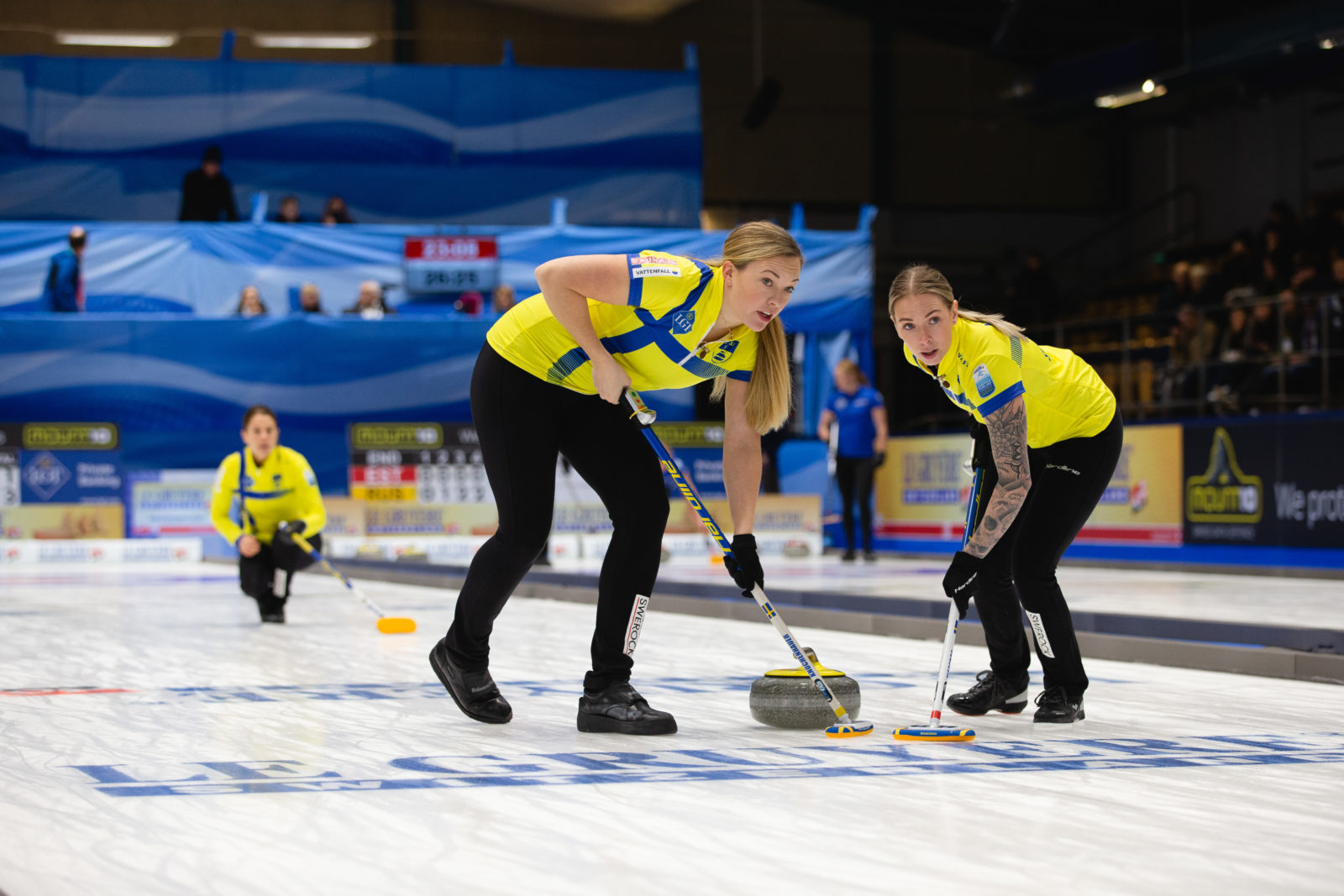 Other winners in this session were Russia, who beat Estonia 7-1; Scotland, with a 7-4 win over Norway; world champions Switzerland who emerged as 6-5 victors over Germany; and Czech Republic, who beat Latvia 8-2.

After blanking the first end against Germany, Sweden’s Hasselborg put her mark on the game in the second end when she hit out a Danish stone to open the scoring with three points. Sweden then went on to win by 6-3, helped by a further score of two points in the fifth end.

Afterwards, Hasselborg said, “That was a really good first game of the championship, it was fun to get started. This is our first championship in Sweden, and we have been looking forward to this a lot.”

Estonia had gained promotion from last year’s B-Division, and they faced Russia in their opener.

In the eighth end of this game, Russia’s skip Alena Kovaleva scored one point for a hit and stay to move onto a 7-1 lead, and at this point Estonia conceded defeat.

Later, Russia skip Alina Kovaleva said, “Of course, it’s always very good to start with a win, and the way we did it made it better. I’m happy with the team’s performance. Reading the ice was difficult at the start but later it was ok, and we had no problems.”

Scotland faced Norway in this session and in the third end of this game, Norway’s skip Kristin Skaslien drew her final stone into position to score one point, for a 2-1 lead.

In the fifth end, Scotland’s skip Eve Muirhead played a soft tap-out of a Norwegian stone to score one point to reduce Norway’s lead to 3-2. Scotland went on to win by 7-4.

Speaking afterwards, Scotland’s Muirhead said, “The second part of the game was a lot stronger than the first. We weren’t making the bread-and-butter shots, but we came onto a pretty good game in the second half so obviously the coach’s patter at halftime must have done a little bit for us.”

Switzerland’s world champions were up against Germany in this session and, in the third end of this game, Switzerland’s fourth player Alina Paetz played a long run-back take-out to score two points and take a 3-1 lead.

Germany responded straightaway in the fourth end when their skip Daniela Jentsch hit a Swiss stone off the button to score two points and tie the score at 3-3. Despite this, Switzerland went on to win a tight game, by 6-5, after scoring two points in the tenth end.

Switzerland’s skip Silvana Tirinzoni plays third stones for her team and afterwards, she said, “That was a good start against a very good team, and that made us focus from the beginning which was a good thing. We had some tough shots and that will help us in the next few games.”

In the fifth game of this session, Czech Republic faced Latvia and the Czechs took the lead in the second end when their skip Anna Kubeskova drew her final stone into position to tap back a Latvia stone and score two points for a 2-1 advantage.  After stealing single points in four ends throughout the game, Czech Republic went on to win by 8-2.

Women’s standings after session one