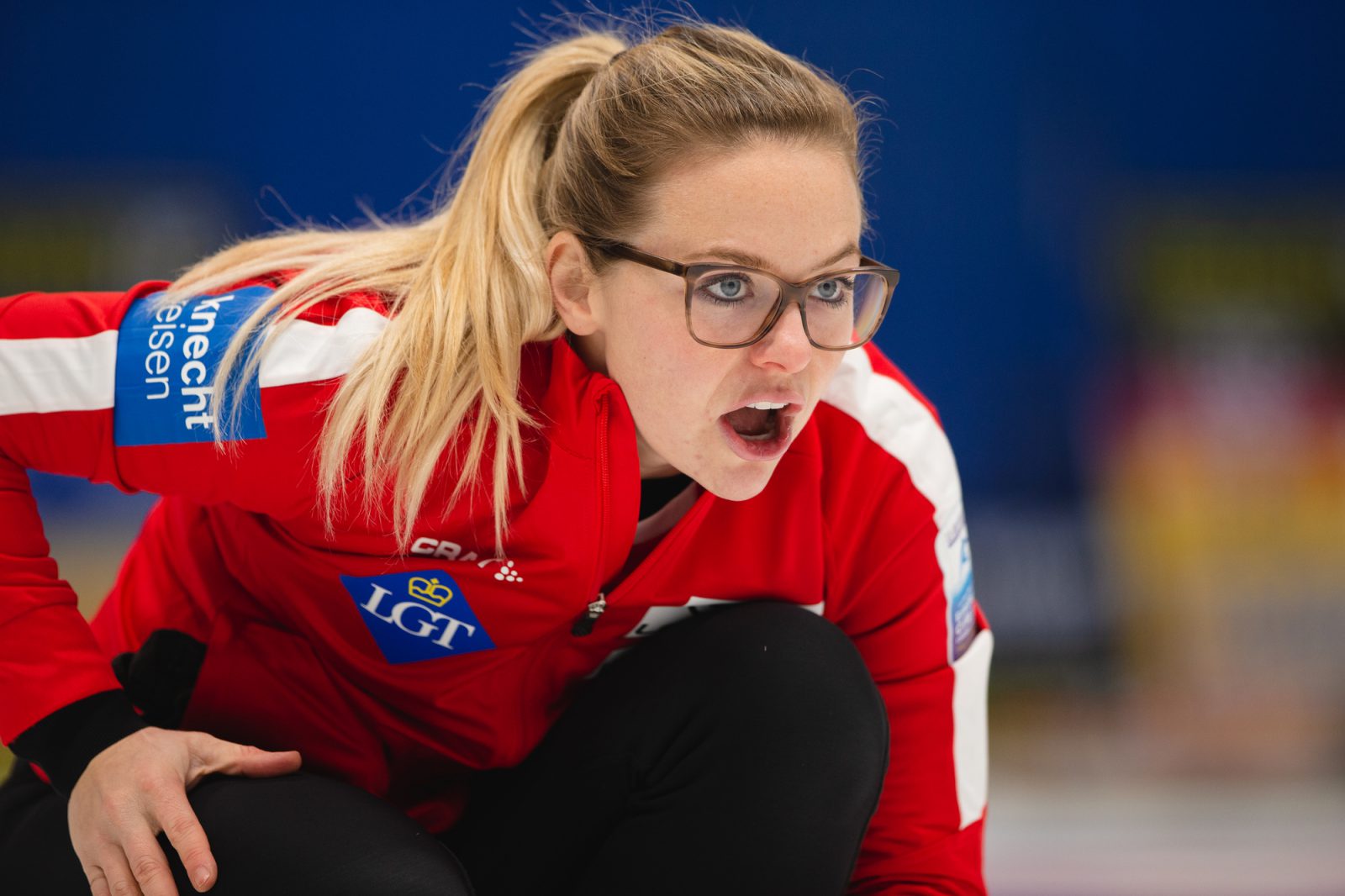 With a 10-7 win over Czech Republic in Thursday (20 November) evening’s eighth and second-last women’s round-robin session, Switzerland added to previous wins over fellow joint leaders Russia and Sweden, made themselves favourites to finish the round-robin at the top of the table.

Switzerland suffered a delay to their game, due to a traffic jam on the way to the venue, then a set-back of four points in the fourth end, when Czech Republic skip, Anna Kubeskova, played a gentle tap out on a Swiss stone to score four points and take a 5-4 lead.

However, a steal of two points in the ninth end played a major part in this win for Switzerland.

Afterwards, Swiss skip Silvana Tirinzoni said, “That was a very special win. We were stuck in a traffic jam and thought we weren’t going to make it. It was stressful and it felt like we never really came into the game. I’m just glad that the team kept battling. We are aware that we can finish at the top, but we’re also aware that we will have to play better tomorrow to finish first.

Hosts Sweden played Norway in this session, and in the third end, with Norway 2-0 up, Sweden skip Anna Hasselborg moved a collection of stones with an angle raise-shot to score three points and take the lead at 3-2.

Later Norway’s fourth player Kristen Skaslien played a draw into the house to score two points and level the score at 5-5. However, Sweden, already qualified for the semi-finals, went on to win by 9-6.

Scotland faced Russia and in the first end, Scotland skip Eve Muirhead played a draw to the button to open the scoring with a score of two points.

Later, in the fourth end it was the turn of Russia skip Alina Kovaleva to draw right onto the button and she scored three points with this stone, to level the score at 3-3. Russia went on to win the game by 10-5, helped by a steal of three points in the ninth end.

Looking to the worlds

Germany faced Latvia in this session and, in the seventh end, with Germany leading by 8-4 their skip Daniela Jentsch played a draw, looking to score four points. But she was heavy with her effort and had to settle for just three points instead.

Another score of three points by Germany in the seventh end gave them the win by 11-4 that qualifies them for the world championship in March.

After her team’s win, Jentsch said, “It’s great that we’ve got a place in the worlds line-up.  We knew our schedule here would be very tough and we didn’t quite manage to get to the semis, but we’re happy because we’ve gotten the most out of the situation now.”

Estonia faced Denmark and in the fifth end Estonia skip Marie Turmann had a straightforward draw to score three points and extend her team’s lead to 8-3.

Denmark responded in the next end when their skip Mathilde Halse scored one point with a draw into the house to reduce Estonia’s lead to 5-3.

Estonia went on to win by 9-4, a result that could save them from being relegated to next year’s B-Division.

Speaking after the game, Turmann said, “that win will help us stay in the A-Division, it’s one step closer. It feels good to pull out a win after losing so many tight games. It has been great here, a good experience, and we’re all enjoying it.”