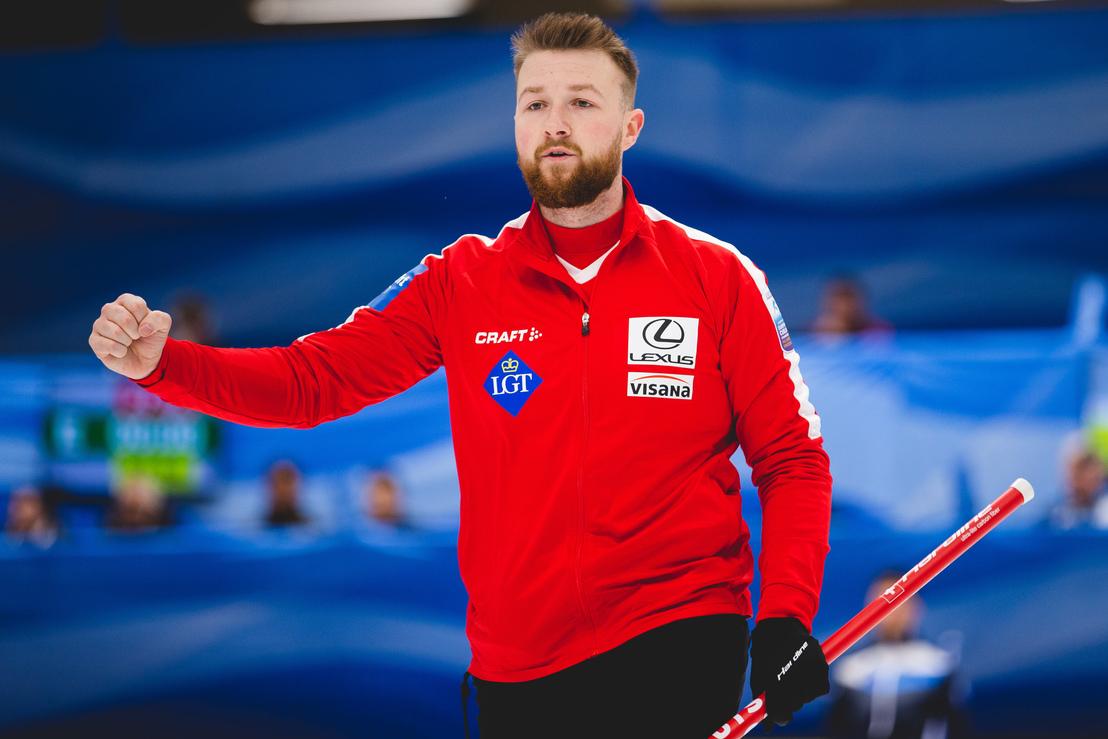 Monday afternoon’s fourth men’s round robin session featured three games that went to extra ends. This includes Switzerland’s 8-7 win over England which keeps the Swiss at the head of the chasing pack behind unbeaten leaders Sweden, who had a 10-3 win over Netherlands in this session.

Other extra end winners were Italy, who beat Norway by 8-7, and Denmark, who were 6-5 winners over Scotland. In the fifth game of the session, Germany beat Russia by 11-7.

Switzerland were in control of the game against England, leading by 6-2 until in the sixth end, when England’s skip Andrew Reed was able to draw for three points and reduce Switzerland’s lead to 6-5.   Switzerland had a chance to win in the tenth end, but their skip Yannick Schwaller was heavy with his draw, giving England a single steal for 7-7 and forcing the extra end. In that end, Switzerland got the one point needed for their 8-7 win.

Afterwards, Schwaller said, “there are no easy games, especially when you make it tough on yourselves. A win is a win and you should celebrate every win. It’s our first Europeans and we’re sitting on four and one.”

Scotland played Denmark in this session and this game also went to an extra end. There was never more than one-point difference in the game and when the Scots could only take one point from the tenth, the scores were tied at 5-5 and an extra end beckoned. Denmark then made a raise take-out for one point to secure their second win of the championships, 6-5.

Afterwards, Danish skip Mikkel Krause said, “it’s an awesome feeling to beat Scotland. No one expected us to win, not even ourselves. We expected Scotland to be a top three team. To beat them gives us hope for the rest of the tournament.”

Italy against Norway was the third game that went to an extra end, and in that end, Italy skip Joel Retornaz played a perfectly-judged draw inside two Norwegian counters to score one and win by 8-7.

Sweden played Netherlands in this session and scores of two in each of the first, fourth and seventh ends, as well as a three in the third, were enough to give them a 10-3 win in just seven ends. This victory keeps them at the top of the table on five wins and no losses.

Germany had big scores to win their game against Russia – a score of three in the third end, a steal of two in the fourth and a further steal of four in the ninth all contributed to their 11-7 victory.

Later, German skip Marc Muskatewitz said, “We blanked the seventh to make two in the eighth and make it a bit easier for us to maybe score two in the tenth, but we never planned to steal four in the ninth.”

This win means that Germany join Italy and Scotland in joint third place, on three wins and two losses.