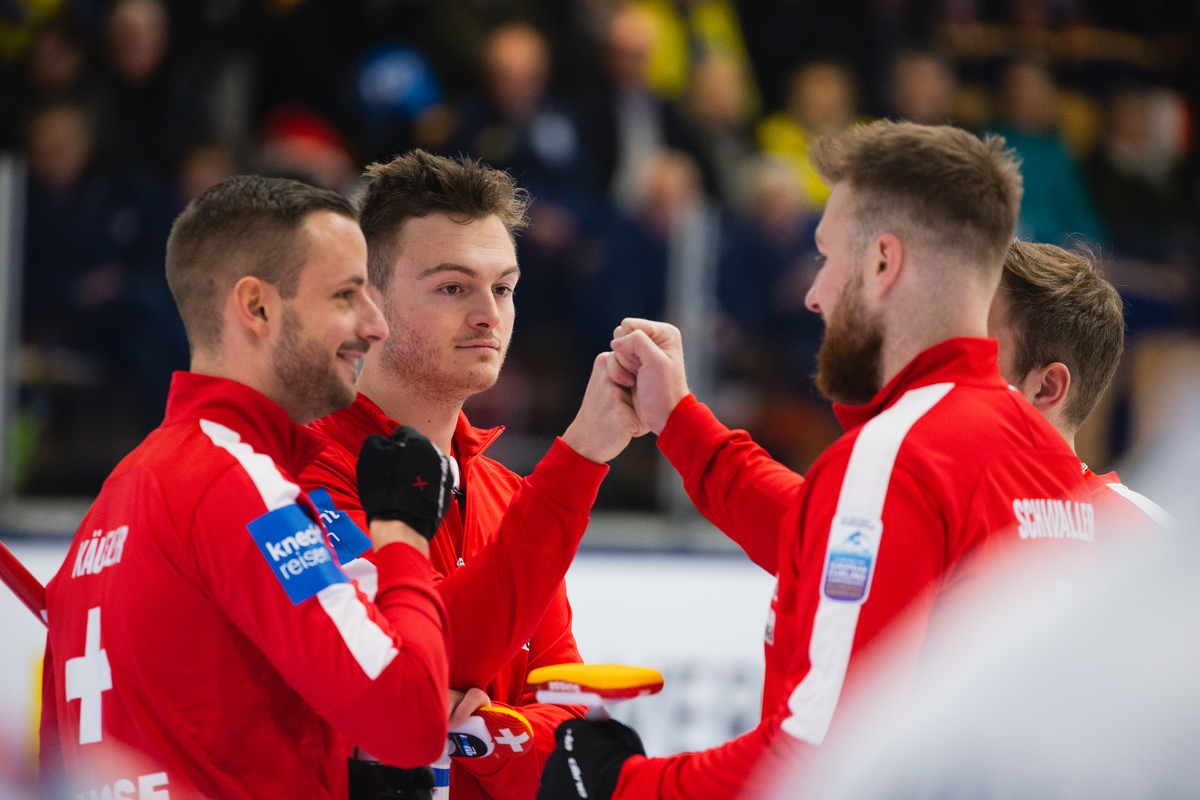 After Wednesday afternoon’s second-last men’s round-robin session, six teams – Italy, Scotland and Switzerland, as well as Denmark, Germany and Norway are still battling for three of the semi-final slots, to join unbeaten leaders Sweden, who had a 10-5 win over Germany in this session.

Switzerland beat Scotland by 8-3, while Italy had an extra end win by 7-6 over Netherlands, Denmark beat England, 8-4, and Norway were 6-5 winners over Russia.

Down to the wire

Scotland held an early lead against Switzerland but, in the fourth end Switzerland skip Yannick Schwaller played a raise to score two points and tie the score at 2-2. Switzerland never lost the lead after that and a score of four in the tenth gave them an 8-3 win.  Afterwards, Schwaller said, “[that win] was obviously very important when you look at the standings. They came out strong and we just tried to stay in the game and waited for our chances. We just want to make the play-offs, tomorrow is an important game against Italy and from there we will see what’s possible.”

Italy’s game against Netherlands came down to an extra end. With the last stone of the game, Italy’s skip Joel Retornaz calmly drew into the eight-foot to score the one point and sealed his team’s 7-6 win. Afterwards, Retornaz said, “We’re proud of the win and we’re happy and hanging on there.  That [extra end] shot is what the skip is supposed to do. That was nothing more – my team expects that from me.”

Russia went 4-1 up after four ends in their game against Norway but Norway levelled the game at 4-4 by the sixth end, following up a score of two with a single-point steal. Another steal of one in the ninth end was crucial for Norway as they went on to win by 6-5.

This win keeps Norway’s hopes of reaching the semi-finals alive and skip Thomas Ulsrud said, “we’re still fighting. Right now, we need some help from some other friends but as long as we win, we still have a chance.”

Denmark faced England in this session, with both teams trying to avoid relegation into next year’s B-Division. In the seventh end, with the score tied at 4-4, Denmark skip Mikkel Krause drew his final stone into the house to score two points and take a 6-4 lead. Denmark went on to win by 8-4, a result that ensures that they stay in the A-Division next year and qualify for this season’s world championship.

Afterwards their skip Mikkel Krause said, “it’s amazing. To have the chance to be here next year and also to go to the world’s – that’s a huge achievement for curling in Denmark at the moment.”