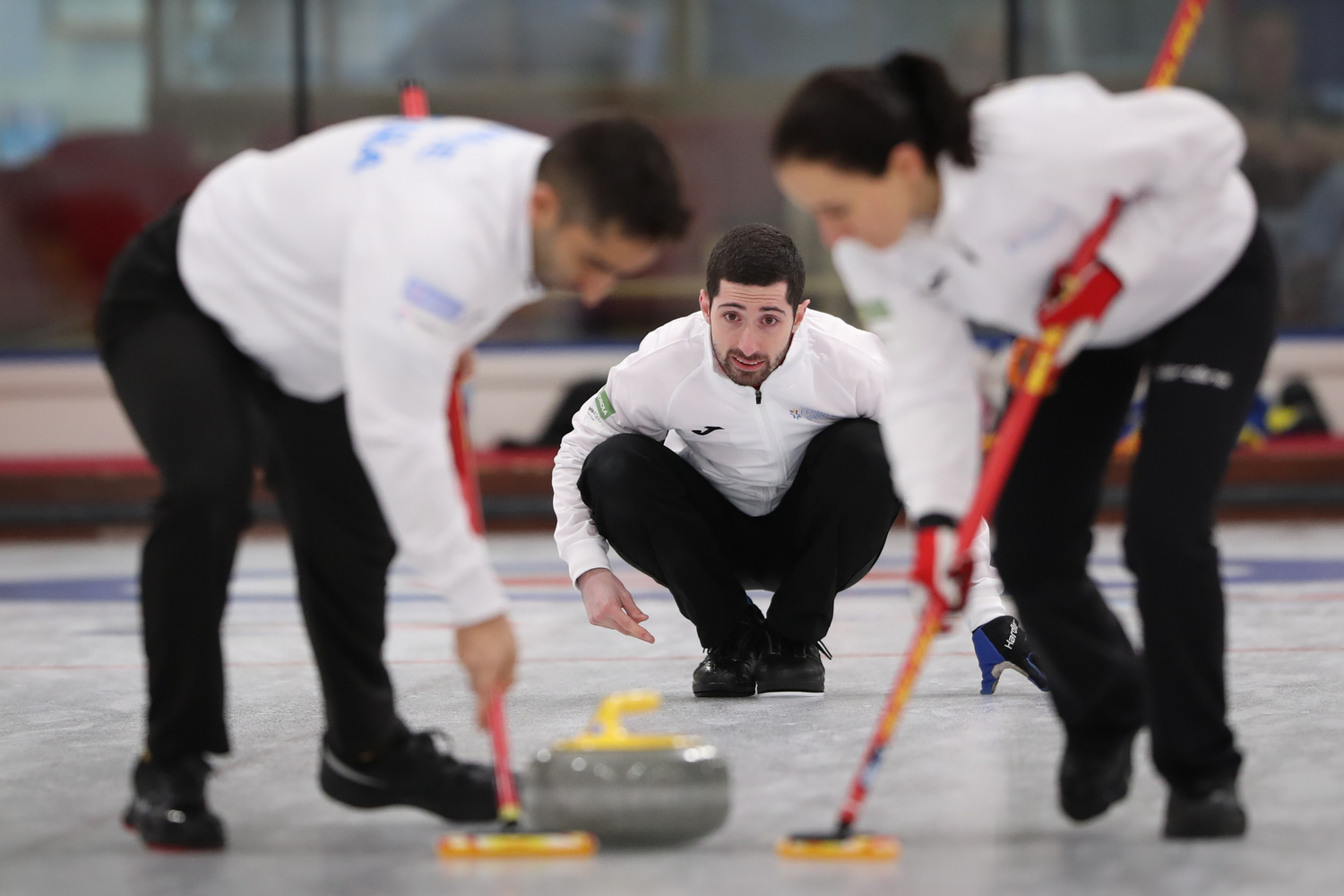 A delighted, Kosovo skip, Peter Anderson said afterwards, “It’s pretty amazing. It’s really nice to get that out of the way because it’s been haunting us the last little while, getting that first historic win, but I’m really proud of the team.” adding “I really hope we can keep it going.”

Canada moved to the top of the group as the only unbeaten side after their 5-2 win over Belarus. Canada opened the scoring with a single point in the first end, then stole single points in the next three ends on the way to their win.

Germany defeated Slovakia, 10-3, in six ends for their first win of the week. Skip, Andy Kapp said afterwards, “It was good but a little bit of a slow start this morning. But we came back with a five ender which was really good. We’re pretty satisfied.” then added “now we want to keep the momentum going.”

Hong Kong picked up their first win of the week in this session by defeating Estonia 6-4.

All eight Group B teams took to the ice on Sunday morning’s early session, and saw Denmark and Wales record their first wins.

Wales defeated Croatia 8-6 in a game they controlled throughout. Wales took a 5-1 lead into the fourth end break, but gave up that lead in the fifth end, when Croatia scored five points to go 6-5 ahead.

Wales skip, Adrian Meikle said about that fifth end, “We ended up building up a couple of stones in front of the house that we didn’t really want, being four shots in front, then we tried to draw behind them ourselves. We kept missing and they kept making theirs.” He continued, “Other than that end we felt in control.”

Wales recovered with a single point score in the sixth end to tie the scores, then stole two points in the seventh end to seal their first win.

In the final Group B game, Czech Republic defeated Andorra 11-1

New Zealand picked up their first win in Sunday’s evening session when they defeated Andorra, 9-2 in six ends.

New Zealand opened the scoring with a single point steal in the first end, then stole two points in the second end, then four points in the third end, on their way to a 9-2 win.

Afterwards, New Zealand skip, Thivya Jeyaranjan said, “The whole team played great tonight and finally getting a win on the board felt good.” Talking about their approach in this game she said, “We just tried to focus on the basics and work on our communication. I think that approach paid off. It definitely helped with the team’s confidence and hopefully we’ll carry that forward.”

Poland bounced back from their morning defeat to Denmark with a 15-1 win over Croatia in the evening session. After opening the scoring with four points in the first end, Poland scored five more points in the third end then stole six points over the next three ends after which Croatia conceded.

Poland skip, Bartosz Dzikowski said afterwards, “It was important to get that win. This morning’s game was a bit up and down for both teams, but the Danish team was just a bit better in the end. We drew some positives from that game and certainly played better in this one, so we’re happy we won.”

The evening session also saw Czech Republic defeat Norway 9-4 for their third win of the week to leave them unbeaten alone at the top of the table.

The final Group B game in the evening session saw Denmark win their second game of the day, defeating Wales, 14-1.

Spanish skip, Sergio Vez reflected on their competition so far: “We knew we had two of the toughest teams [in Group C] at the beginning of the draw. We’ve played strong. We’ve played like we played last year.”

Sweden blanked the opening two ends before Spain stole a single point in the third end. Sweden scored a single point of their own to tie the score at 1-1 going into the break.

“We waited for the chances we were going to have through the game. We struggled at the beginning but managed to leave the score tied [at the break]” said Vez “then we had our chances at the end and we took them.”

The teams traded two-point scores over the next three ends, before Spain ran Sweden out of stones in the eighth end for the 5-3 win.

United States got their first win of the week, defeating Brazil 12-2.

“That was a strong game. We were making lots of shots and felt comfortable with the ice. The ice changed a lot since our last game, but we felt really comfortable with it. We were playing well and we were really taking it to them. It felt good out there and it felt like we could make anything.” said United States skip, Hunter Clawson afterwards.

United States took control in the first half of the game, stealing ten points over the first four ends. A further score of two points in the sixth end was enough for Brazil to concede.

The two remaining Group C games took place in the day’s second session and saw Hungary win their second game, while Australia recorded their first win of the week.

Hungary remain unbeaten in the group after their 9-4 victory over Kazakhstan. Hungary scored three points in the second end, then stole three more points in the third end on the way to their win.

Australia, came from 5-1 behind at the fourth end break to defeat Latvia, 7-5. In that second half Australia scored a single point in the fifth end, before stealing single points in the sixth and seventh end. They capped of their win with a steal of three points in the eighth end for their first win this week.

In Sunday’s afternoon session Scotland opened their game against Luxembourg with a score of five points on their way to a 12-3 win and almost had another big score in the third.

As Scotland skip, Luke Carson explains, “He [Alex Benoy; Luxembourg Skip] played a few really good shots, in the third he played a great triple and roll with his last to force us to one.”

Talking about the rest of the game, Carson continued, “It was a good positive performance there and we’re looking forward to getting back onto the ice tomorrow.”

Turkey picked up their first win with a 6-5 win over Slovenia. Turkey were trailing 4-5 in the eighth end and were without the last stone advantage. However, they sat three shot stones when Slovenia skip, Tomas Tisler, attempted the hit to remove them all. He was only able to remove one Turkish stone, giving up a steal of two points and giving Turkey the win.

Ireland held off a Chinese Taipei fightback to win their third game of the week, 6-4 and sit joint top of the group unbeaten with Scotland.

Ireland took a 5-1 lead into the fourth end break, before Chinese Taipei scored a single point in the fifth end and stole single points in the sixth and seventh ends. In the eighth end, Ireland buried a stone on the button behind several guards and despite their best efforts, Chinese Taipei were unable to remove it. Ireland were left not needing to throw their final stone and picked up the 6-4 win.

Italy beat Japan 7-4 in the evening session to pick up their first win of the week. Italy scored three points in the sixth end, then stole two points in the eighth end to hold on for the win.

Russia defeated Austria 11-2 in six ends to record their second win of the week after defeating Switzerland yesterday evening. Russia opened their game with a score of four points in the first end, then steals of two points in the second and third ends.

Russian second, Daniil Goryachev said of the strong start, “Yesterday’s game was difficult for us and we knew it was one of the most difficult games in our group. Today we wanted to start strong and get a comfortable score and we managed that. We took control for the first few ends, then we relaxed a little and they stole in the fifth.”

With two wins out of two, Goryachev looked ahead to the rest of the week, saying, “The wins give us confidence, but we won’t relax now. We have five games to go and tomorrow’s game will be difficult against team Korea. They are great players, but we’ll try to win.”

In the final game of the evening session, Switzerland defeated England, 7-1 to record their first win. Switzerland took a 4-1 lead into the fourth end break, then stole single points in the fifth, sixth and seventh ends for the win.