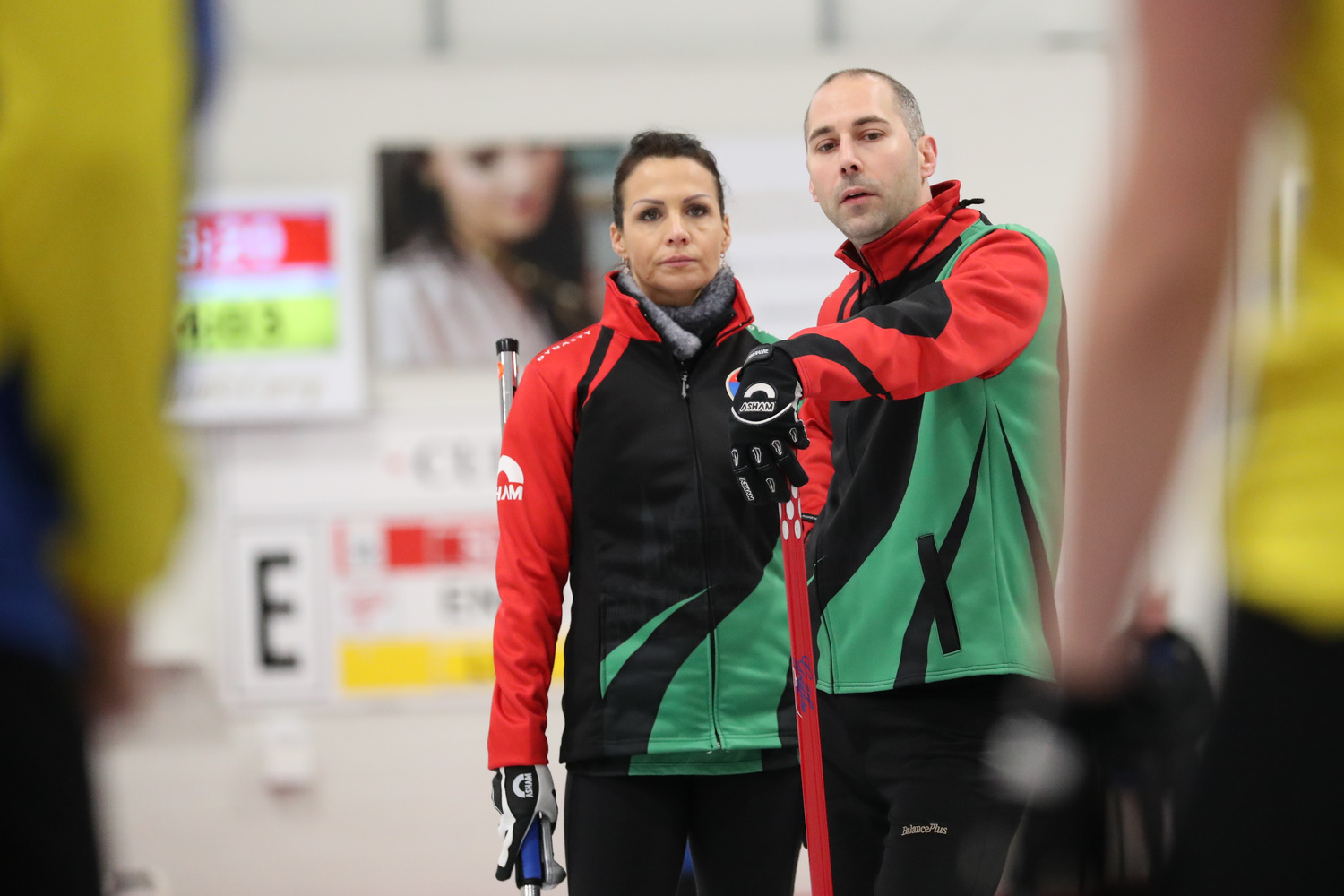 The round-robin at the World Mixed Curling Championship 2019 being held at Curl Aberdeen, in Aberdeen, Scotland continues with day three and will have four sessions of play once again.

In the Monday’s third session of play, the Group A teams took to the ice for the only time today.

Canada beat Slovakia, 7-4 after stealing three points in the first end, then scoring two points in the fourth and sixth ends on the way to their win.

Canadian skip, Colin Kurz talked about the game being an opportunity to learn more, ” I think we played well today. It was one of those games where we just kept learning more. More about the ice, more about each other, our tendencies and the way we throw. No matter the score, who has control of the game, you’re always trying to learn more so that later in the event you can do better.”

Hong Kong defeated Nigeria, 12-0, and opened the game with a score of four points in the first end. Hong Kong then went on to steal eight points over the next five ends.

Afterwards, Hong Kong skip, Jason Chang said, “Every win is very important in this group with lots of teams right in the middle. This was a good game for us to work on our hits, our draws and just really sharpen up for the rest of the week.” he continued, ” We’re getting close to where we want to be. A lot of these games coming up are going to be decided by one shot here or there. It’s not necessarily the skip who’s going to be making them.”

This session also saw Germany defeat Belarus 8-0. Germany stole all their points in this game on the way to their win. In the final Group A game of the session, Estonia defeated Kosovo 18-1.

Denmark defeated Andorra, 6-1, in Monday afternoon’s only Group B game, with the rest of the group playing later in the evening.

Denmark opened the scoring with a single point in the first end, then followed that with single point steals in the next three ends to lead 4-0 at the break. A score of two points in the sixth end was enough for Andorra to concede.

Denmark skip, Tobia Thune said afterwards, “That’s three wins now, so I think we’re doing well. I think it’s very important to stay focussed, especially when you meet teams who aren’t at the top of the table, you need to stay focussed on your own game plan. At the end of the week I think we’ll be better than we are now, we’re improving after each game. We’re not that used to playing together as a team, but we’re getting better each game.”

In Monday evening’s session, the remaining three Group B games took place with wins for Norway, Poland and Wales.

Norway defeated Croatia, 16-0, in six ends to pick up their third win this week and move to joint first in the group.

Kazakhstan opened their two-game day with a 7-6 win over Australia, that went all the way to the final stone in the eighth end, when Vice-skip, and fourth player, Sitora Alliyarova played a precise draw on to the button for the single point and the win.

United States defeated Latvia 7-3 in the morning session, opening the scoring in the second end with a steal of two points.

Talking about that end, United States skip, Hunter Clawson said, “There was a lot of pressure both ways, the second end where we stole two, up until skip stones it was looking like it could have been two or three for them. They had a lot of rocks piled on top of the rings and we were able to get a little lucky on their shots and make a couple of nice ones on ours to make them shoot against a bunch. And lucky enough we got the steal.”

Clawson continued on how they went about applying pressure to get their second game of the week, “We just tried to put rocks in the rings to setup ends, playing for the points and kept making them play tough shots.”

In the other Group C game of the session, Hungary continued their unbeaten run in the competition with a 9-3 win over Sweden to sit at the top of the table on three wins.

The evening session saw the remaining Group C teams returning to the ice for the second time today.

Spain became the only unbeaten side in Group B after a confident 7-2 win over Australia. After which, Spanish skip, Sergio Vez said, “We knew it was going to be a tough game. We lost to them a couple of years ago at the worlds.” he continued, “But we, had a really solid game. We played the way we wanted to play. We’re playing better and better every day and we’re definitely doing the things we planned to do here. Every game, every situation. Things are going well and we’re looking forward to our next game.”

United States beat previously undefeated Hungary 7-4 in this session. After a slow start, United States bounced back to take a 4-3 lead into the break on the way to their second win of the day.

In the session’s final game, Sweden bounced back from an earlier defeat to beat Latvia 9-2.

Sweden opened with a score of two points, then stole three points in the second end, and single points in the third and fourth ends on the way to their win.

Swedish skip, Simon Olofsson said afterwards, “We played really well throughout this game, we picked ourselves up since the game this morning where we didn’t play to the best of our abilities. It was nice to get a convincing win like this. We came into this game with a really good attitude, so we need to keep that going for all our other games too.”

Slovenia defeated Luxembourg, 11-2, in the morning’s only Group D game. Leading 3-1 at the break, Slovenia began the second half with four points in the fifth end, then scored four more points in the seventh end before Luxembourg conceded to give Slovenia their first win.

After their win, Slovenia skip Tomas Tisler said, ” It feels great to get that first win, especially because we had a tough loss yesterday against Turkey. We were controlling that game and then we lost it, so it feels good to come back.”

Thinking ahead to the rest of the week Tisler added, “We just have to keep playing like we did today, and even yesterday, but just make one or two more shots and we’ll get more wins.”

In the day’s second session, Italy defeated Chinese Taipei 10-2 to pick up their second win of the week.

After a slow start, Italy took control int he second half scoring two points in the fifth end, then stealing a single point in the sixth end and five points in the seventh end, after which Chinese Taipei conceded.

Afterwards, a happy Italian skip, Denise Pimpini said, “We feel great, because we are playing at a higher level than before. Before this we haven’t had a lot of practice. We’re confident with the ice now. The more we practice and get a feel for the ice, it gives us more confidence. We are very positive and really happy.”

Ireland continued their unbeaten run in the competition with a 9-3 win over Japan. After a tight opening half, Ireland broke open the game with a score of four points in the fifth end, then stole a single point in the sixth end and two points in the seventh end, at which point Japan conceded.

Irish skip, John Wilson, said afterwards, “It’s unbelievable being 4-0. We knew going into that game the Japanese are a really good team, they’re the Youth Olympic Team.” Talking about their strategy in the game he added, “We managed to pull out a couple of doubles after that and put the pressure on them. After the four in the fifth end, it was just a case of keeping our nerve.”

Scotland kept pace with Ireland at the top of the group table on four wins after defeating Turkey, 5-3, in this session.

In the only Group E game of the morning session, Austria beat Belgium 5-4. The game was level at 4-4 going into the eighth end, when Austria with last stone advantage scored the single point to pick up their first win of the week.

Afterwards, Austrian skip Andreas Unterberger said, “It’s good for the motivation to get that first win. We have games in front of us so we’ll see if we can get more. It was tight in that last end, so either of us could have won.”

Switzerland picked up their second consecutive win by defeating France, 6-2. In a close fought game, Switzerland separated themselves int he second half, scoring one point in the sixth end, then stealing a single point in the seventh end and followed that with a steal of two points in the eighth end for their win.

Swiss skip, Manuela Siegrist said afterwards, ” I think we’ve finally arrived here now, we feel very good. They [France] made it difficult, but I think our experience helped us out there today.”

Russia became the sole unbeaten team at the top of Group E, after a 10-2 win over Korea. After blanking the opening end, then giving up a steal of two points in the second end, Russia went on to score ten points over the next four ends, after which Korea conceded.