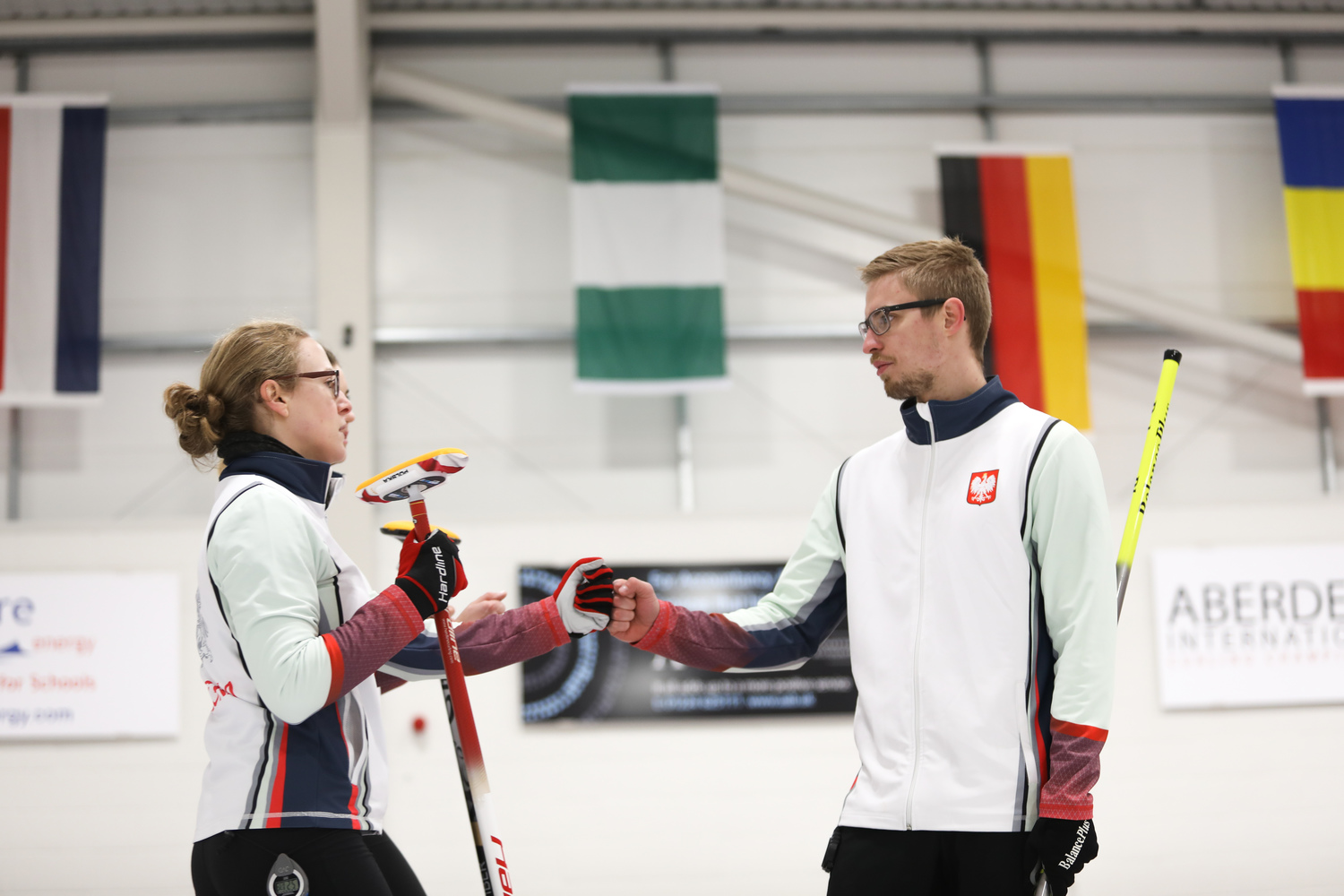 Day six brings an end to the round-robin stage of the World Mixed Curling Championship 2019 at Curl Aberdeen, in Aberdeen, Scotland. At the beginning of the day, six play-off places remained, and all will be claimed by the end of the day’s fourth and final round-robin session.

Updates on all five groups were added to this story as the day unfolded.

Heading into the final day of round-robin play, two of the three guaranteed play-off places from Group A had been secured.

The third spot was claimed by Slovakia despite not being on the ice for the morning session, when Canada defeated Estonia, 7-2.

Hong Kong returned to winning ways in the morning session with a 6-2 win over Kosovo.

In the early evening session, Canada defeated Kosovo, 17-3, to complete their round-robin campaign undefeated and secure first see in the overall rankings going into Friday’s play-offs.

Canadian skip, Colin Kurz said afterwards, “We came out and played a really good game, probably one of our more complete games this morning, against a really good Estonia team. That was a really good confidence builder for us. Then we had our first two game day today, so we went back, relaxed, then came back here and had a tonne of fun in out there too.”

Hong Kong defeated Germany, 7-6, for their second win of the day, helped by scores of three points in the first and third ends. Despite this loss Germany still finished second in Group C.

Belarus defeated Nigeria, 19-1, stealing 13 points in the first five ends, then capping their win with a score of six points in the seventh end.

In the morning session, New Zealand defeated Croatia, 7-6 helped by an early steal of three points in the second end, for their second win of the championship.

The remaining Group B teams took to the ice in the second session of the day, with one qualification place secured by Denmark and the other two available to three teams.

Norway were the first team to secure one of the places when they defeated Wales, 9-1, scoring in all but one of the ends played.

Afterwards, Norway skip, Ingvild Skaga said, “We’re really happy. It was a good game. We just played it simple and waited it out. We just wanted to play some good stones, win and get ready for the play-offs.”

Poland defeated Andorra, 7-1 in this session to put themselves in a position to claim the third play-of place if other results went their way.

Afterwards, Poland skip Bartosz Dzikowski said, “We didn’t play great in this game, but we did enough to win which was the most important thing. Now we have to wait on what happens on the other sheet.”

Dzikowski continued, “The only things we could do, were play a good draw shot in case that counts, and just win. We did the latter, but not the first one. So, we had to just play our game and see what happened. Whatever else happens we can’t control that.”

Czech Republic faced Denmark and needed a win in order to progress to the play-offs. However, Denmark controlled the game, winning, by 6-1.

After blanking the first three ends, Denmark opened the scoring in the fourth end with a score of two points. They then went on to steal a single point in the fifth end and three points in the sixth end on the way to their win.

With the Denmark win, Poland claimed the third guaranteed play-off place from Group B.

With all three guaranteed play-off places already secured, the teams in Group C were playing to finalise their group order.

In the early afternoon session, Spain defeated Brazil, 7-2, to extend their unbeaten run at this championship to six games. With their game in the evening session against Hungary determining who will finish the group in first place.

In a game that would decide the best fourth-place finisher, Sweden defeated Kazakhstan, 7-5. The game turned in the fifth end, with Sweden scoring two points, then stole two points in the sixth end.

Speaking about the turning point in the game, Sweden skip Simon Olofsson said, “I think in the fifth end, when we took the two, was a momentum shift. They had a big mistake on their second rock so we had a bunch of corner guards and could attack as much as we wanted, we got an easy deuce from there. The next end we played it perfectly and managed to steal two there. Then, we could just play our own game to finish it.”

In the session’s final game, Australia held on to defeat United States, 7-5.

Spain secured top spot in Group C after a 7-5 win over Hungary in Thursday’s final session, to remain undefeated in the round robin. Despite trailing 0-3 after three ends, Spain fought back to move into a 5-3 lead after five ends. A single point steal in the sixth end and a score of one point in the eighth end sealed their win.

The other Group C game in the last session, saw Latvia defeat Brazil, 11-3, in six ends.

In the first session of the day, Chinese Taipei picked up their second win of the week, by defeating Luxembourg, 5-2.

Afterwards, Chinese Taipei skip Randolph Shen said, ” We had a good game against Turkey, then the following games were a bit below what we’re capable of. But we have to realise that this is a process for us.”

Talking about the new mixed team, “We have three very talented curlers, but just not in this environment. A lot of it was just getting used to the teams we were playing, getting used to the environment, what it means to be at an international event. There are a lot of off-ice things that we have to get used to as a team. But, we’re happy to end with a win. A win is good. As a young team we have to get used to winning and hopefully that’ll come.”

With only one play-off place remaining in Group D, Japan kept their hopes alive by defeating Slovenia 11-5.

Japan now sit on a record of four wins and three losses and await Italy’s game against Turkey to discover if they have done enough to claim the remaining play-off spot.

With the last remaining play-off place on the line, Turkey defeated Italy, 8-5, in a double extra-end game.

Italy took the lead at the break, stealing single points in the third and fourth ends to go ahead 4-2. However, Turkey fought back and scored two points in the eighth end to take the game to an extra end.

In that extra end, Italian fourth player, Fabio Sola, played a hit on the sole Turkish shot stone, but was unable to keep his shooter in the house, blanking the extra-end and taking the game to the championship’s first double extra end.

Once again, Sola had a chance for a hit to win, but was wide of the Turkish shot stone in the four-foot, giving up a steal of three points, the win and the final spot in Friday’s play-offs.

Afterwards, a relieved Turkey skip, Dislat Yildiz said, “We worked very hard and I’m very happy that we made it to the play-offs. I believe we’ll be better going forward. It was really important for us to make the play-offs and we’ll work very hard to get to the final.

On the unexpected additional extra end, she added, “I was only expecting one extra-end, the second was a surprise, there was a lot of pressure in this game, it was like a final.”

Scotland beat Ireland, 7-3, in the final session of Group D to complete their round-robin undefeated and claim first place in the group.

Switzerland defeated Belgium, 6-3, in the morning session finishing their round robin with a record of six wins and one loss.

In the early afternoon session, Korea beat England, 7-2, to take the final play-off place from the group. Korea opened the scoring with three points in the first end, then took a 6-1 lead into the break on the way to their win.

Russia completed their round-robin stage undefeated, after beating France, 9-2, in the stage’s final session. Leading 4-2 at the fourth end break, Russia went on to score two points in the fifth end before stealing three points in the sixth end, after which France conceded.

Finland closed their championship with an 8-0 win over Austria to record their fourth win of the championship and finish fourth in Group E.

The last-16 stage is broken up into two sessions to be played on Friday 18 October. The first session begins play at 09:00, while the second session begins at 13:00 British Summer Time. These Last-16 sessions will be followed by a quarter-final round at 19:00 later that evening.