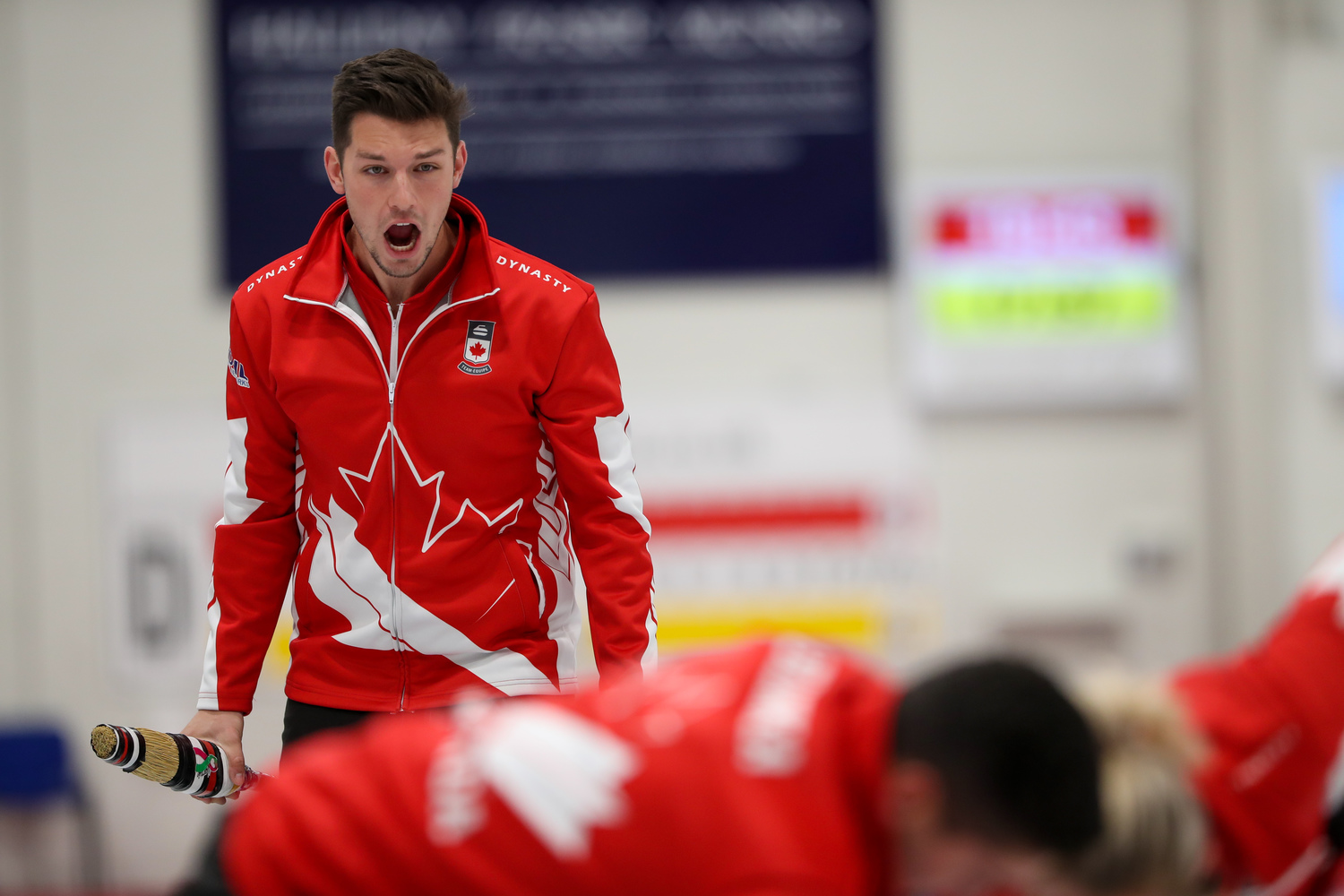 The opening day saw Nigeria make their world mixed championship debut, while Kosovo’s on ice debut was delayed due to travel issues, forcing them to forfeit their first game.

The teams from Group A took to the ice for their only game of the day in the morning’s opening session.

Canada began the defence of their title with a 6-3 win over Germany. With the score level at 2-2 going into the break, Canada stole two points in the fifth end to take the lead that they would hold on to on their way to the 6-3 win.

After the game a delighted Kurz said, “That was fun! It was good to get our legs under us and play a game here. It’s been a couple of days of waiting around to play, but once we started playing we got the nerves out early. We played really well and that team [Germany] is really good, fun to play against and super nice guys.”

Reflecting on his last shot to win the game, Kurz said, “Any time you play in a big event there’s always a little bit more pressure and that was the first last rock I’ve thrown at a world championship so the legs were chattering a little bit, but I just tried to throw it the same as always and it worked out.”

Belarus defeated Hong Kong 6-4 in their opening game after taking a 3-2 lead into the break. With the score tied at 4-4 after seven ends, Belarus were sitting two stones in scoring position when Hong Kong skip, Jason Chang was left with a draw with his final stone to win the game, however, he was a little wide and heavy with that draw, giving up a steal of two points and Belarus the win, 6-4.

Elsewhere in the session, Estonia began their championship with a 16-1 win over Nigeria who were making their debut in a world mixed championship. While in the final game in Group A, saw Kosovo forced to forfeit due to travel issues, giving Slovakia an opening win.

The opening day’s third session saw the Group B teams open their championship with wins for Croatia, Czech Republic, Norway and Poland.

Croatia defeated Andorra, 6-3, to record a win on their opening game. Andorra took a slim 3-2 lead into the fourth end break, but in the second half of the game, Croatia would steal four points over the next three ends before running Andorra out of stones in the eighth end.

Afterwards, a delighted Croatia skip, Alberto Skendrovic said, “This is an unbelievable feeling. It’s the first time my team has won a game at the worlds and it was in our first game. We feel great. The first half of the game was not that good. We were struggling, but we recovered. All-in-all, we are very happy.”

Norwegian skip, Ingvild Skaga said afterwards, “That was a good game. It’s good to get started and we got off to a good start and played some good stones. I think we had good control on the ice, how much it curled and the weight and that was the difference really.”

The final Group B game of the session saw Poland defeat Wales, 5-2. Poland blanked the opening end, but followed that with scores of two points in the second and fourth ends to take a lead they would hold for the rest of the game.

Half of Group C’s teams took to the ice in the day’s opening session and saw wins for Hungary and Kazakhstan.

Hungary defeated Brazil 14-2 in their opening game to get their first win on the board. Hungary started strong, scoring four points in the first end, then five points in the third end to take a commanding lead that Brazil could never recover from on the way to their 14-2 win.

Hungarian skip, Gyorgy Nagy said about their strong start, “Our plan was to begin very hard from the first end. That’s what we did and we were lucky in the first end to get four [points], then we just kept attacking.”

Kazakhstan, playing with three players this week due to travel problems opened their competition with a strong performance, defeating Latvia 12-5 after seven ends.

The remaining group C games took place in the afternoon’s third session with wins for Spain and Sweden.

Spain tied the score again in the seventh end with a score of two points. Then, in the eighth end, with the final stone and the opportunity to draw for the victory, United States skip, Hunter Clawson caught a guard stone, giving up a steal of three points and the 7-4 victory to Spain.

In the session’s final game, Sweden defeated Australia 8-5, helped by a score of four points in the fourth end to take a strong 6-2 lead at the break. Australia attempted to fight back, but a further score of two points in the eighth end be Sweden secured the win.

The second session of play saw Group D teams take to the ice for the first time, with six of the eight teams competing.

Hosts Scotland defeated Italy by a score of 7-2 in just six ends. After giving up a steal of one point in the first end, Scotland bounced back with three points in the second end on their way to a 4-2 lead at the break.

“They were chasing trying to make two back and us forcing the one.” said Scotland skip, Luke Carson on his side’s opening half. He went on to say, “We had a good chance on four, but [Fabio Sola; Italy fourth] made a good triple with his last to force us there.”

Steals of two points in the fifth end followed by a single point steal in the sixth end was enough for Italy to concede with Scotland ahead 7-2.

Looking ahead to their second game in this evening’s final session at 20:30, Carson added, “We’ve got a big game tonight against Japan, they’re looking pretty solid, so it should be a good game.”

Japan defeated Luxembourg 11-3 after six ends. Japan took a 5-2 lead into the fourth end break, before scoring six points in the sixth end after which Luxembourg conceded.

In the final Group D game of session two, Ireland defeated Slovenia 8-5. Slovenia took a 4-1 lead going into the break, but Ireland bounced back with a score of four points in the fifth end. In the eighth end, Ireland skip, John Wilson played a raised take-out with his final stone to clear a Slovenian shot stone, score two points and secure the 8-5 win.

“Their skip [Tomas Tisler] had a lovely shot with his second last to put us up against it there. But luckily, I’d just gone down the same line with my first shot, so I knew the ice, knew what it was doing and managed to pull it off.” said Wilson about his final shot after the game.

He added, “Getting the win settled the nerves a little bit. It’s a good start. We knew we were going to be in about it. We’ve played against them a lot in the European-C, both the boys and the girls, so we know what their ability is. It was a good game right the way through.”

In the final session of the opening day, Chinese Taipei defeated Turkey, 9-7 in an extra end. While Ireland and Scotland won their second games of the day.

Chinese Taipei took an early 6-0 lead after three ends, before facing a Turkish fight back, where they scored seven unanswered points over the next four ends. Heading into the eighth end, trailing by a point, Chinese Taipei scored the single point to take the game to an extra end, before stealing two points in that extra end for the win.

Ireland defeated Italy, by 7-6, to record their second win of the day and inflict Italy’s second loss of the day. With the score level at 6-6 going into the eighth end, Ireland used their last stone advantage in that end to score a single point for the win.

In the group’s final game of the day Scotland held on beat Japan 5-4 to pick up their second win, when Japan’s final stone rolled out after a hit to blank the eighth end.

During the day’s second session of play, six of the eight Group E teams also took to the ice with wins for England, Finland and an extra-end win for Korea.

Finland struggled with their consistency yet managed a 12-5 win over Belgium after which their skip, Markus Sipila said, “Winning feels good, but I’m not too happy with our performance so far. There were many unforced errors, but it’s a good start.”

Despite the 12-5 scoreline, Sipila added, “If we want to qualify for the play-offs we really need to improve from here. We have a really tough group and you have to be careful with your stone positioning going forward, so we’ll need to pay attention to that.”

England defeated Austria by a score of 7-4, after taking a 4-1 lead into the break. Then in the final game of session two, Korea defeated France, 6-5, in an extra end. After France levelled the game at 5-5 in the eighth end, Korea used their last stone advantage in that extra-end to draw for the single point they needed for the 6-5 win.

In the evening session, Russia recorded an opening victory over Switzerland, by 6-3. The scores were level, 2-2, at the fourth end break, then in the fifth end, Russia scored three points to take a lead that they held onto for the remainder of the game.