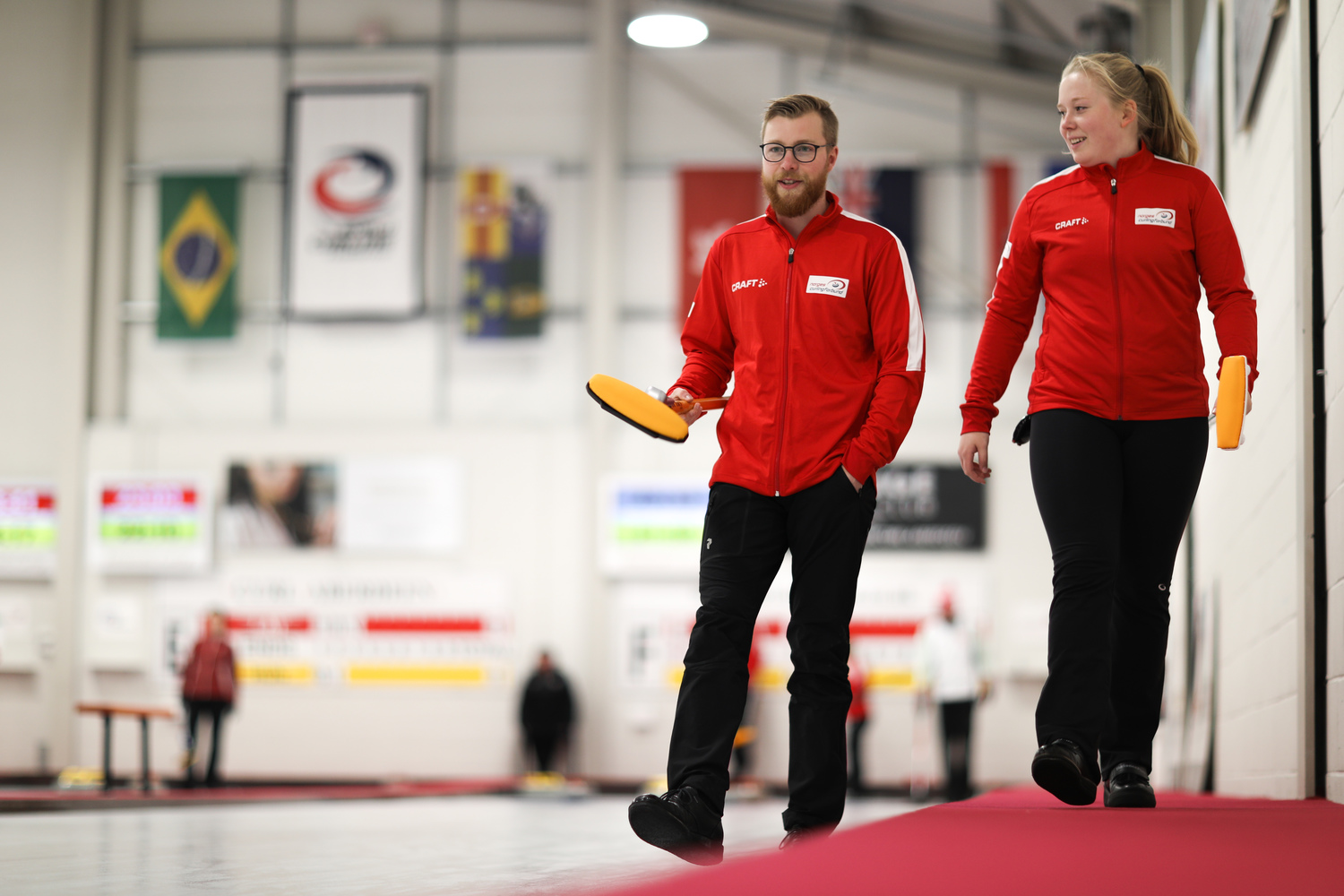 The final session saw the Group A teams take to the ice for the first time today.

Canada defeated Hong Kong, 8-6, in a closely fought game. Hong Kong took the lead with a score of three points in the first end, then stole a single point in the fourth end to take a 5-2 lead into the break.

Canada fought back in the second half with a score of three points in the fifth end, two points in the seventh end and a steal of one point in the eighth end sealed the win leaving Canada unbeaten at the top of Group A.

Canada Vice-skip, Meghan Walter said of their tough win, “They started off the first end pretty well, and they had some good shots. But we fought back and it was a hard fought battle.” She went on to add, “Getting these kind of wins under our belts is always a good thing, you can’t expect to have every perfect game so we always need to have those tough ones to fight back in.”

Belarus recovered from giving up a steal of four points in the first end to defeat Estonia, 8-6. After giving up the four-point steal, Belarus went on to score eight unanswered points, then held on for their second win of the week.

Belarus coach, Alexander Orlov speaking about the team’s performance and mentality said, “We’re getting better and that’s the most important thing. Our main goal was to be more consistent. We’re getting there and I can feel that. What I like about this team is that they don’t give up.”

Also, in the evening session, Germany defeated Kosovo 14-1, while Slovakia secured a 14-0 win over Nigeria.

In Tuesday’s late morning game, Czech Republic, Denmark and Norway all won to move one step closer to the three guaranteed play-off places from the group with all three sides sitting on a record of four wins and one loss.

Czech Republic bounced back from their loss yesterday to defeat Croatia 12-2. Czech Republic opened the scoring with five points in the first end, before closing the game in the sixth end with a steal of three points.

Afterwards, Czech Republic skip, Eva Miklikova said, “This game was really good for us. We concentrated well and played well. Winning this game was really important, just like every game here. I think we’ve played well all week, yesterday’s match wasn’t so good, but we’re happy with the way we’re playing.”

Norway defeated Poland, 6-4, in a close game where both sides were looking to move onto four wins.

Afterwards, Norway skip Ingvild Skaga said, “It was a good game, an important one to win. I think we played the way we wanted to play today. We had a good game but winning the next two games is very important too.”

Denmark beat New Zealand 6-3 to hold onto their place as joint first in Group B, while in the last game in the group saw Wales defeat Andorra 7-5.

Hungary and United States moved back to the top of Group C on Tuesday morning with their fourth wins of the week.

Hungary defeated Latvia, 7-3, after going into the fourth end break tied at 2-2. Hungary took the advantage in the second half by scoring three points in the fifth end, then two points in the seventh end for the win.

United States defeated Sweden, 8-3, after leading 6-2 at the fourth end break. A further score of two points in the sixth end brought the game to a close.

Hunter Clawson, the United States’ skip said about their win afterwards, “We felt really confident, the team was making every shot. It was a little tricky in the first two ends with the ice being a little different that we’ve seen, but it’s nothing we’re not supposed to adjust for.”

Spain took an early lead with a score of two points in the first end, then a steal of one point in the second end. Later, a score of four points in the fifth end put them beyond Kazakhstan’s reach to remain the only unbeaten side in Group C.

Australia picked up their second win of the week, defeating Brazil 10-1, scoring in all but one of the seven ends played.

Australia skip, Hugh Millikin said afterwards, “We did a few things right that we haven’t done all week so that was good. We put them in tough positions, he had real tough shots every end and that was the objective. We’re still alive, very wounded but still alive. We’ll just go out tomorrow and do the best we can and see what happens.”

Scotland remain the only undefeated team in Group D after their 11-4 win over Chinese Taipei in Tuesday morning’s first session.

Turkey inflicted Ireland’s first defeat of the week in the morning session, with a 5-3 win. Turkey took a 4-1 lead after five ends, then held off an Ireland fightback to record their second win of the week.

Japan opened the scoring with six points in the first end and never looked back from there. Afterwards, Japan skip, Takumi Maeda said, “We had a great first end today [by scoring six], then after that we got into a rhythm quickly.”

Talking about his first international event he added, “Throughout this event we’ve had a lot of good experiences competing against different teams. Learning from this international experience will help us a lot at the Youth Olympics next year. We’re really happy we got to come to Scotland where curling started.”

Italy beat Slovenia, 7-5, to record their third win and keep themselves in play-off contention. After opening the scoring with three points in the first end, Italy took a 6-1 lead at the break on the way to their win.

In the Tuesday morning’s opening session, Russia beat England, 9-3, to win their fourth game and remain the only unbeaten team in Group E.

Switzerland beat Korea, 5-3 in a tight game, helped in part by a score of three points in the fourth end, followed by a steal of one point in the fifth end. This is Switzerland’s third win and puts them into joint second place with Finland with both sides facing each other in the afternoon.

France secured their first win of the week when they defeated Austria, 7-4. France opened the scoring with a single point, then stole two points in the second end, before holding off an Austrian fight back late in the game.

A very relieved France skip, Stephane Vergnaud said afterwards, “We’re very happy because it’s our first win. Since the beginning we’ve done as best as we can and played correctly, but we’ve lost those first four games, so mentally it’s good to get a win.”

Russia beat Belgium, 10-3 in six ends to remain undefeated at the top of Group E. Russia took a 4-1 lead into the break before scoring six points in the sixth end to seal their fifth win.

The final game in the afternoon session say Switzerland defeat Finland, 9-5. Trailing 4-5 after six ends, Switzerland scored four points in the seventh end, then stole a single point in the eighth end for their fourth win of the week.