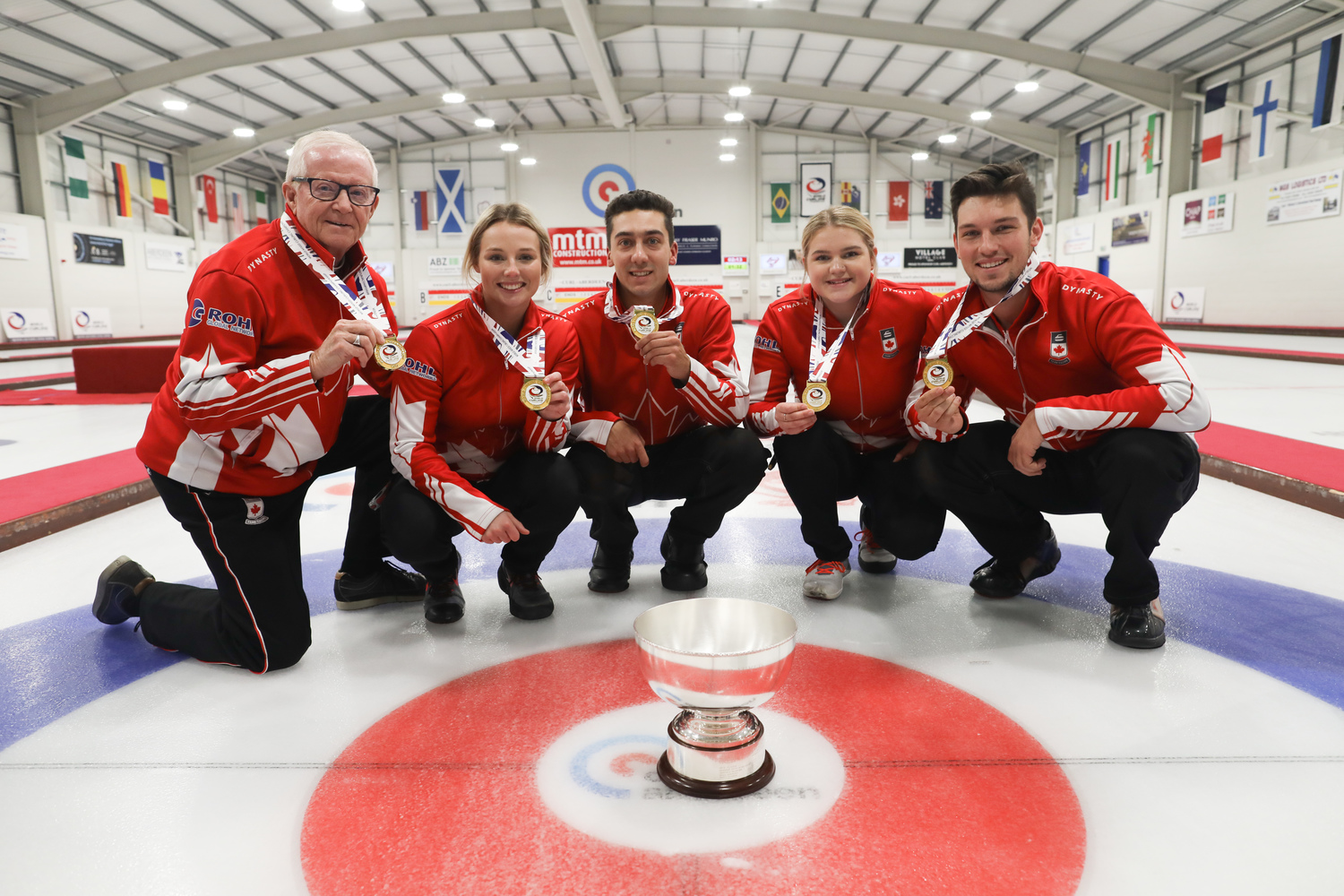 Canada became the first ever back-to-back World Mixed champions at the World Mixed Curling Championship 2019 being held in Aberdeen, Scotland, while Germany took the silver medals and Norway won the bronze medals.

Canada blanked the first two ends, then in the third end required a measure to score the single point.

In the fourth end, Germany – skipped by Andy Kapp; with third, Pia-Lisa Schoell; second, Benny Kapp; and lead, Petra Tschetsch – were forced to draw to the button for one point to level the score at 1-1 going into the break.

In the fifth end, Kurz was left with a hit to score three points and to take a 4-1 lead in the game.

Germany responded instantly, with Kapp playing a spectacular raise-double take out to score three points and level the game once again.

In the seventh end, Kurz was marginally wide with a draw, giving up a steal of one point, giving Germany the lead going into the eighth end, but retaining the last stone advantage.

In that eighth end, Kapp attempted a hit-and-roll with his final stone to clear one of the Canadian shot stones, but was unable to move it far enough, giving Canada a score of two points without Kurz having to throw his final stone.

After becoming the first back-to-back champions, Kurz said, “World Champion has a good ring to it. We’re very happy, it hasn’t really sunk in yet, but it’s kinda what we came here for. That we were able to achieve that I couldn’t be happier for the team.”

Talking about representing Canada in this championship, he added, “Representing your country is something you always look forward to and you never know if you’re going to be able to do that, so getting that opportunity we tried to represent it with pride and managed to get the gold medal.”

Kapp reflected on the game after taking the silver medals, saying, “We were lucky in the sixth end to score the three, then when we scored the one, we thought we had them. But I made two sweeping mistake calls in the last end.”

Then talking about his team this week, he added “The way the whole team played throughout the whole week, we all stuck together and never gave up. I’m really proud of my team.”

In the bronze medal game played at the same time, Norway defeated Korea, 6-5.

Korea, after blanking the first end, scored two points in the second end, then had a draw for two more points in the fourth end, to take a 4-1 lead into the break.

In the fifth end, Naess had a draw for two points, then in the sixth end Korea were forced to play a hit-and-roll to just give up a single point steal.

Korea then scored a single point of their own in the seventh end.

In the eighth end, Korea were sitting shot stone when Naess, with his last stone, played a spectacular raise take-out to score two points for the win and the bronze medals.

Afterwards an emotional Skaga said, “I’m so happy and shaky. That last shot… what a way to finish.”

This was the third year in a row, Skaga had found her team in the bronze medal game, but the first time Norway had won the medals. On finally winning the a world mixed medal Skaga said, “I’m so relieved, I’m shaky and the tears came right away. I’m so happy.”

Then when discussing the game against Korea, she added, “We started off not so good, but the last four was ours. They had a good last shot to make it tricky for us, but we still had quite good control in that last end.”

You can get all the information about the World Mixed Curling Championship 2019 by following us on Twitter, Instagram and Facebook and using the hashtags: #WMxCC2019 #curling