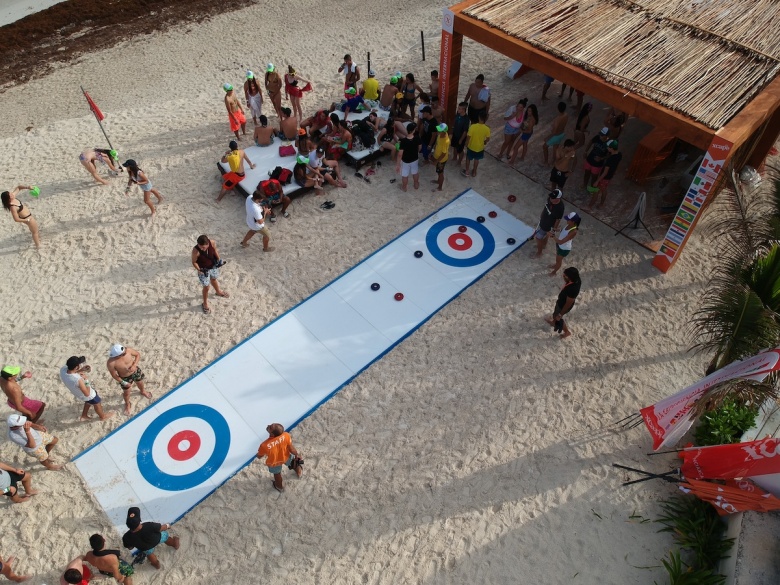 Not having curling ice doesn’t mean no curling. Thanks to Rock Solid Productions Inc. who are the official development partner of the World Curling Federation, curling fans can curl anywhere, anytime.

Rocks & Rings is an initiative that allows students in Canada to learn about and play floor curling in their school. Instructors visit school gymnasiums across the country, giving students the opportunity to learn the rules of the game, sweep, throw floor curling stones – and of course, yell “hurry hard!”

“Rocks & Rings was designed to bring the sport to kids, instead of waiting and hoping for kids to come to the sport,” explained McMullan.

“Traditionally kids in Canada have curled because their parents have. This has resulted in demographics that are not even close to matching that of Canada’s, which is growing through immigration and not birth rate. Rocks & Rings goal is to change that, and in less than two years we will reach our two millionth child in Canada,” he said.

Following in the footsteps of Rocks & Rings, students who enjoyed their first taste of curling and want to test their skills on-ice have the opportunity to do so through the Curling 101 programme.

“Kids come home from a day of Rocks & Rings at their school and have had so much fun that they practically beg their parents to take them to the upcoming on-ice session,” said McMullan.

“The participation numbers have been wildly successful and the envy of other sport organisations in Canada. They then receive an on-ice intro that has been tried and tested over the years, and has a very high conversion rate.”

“A large percentage of attendees sign up for further programming at the host club after their intro. The on-ice session is not a “Learn to Curl”. It is an intro that leaves them wanting more,” he explained.

Witnessing the success of floor curling within the schools in Canada sparked the need for FloorCurl and Street Curling equipment, which are used worldwide. Member Associations from non-traditional curling nations, such as newcomers Brazil, Guyana, Nigeria, Mexico and Kosovo have greatly benefitted from having access to ice-less curling.

“The biggest challenge is that every one of those countries does not currently have an ice rink. Our products and services help in these cases because they help raise awareness of curling, and generate interest from groups that can eventually make real ice a reality, through connections or financial contributions,” said McMullan.

This year at the World Mixed Doubles Curling Championship, the impact of Rock Solid Productions Inc. was evident, with Kosovo, Mexico and Nigeria – the first ever African nation  – all competing at a world championship for the first time.

This year, the World Curling Federation Congress will be held in Mexico – another first – something McMullan claims he is proud of assisting Mexico successfully bid for.

“The rewards are seeing the growth and the public coming out of the woodwork to help build this dream. Mexico and Brazil are very close to opening their first ever dedicated curling rinks,” said McMullan.

On top of growing the game, Rock Solid Productions Inc. has raised awareness about curling through high profile activations at events such as the Super Bowl, the TV show Big Brother Canada, and beach curling in Cancun, Mexico. Celebrities including James Hinchcliffe (Canadian Indycar driver), the Prince of Sweden and Canada’s Olympic bobsledder Kaillie Humphries have all had the chance to test out curling as well.

“The Super Bowl in Indianapolis was our first ever Street Curling event and we were the second most popular attraction in the 200,000 capacity Super Bowl Village after the zip line. There were line-ups of people wanting to try curling from 10am to 10pm every day, all week,” said McMullan.

Building on their success, Rock Solid Productions Inc. will continue to grow the game in partnership with the World Curling Federation. A video series will be launched within the next year, showcasing how to introduce curling with FloorCurl equipment – exposing curling to even more nations around the world.