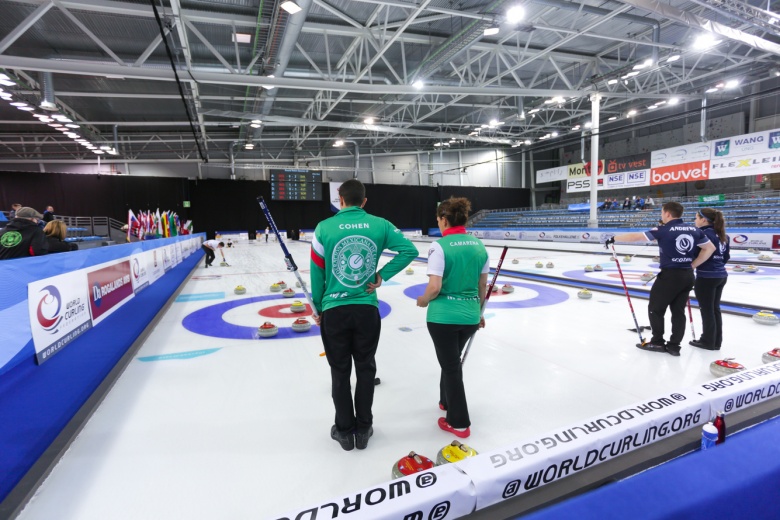 Paula Herrera had no idea what an eventful night it’d be when she settled in for a relaxing evening at home in Mexico City to watch the 2014 Olympic Winter Games with her partner Rodrigo Velez. For some reason, they decided to watch curling!

I said, “I’ve never seen this before,” Herrera recalls. “We got really interested and we were watching it together, that’s when the idea came up.”

The idea would prove to be fateful. Velez turned to her, “Here we have ice skating, hockey,” he said, “Why don’t we have curling?” He wanted to start a curling federation in Mexico.

“I told him he was crazy at first,” said Herrera, “but crazy ideas are always the good ones.”

Fast forward five years and the two, now married, are at the forefront of the Mexican curling federation, spearheading initiatives to get dedicated ice to Mexico, to have a team at the World Mixed Doubles Curling Championship 2019 and to host the World Curling Federation Congress 2019 in Cancun. They love curling so much they even went to Canada on their honeymoon so they could try it first-hand on dedicated ice.

Mexico are not the lone curling pioneers in less traditional curling nations. Member Associations such as Portugal, Kyrgyzstan, Kosovo, Saudi Arabia, Afghanistan and Nigeria are all moving forward with plans to promote curling in their regions. For some countries, the growth of a sport such as curling provides the chance to create more sporting opportunities where there might be limited recreational or athletic pursuits to choose from.

You might be thinking, “But wait, how do they have curling ice in some of these countries?” Which is a valid question. Curling ice is expensive to maintain, especially in a hot weather nation without many curlers to support a local club. But, where there’s a will, there’s a way.

“We are holding some dry curling clinics in Nigeria, because we don’t have ice,” said Tijani Cole, who helped form the Nigerian Curling Federation. In Mexico, they’ve introduced beach curling on the sandy shores of Cancun. Kosovo has implemented street curling clinics, where they had an estimated 5,000 children try curling over a two-week period.

Many associations also have expatriates who practice on dedicated ice in North America. Tijani Cole, practices with his wife and mixed doubles partner, Susana Cole, in Colorado, where he was born and raised as a Nigerian-American [pictured above]. Though their team made it to the final session of the round robin at World Mixed Doubles Curling Championship 2019 without posting a win, they were undaunted.

“It’s a little intimidating but it’s invigorating at the same time,” said Susana Cole, “It’s challenging but it’s the love of the game and we are learning just by playing these teams.”

Playing other teams is part of the process for newer Member Associations who are trying to grow their ranks, which is why they’ll often send teams to countries with more developed curling infrastructure so they can learn.

Afghanistan, who promoted curling locally with an outdoor curling festival on lake ice in February 2018, sent a men’s team to practice in Russia where they also heard stories on how Russian curlers grew and developed their programme. Similarly, Kosovo has sent curlers to Budapest to practice.

While lofty dreams of Olympic glory are the motivating factor for some to start a curling association in their home nation, others have dreams that are closer to home – to create more recreation activities by growing a sport.

“Our dream, short term, was to come here, which is fulfilled,” said Meriton Zeneli of Kosovo at the recent World Mixed Doubles. “After we did that, our other dream was to get a point and we did it on the first match.”

Just one point is enough to satisfy the pioneers who are starting from the very beginning to bring curling to new locations. In Nigeria’s case, it was that one elusive win they were looking for.

After a week full of round-robin losses, Nigeria faced France in their last game of the tournament. With the same bold optimism that empowered them to bring curling to Nigeria, the team took the ice, this time coming through with their first ever win, beating France 8-5.

They couldn’t stop smiling when they left the ice as victors, for the first time ever. “We have a great opportunity to grow something from the ground up,” said Tijani Cole.