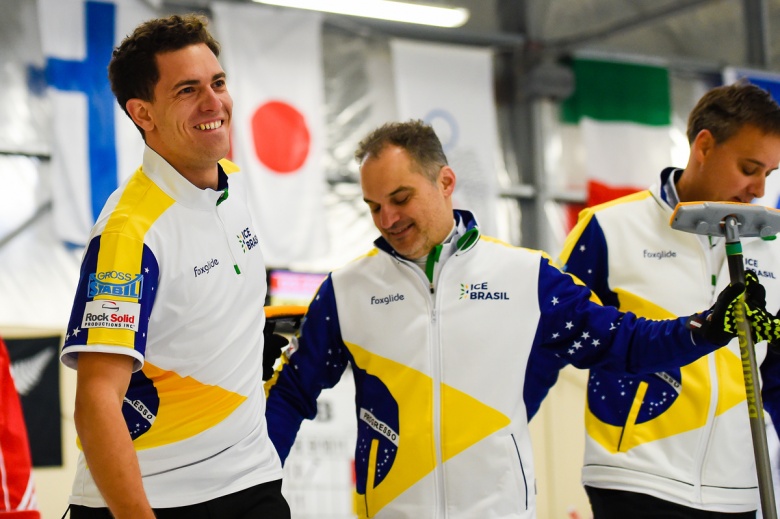 Not many teams would succeed in beating one of the top outfits from the United States or Canada three times in a best-of-five series and, particularly on away ice. But, until now, through the Americas zone qualification system, that has been the only route to participation in the World Curling Championships for the Brazilian federation.

Now, the new World Qualification Event has changed all that, and the Brazilians have a new opportunity, which in the past season they grabbed with both hands.

Not only did both their women and men record their first-ever world-level wins in Naseby, New Zealand in the new qualification event, the women’s team of Anna Shibuya, Luciana Barrella, Alessandro Barros and Debora Monteiro, supported by coach Barbara Zbeetnoff, finished fourth overall with three wins – over Estonia, Hong Kong and the hosts New Zealand.

The men’s only win came against Denmark and they finished in sixth-place.

Now, with these results, Brazil’s curlers are even more enthusiastic, as Sergio Mitsuo Vilella, Curling Director for the Brazilian Ice Sport Federation and member of the men’s team, explained. “Naseby was an amazing experience for the teams, we were so happy to be there. We’ve been pushing for a qualification event for quite a long time. We always said that the zonal system was making us look worse than we are and that a qualifying event was a realistic pathway to the Worlds for us.

“We know that we’re still growing and still learning. Perhaps we are not top ten, or top 12 right now, but for sure we are not 44th!”

He added, “We’ve always said that we needed the opportunity, and now we hope we are showing the world that we are here, and that we belong here.”

To outside observers, the recent explosion of Brazilian enthusiasm in curling has been something of a mystery, as Brazil rises to having the fifth-largest global TV audience for international championship coverage. But Sergio has an explanation for that. He explained, “It all started at the Olympics in 2010. This was the first time that Brazil had live coverage of Winter Olympics and Brazil has a huge audience for ‘novellas’ [soap operas], so people would be watching the novellas and after they finished, the broadcaster would switch to Olympic coverage after the novella because of the time-difference.”

As Sergio said, “Imagine you’re a Brazilian in 35 degree heat outside and you see people sliding on ice, screaming like crazy, with brooms! It was an instant hit! ‘What is that? How does it work?’.”

Looking forward, Sergio had an exciting update about developing the game in Brazil itself. “We are building an arena in Sao Paulo, thanks in big part to World Curling funding. We will have three dedicated Curling Rinks plus an ice hockey arena. Sao Paulo has 12 million people and we want to use this arena to help build a juniors’ base. We are close to the Mexican and Guyanese federations and we want to help our juniors to grow.”

Not surprisingly, Sergio was particularly pleased with the women’s team [pictured above] performance in Naseby. He said, “The girls are the proof that we wanted to show that if you commit to something then you can improve. They have been together for two years, based in Vancouver, [Canada]. Instead of giving up when they lost the Americas Challenge to Nina Roth [the United States Olympian], they kept going. They hired a coach with their own funds and kept playing.”

Sergio summarised, “We are 40 curlers spread around the world. We’ve had results in mixed doubles – we finished 17th in 2018. We’re trying to show the world that we are on the right path. Wait for us next year!”