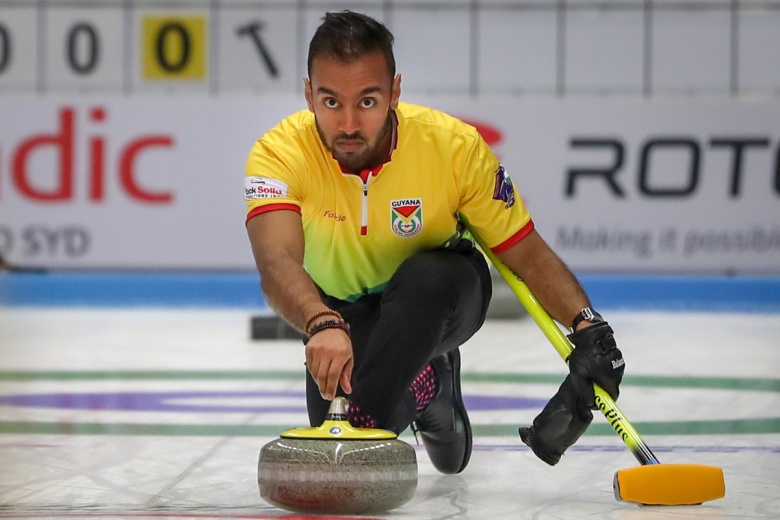 No curling ice? No problem. For the tropical nation of Guyana, known more for its rainforest and calypso music, a small hiccup such as not having curling ice couldn’t stop them from fielding a mixed doubles curling team.

Farzana Hussain and Ray Hussain, a sibling duo raised in Canada with roots in Guyana, will represent the country at the World Mixed Doubles Curling Championship 2019 in Stavanger, Norway next week. This is the pair’s second year in a row making it to the premier mixed doubles event of the year.

“I think mixed doubles was created to help countries like us, that are small, non-traditional countries to give us a chance to compete,” said Ray Hussain who founded the Guyana Curling Federation after watching Mexico work to develop curling. “Without mixed doubles, we’d have no chance initially to field a team.”

Because the discipline requires fewer elite curlers from an area, it has been an attractive solution for non-traditional curling countries who have a hard time finding four competitive curlers.

“It’s crazy right now the number of different countries that are participating,” said Brett Gallant, who will be representing Canada along with Jocelyn Peterman in Stavanger. “All sorts of countries that we haven’t seen a lot of on the world stage are competing. I think it’s great that we’re getting countries into these events.”

That’s not all athletes see in the sport, though. Many curlers and fans alike are coming to enjoy mixed doubles because of the new challenges and excitement in the game.

“People definitely took a liking to it in the Olympics,” said Korey Dropkin [pictured above, WCF Richard Gray], who represented the United States with teammate Sarah Anderson at the World Mixed Doubles Curling Championship in 2018 and 2015. “It’s very fast paced and there’s always a lot of rocks in play and it’s fun to watch.”

Dropkin certainly isn’t alone in his assessment. “The game is faster, more aggressive,” said Martin Rios, who won silver for Switzerland in mixed doubles with Jenny Perret at the Olympic Winter Games PyeongChang 2018. “I think mixed doubles is more offensive.”

The fast-paced game presents new challenges to athletes who are excited not just by the physical demands of the sport but also the team dynamics inherent in the game.

“It’s probably even harder because you just have two opinions and somebody has to make a decision,” Rios said, “you have just one person to argue with. Team dynamics are really different. Maybe also because its a man and a woman.”

Dropkin shared similar sentiments, “It’s a different dynamic out there when you’re with someone of a different gender. I think it can be fun. It can definitely be frustrating too.”

As the discipline grows in popularity — the number of teams at the next Olympic Winter Games, in Beijing, China, will increase from eight to ten — efforts to make it highly competitive at its upper levels have been met with approval from athletes. The mandate from the World Curling Federation to change the structure of the World Mixed Doubles Curling Championship works to make the event more elite.

“Honestly I think it was necessary,” said Rios. He’s so passionate about the potential of mixed doubles that he one day dreams to see a larger world tour organised similar to tennis, with multiple events centered around several global hubs each year.

That might be years away, but for now, tweaks to the qualifying structure can help all athletes improve. “For the world championship you want to make sure the competitive teams are battling each other,” Gallant said.

That gives countries from less traditional curling regions the chance to participate and work their way up to the top of the world rankings, gaining exposure along the way. It’s that global recognition that continues to feed curling’s growth around the world. Guyana might just be the best example of this.

Right after arriving home from the World Mixed Doubles Championship last year, Hussain received emails from three other men from Guyana looking to put together a men’s team.

They joined forces and the result was that Guyana entered the Americas Challenge for the first time ever last November.

“Mixed doubles gave us the exposure to find three other guys to let us play in the Americas Challenge,” said Hussain. “It helps us as a small country compete and not be blown away.”