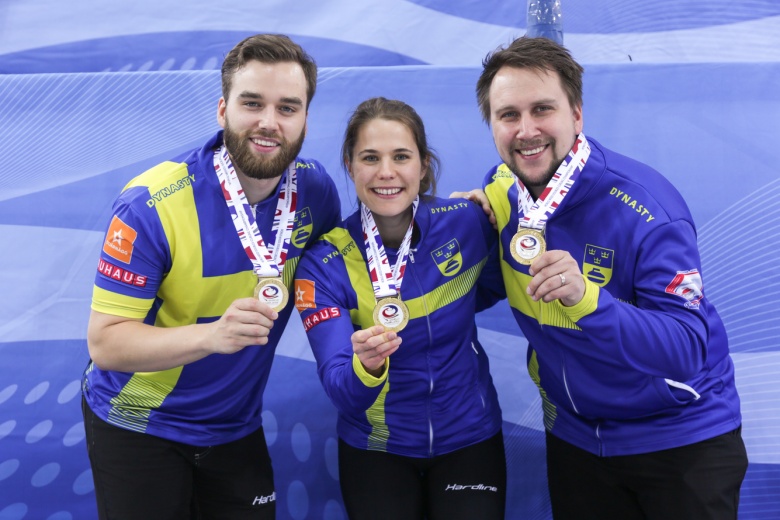 Sweden have won gold at the World Mixed Doubles Curling Championship 2019 in Stavanger, Norway, beating Canada by a score of 6-5.

After losing 6-7 to Canada earlier in the week during the round robin, the Swedes – Anna Hasselborg and Oskar Eriksson – reversed their fortunes this time around, ultimately thanks to a final draw to the button on the last stone of the eighth end. This is Sweden’s first world mixed doubles title.

“That was a really good game,” said Sweden’s Eriksson. “From the get-go, we played really good. Ice was perfect for the final.”

Canada – Jocelyn Peterman and Brett Gallant – took an early lead in the game, earning one point in the first end. Then Sweden answered back by taking a point in the second end and the game was tied.

In the third end, with the last stone, Canada attempted a difficult promotion take-out that, if successful, would have given them a possible three points. Canada missed the shot and Sweden earned one point.

Eriksson, who earned a world title earlier this month at the Pioneer Hi-Bred World Men’s Curling Championship 2019 – in Lethbridge, Canada – executed an important hit-and-roll in the fourth end that again put the Swedes in position to steal a point. Sweden’s Hasselborg, then drew to the button with her last shot and Canada, who had hammer, were left without a shot to execute, opting to purposefully send their stone through the house. At the break Sweden were ahead, 3-1.

The Canadians were able to tie the game in the fifth end, but the Swedes grabbed another two points in the sixth end after opting to use their Power Play. In the seventh end, Canada earned two points but, in doing so, gave Sweden the hammer coming home in the eighth end. This proved to be the deciding factor.

“We had a chance to make the last draw — and we made that,” said Sweden’s Olympic gold medallist Hasselborg after she executed a draw on her last stone to win the game for Sweden.

After the game, silver medallist, Canada’s Gallant, said, “It’s not what we came here for but, you know, Oskar and Anna played really, really well. Today wasn’t our best effort but the way they played they deserved to win.”