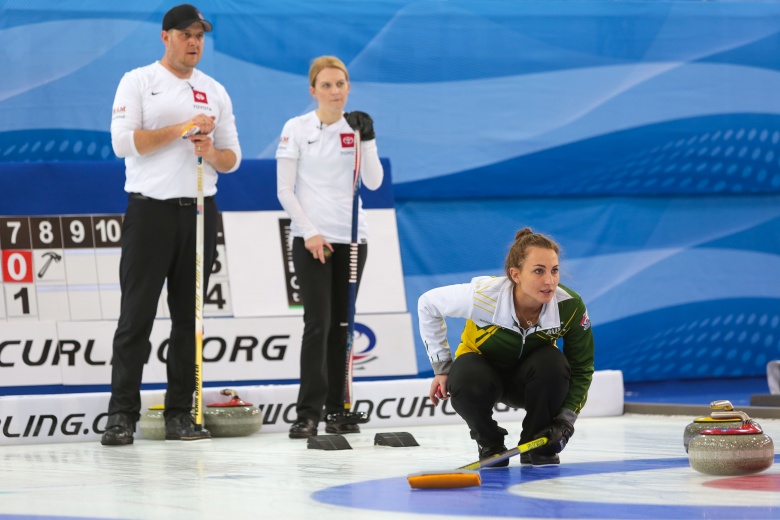 United States have won bronze medals at the World Mixed Doubles Curling Championship 2019, in the Sørmarka Arena, in Stavanger, Norway.

It took an extra end to close out Australia but United States – who are Cory Christensen and John Shuster – ultimately prevailed, winning by a score of 5-4.

“It was our goal to medal here and to do it for U.S. is amazing and exciting,” said American Cory Christensen.

They fought hard for their win, coming back from an early point deficit. Australia started the game with the hammer and controlled the first three ends, earning a point in each. Down 3-0 in the fourth end, United States used their Power Play and scored one point, at which stage they started to apply pressure on their opponents.

It was to be a game marked by missed chances for Australia as their lead began to slowly unravel.

“It’s mixed doubles, so even if you go down early, you always have a chance in mixed doubles if you can make a few,” said American John Shuster who proved this statement correct in the last half of the bronze medal game.

In the sixth end, still leading the game with a score of 3-2, Australia had a chance to take one point with the hammer. Instead, they came up light on a draw to the button and the Americans stole one point.

With the score tied at three points apiece heading into the seventh end, the Australians used their Power Play. Again with the hammer, they had the opportunity to take out one yellow stone and score a possible five points. Instead, the Australian stone was delivered wide of the target, allowing the United States to again steal one point and this time move in front, at 4-3.

However, they narrowly missed edging out the second American stone in the four-foot. Had they been able to, the second Australian stone outside the four-foot might have added an extra point and allowed them to win the game. Instead, Australia tied the game and sent it into a ninth end where the Americans took one point.

“It wasn’t an easy task out there,” said Australia’s Dean Hewitt. “They put the pressure on us there for a lot of the ends and they played great and really fought back.”

Despite the loss, this was an all-time best finish for Australia in mixed doubles.

Playing for gold are Sweden and Canada. This game is live on World Curling TV (geo-blocking may apply) and national broadcasters.

The gold medal final is at 16:00. Times are Central European Summer Time, which is +2 hours from Greenwich Mean Time.