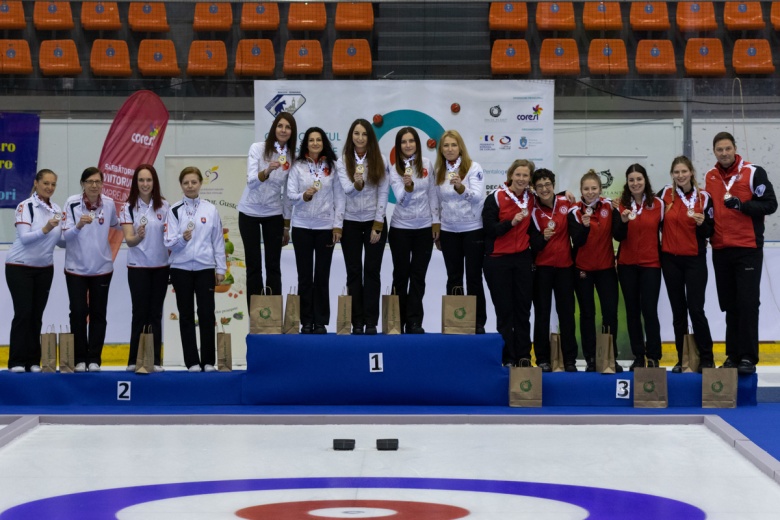 Slovakia women and Bulgaria men also qualified for the B-Division after winning the silver medals.

In the gold medal game, Belarus women, skipped by Alina Pavlyuchik, third Susanna Ivashyna, second Aryna Sviarzhynskaya and lead Marharyta Dziashuk fought back from a 5-0 deficit after four ends by scoring three points in the fifth end against Slovakia.

Belarus went on to steal one point in the sixth end to narrow the gap, 5-4, and then scored two points in the ninth end to level the game 6-6 heading into the final end.

In the tenth end, Belarus stole two points to win the gold medals by a final score of 8-6 and secured their place in the B-Division of the European Curling Championships.

With a stolen point in the fifth end, France maintained control at the fifth end break 6-0. Bulgaria responded with two points in both the sixth and eighth ends to tighten up the game at 7-4.

France scored a single point in the ninth end and went on to claim the gold medals and a trip to Sweden for the Le Gruyère AOP European Curling Championships 2019 B-Division with a final score of 8-4.

In the silver medal games, Slovakia women beat Austria 8-4 and Bulgaria men beat Slovenia 7-6 in an extra end to secure their spots in the B-Division in Sweden as well.

Full results from these championships can be found at www.worldcurling.org/ecc2019

To engage with the World Curling Federation on social media in the build up to the Le Gruyère AOP European Curling Championships 2019 follow it on Twitter, Instagram (@WorldCurling) and Facebook (@WorldCurlingFederation) and use the hashtags when posting: #ECC2019 #curling