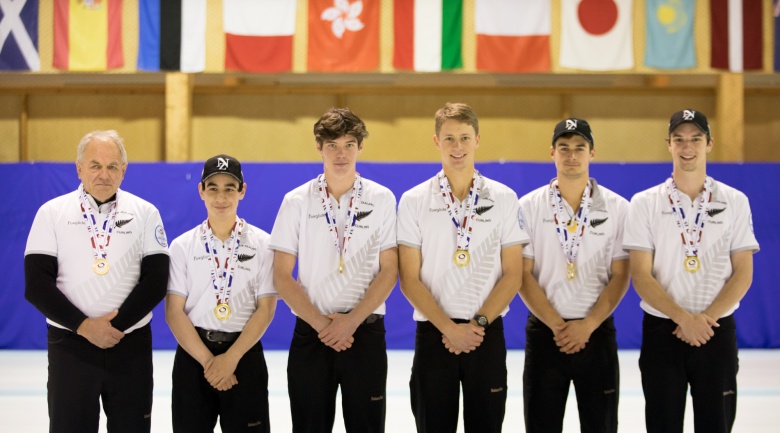 New Zealand made history by defeating Italy, 8-4, to win gold in the men’s World Junior-B competition, in Lohja, Finland and progress to their first ever world junior championship.

Meanwhile, Scotland women returned to the world junior curling championship at the first attempt after defeating Russia 5-3 to win the gold medals on Thursday.

Scotland – skipped by Beth Farmer, with third Kirstin Bousie, second Kate McMillan, Lead Nicola Joiner and with support from alternate Amy Bryce and coach Alison Cunningham – completed their championship undefeated with a 5-3 win over Russia, where they stole single points in the seventh and eighth ends.

Afterwards, Farmer said, “It feels really good, we worked hard all season and really pushed it this week and my team worked really, really hard for it. We played very well all week, we went undefeated so that feels good. Some games were closer than others, but all the teams have been great.”

After their historic win, Neilson said, “The team is super excited. We’ve put a lot of work in throughout the year. It’s an unreal feeling to have progressed over the last four years and to take the gold. I’m very, very happy.”

Neilson continued, “Going to the worlds is huge, for New Zealand as well, being such a small country in curling. This is the first New Zealand team to go the [junior] worlds and we’re ecstatic about it. It pays off all that training we’ve put in over the last year so I’m very, very happy.”

At the same time, China defeated Korea, by 6-4, to win the bronze medals and claim the last place in the men’s world junior championship alongside New Zealand and Italy.

Scotland, Russia and Japan women alongside New Zealand, Italy and China men will now progress to the World Junior Curling Championships 2019 being held in Liverpool, Canada from 16 to 23 February 2019.

For all the results from the championships visit the World Curling Federation’s event website (www.worldcurling.org/wjcc2019) and social media channels. To engage with the World Curling Federation on social media about the World Junior-B Curling Championships 2019 follow it on Twitter, Instagram (@worldcurling) and Facebook (/WorldCurlingFederation) and use the hashtags when posting: #WJCC2019 #curling