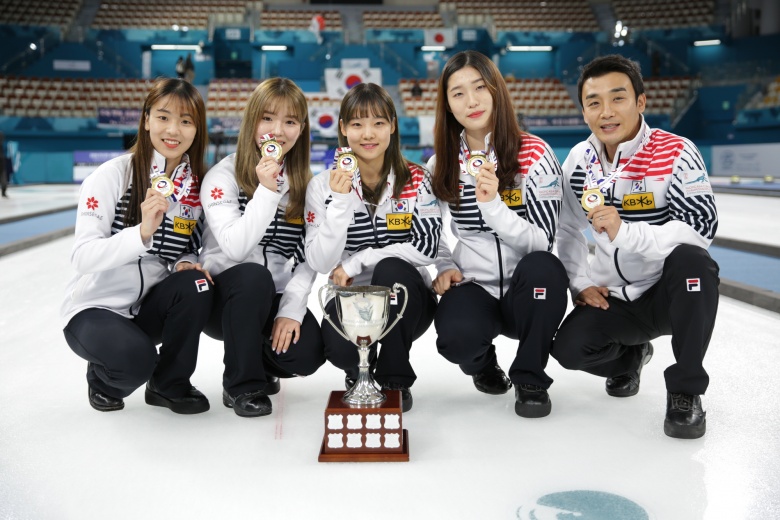 Korea have won the Pacific-Asia Curling Championships 2018 women’s gold medals and title by defeating Japan, 12-8, on Saturday (10 November) afternoon in the Gangnueng Curling Centre, in Gangneung, Republic of Korea.

Both Japan and Korea have also qualified for the World Women’s Curling Championship 2019 in Silkeborg, Denmark.

Japan opened the scoring in the women’s gold medal final with a single point when skip, Satsuki Fujisawa played a take-out with her final stone.

Japan responded with two points of their own in the third end when Fujisawa – alongside third Chinami Yoshida, second Yumi Suzuki, lead Yurika Yoshida and with support from alternate Kotomi Ishizaki and coach J.D. Lind – drew her last stone into the four-foot.

Korea tied the score in the fourth end with a single point, before Japan responded in the fifth end when Fujisawa played a precise hit-and-roll to remove the lone Korea stone in the house for a score of three points and a 6-3 lead at the break.

After the teams returned from the break, Korea scored two points in the sixth end when Kim drew her last stone into the eight-foot after a full-team sweep and reduced Japan’s lead to 6-5.

Korea then stole two points in the seventh end when Fujisawa’s take-out attempt of the Korea shot stone in the four-foot was thin, causing it to jam on a stone in the eight-foot and Fujisawa’s shooter to roll out of the house.

Japan retook the lead in the eighth end when Fujisawa hit out a Korea stone from the four-foot to score two points.

A double take-out by Kim in the ninth end for a score of two points regained Korea the lead. Then in the tenth end after Fujisawa’s draw with the final stone over-curled and came up short, Korea stole three points to win the game, 12-8, and took home the 2018 Pacific-Asia women’s title and gold medals.

Afterwards, Korea’s gold medal winning skip, Minji Kim said, “Before this game I and my teammates, we all tried to talk about this game and we tried to enjoy this game, not to feel the pressure. We are still juniors, this is our first time to be in the women’s competition at the Pacific-Asia championships and we learned lots of things from teams like Japan and China.”

Japan’s silver medal winning skip, Satsuki Fujisawa spoke after their loss, saying, “In the later ends, the Korean team was very good at weight control and sweeping, showing a good control over there, while our team’s weight was a little too heavy, this was our weak point. Today was actually a good experience, we had a great audience and we had the Olympic atmosphere, so it was good.”