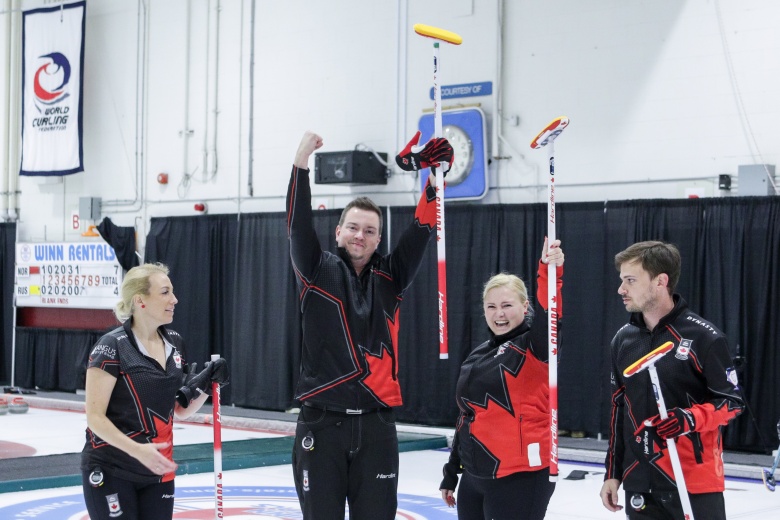 It was the first time the two teams met throughout the championship, and first ever world final appearance for Spain.

Mike Anderson, skip of Canada, backed by vice-skip Danielle Inglis, second Sean Harrison, lead Lauren Harrison and coach Jim Waite opened with two points in the first end, followed by a steal of one point in the second end.

In the third end, Spanish skip Sergio Vez attempted to split two stones into the rings, but settled for one point.

After a blank end in the fourth, Canada was forced to a single point in the fifth end with a delicate tap to the button to make the score 4-1.

The turning point came in the sixth end, when Vez rolled out on a take-out against three Canadian stones, giving up a steal of two points to the home-crowd favourites.

Scoring a single point in the seventh end wasn’t enough for the Spaniards, ending the game, 6-2.

Anderson said after the victory, “we kind of had that feeling yesterday morning [at the start of the playoffs] that we were in the exact same situation as we were when we won the nationals. You’ve got these games ahead of you; just put your head down and go. When you wake up with that feeling, it just makes everything a bit easier.”

The Canadian squad marks it’s eighth year playing together, “it’s crazy; I started playing Sean when I was 14 or 15 and it’s really cool to win with him. And to do it in Canada; I guess we were a little disappointed when we found out we wouldn’t be going to Europe, but after this whole week, I would argue with anyone who says going abroad to play a world championship is more fun. The crowds here, to hear the hooting and hollering and stomping, it makes the game that much more fun.”

After the game, Vez, reflected on the match, “this will look better in a couple of hours, but I’m personally really disappointed right now. I played probably one of my worst games this week. My team played quite well, I missed some chances on shots I probably could have made.

“The support here was amazing. We tried to keep our emotions together. The crowd was not against us, they were with Canada. We know that most of the teams here were cheering for us, so that’s really special for us.

“I’ll take this in the next game and if I play in a world championship final again it will be great and I’ll remember this.”

The bronze medal game featuring Norway against Russia was a much tighter affair, coming down to the final stone.

Russia, skipped by Alexander Eremin, battled their way back after being down 4-7 after six ends to win the bronze medal, 8-7.

Norway took a solid lead after Eremin’s final stone in the sixth end picked, giving the Norwegians a steal of one to lead, 7-4.

Playing the seventh end, Russia put their heads down and scored three points to tie the game 7-7 heading to the home stretch.

In a tense eighth end, Russia cluttered the house, making it difficult for Norway to score, stealing the game 8-7.

The bronze medal winning skip commented on the game’s turning point, “after the pick in the sixth end, our team became really angry and just wanted to make every shot and play the best we could.

“Getting a bronze medal at the world mixed is unbelievable. For two of the players on the team [Maria Komarova and Daniil Goriachev] they have already have been recognised internationally, but for me it’s my first time and it feels fantastic!”

For the final round-robin standings and all the scores from the championship visit http://wmxcc2018.worldcurling.org/