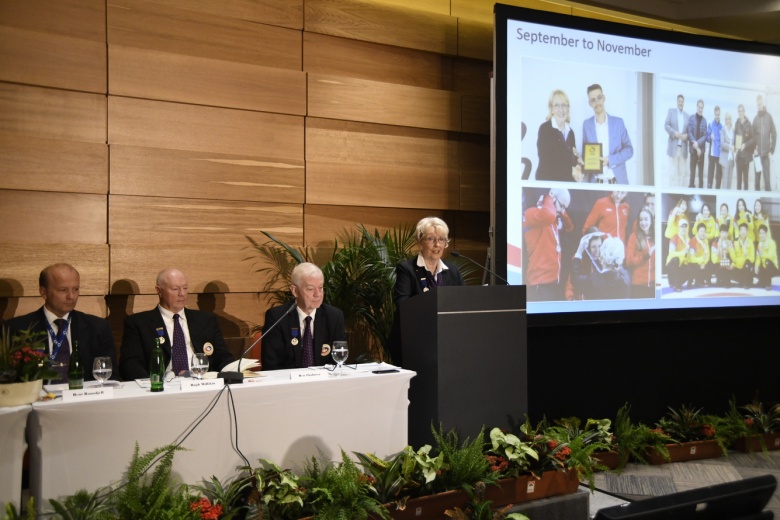 The Members Associations of the World Curling Federation have voted to change the format of the World Mixed Doubles Curling Championship after an emergency motion was made by the representatives at the Annual General Assembly in Budapest, Hungary.

In addition, World Curling Federation President Kate Caithness has begun her third, four-year, term in office after representatives from the organisation’s 60 Member Associations voted unanimously for her unopposed bid.

Also, on Sunday (9 September), the first African Member Association was voted in as a provisional Member. Nigeria will become a part of the Pacific-Asia zone, meaning the name for this zone will be changed in future. This takes the total number of Member Associations to 61.

Caithness said: “This has been another productive Congress, in Budapest. My thanks go to the Hungarian Curling Association who put on a first-class gathering and who have welcomed us warmly the past few days.

“After a healthy debate, our Members have tasked the Federation with adopting a new format for the World Mixed Doubles Curling Championship – our newest Olympic Winter Games discipline – to improve its elite status.

“This has been a particularly special Congress and Annual General Assembly for me, as I begin my third term in office. Dedicated curling facilities have always been and will continue to be my priority, however knowing how quickly the last eight years have passed, I must look to the future regarding succession planning to ensure when it is time for me to hand over the baton, the knowledge and experience I have gained during my terms in office will be passed on to my successor.

“I am also delighted to welcome Beau Welling onto the Board – he will bring a wealth of knowledge to this position – and a warm welcome to Nigeria, our 61st Member Association and very first African Member.”